Pawar nets V.C. Shukla but Congress can't do much about it. Poll realities ensure it just grins and bears it. 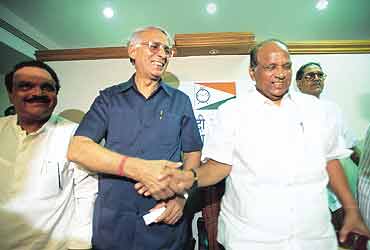 outlookindia.com
-0001-11-30T00:00:00+0553
The NCPp embracing Congress dissident V.C. Shukla in Chhattisgarh and its overt flirtations with disgruntled veteran K. Karunakaran in Kerala has given the Congress leadership more reasons to be upset. The high command sees this as the latest example of the NCP's perennial game of backstabbing. But there's a catch. The success of the Congress-NCP combine in this month's elections to local bodies in Maharashtra means NCP supremo Sharad Pawar may once again get away with fishing in troubled waters.

While a marginalised Shukla hitched his wagon to Pawar's, Karunakaran hasn't done so despite loaded signals. "These are separate states. Why should events in one state affect another?" says CWC member and Maharashtra in-charge Vyalar Ravi, who won a Rajya Sabha seat against Karunakaran's nominee in the April 14 poll. "Our alliance is limited to Maharashtra," counters NCP MP and spokesman Praful Patel. "Or else, we will have to close shop in other states. In any case, our overtures in Meghalaya and Gujarat were not acceptable to the Congress."

The Congress-NCP combine routed the Shiv Sena-bjp in elections to two local bodies in Konkan and Jalgaon earlier this month (and in the zilla parishad elections last year). This is a clear indication that their best bet of coming back to power in Maharashtra is by persisting with their coalition. The combine's inroads into Konkan, hitherto a Shiv Sena bastion, is particularly significant.

Congress leaders in Maharashtra are not shy to admit that the NCP has emerged as the dominant partner in the local elections. In the Kankavli Nagar panchayat elections and the Jamner municipal poll, the lion's share of seats—more than 75 per cent—went to the NCP. In the zilla parishad polls too, the NCP has outperformed the Congress. This, despite the fact that the NCP is the junior partner in the coalition, with 55 assembly seats to the Congress' 74. A section of the Congress feels too much should not be read into the NCP's success: "We had given them more seats, so they won more," says a Congress leader. "If we don't fight together we are sure to lose, especially with the anti-incumbency factor looming as a threat. The Congress, being a national party, may still survive, but the NCP will be decimated."

For Pawar, a pre-electoral alliance with the Congress is vital. Of late, the NCP has been pushing the Congress to cement an alliance. Fomenting trouble in Chhattisgarh and Kerala (as earlier in Gujarat) could be a bargaining ploy, a part of pressure tactics. "We want to know where we stand. You can't run a government together and then start abusing each other just before the elections," says Patel. Hence the attempts at rapprochement with Congress president Sonia Gandhi, with the NCP's spin doctors trying to project the invitation to an opposition get-together at her residence as a transparent overture from the Congress.

The Congress leadership is deeply divided, with the anti-NCP faction fearing the prospect of Pawar becoming a player at the Centre. If the Congress-NCP combine were to sweep the assembly and Parliament polls (to be held simultaneously), the NCP could have enough MPs to become a possible coalition partner in Delhi. And that will be dicey for the fledgling heavyweights in the Congress.

Pawar's desperation to forge an alliance does not fit in with his open invitation to the Congress dissidents in other states. "But Pawar actually had no role to play in Chhattisgarh and Kerala, where the rebellion was independent. It did not happen because of him," says Rajya Sabha MP and Pawar-baiter Prithviraj Chavan. By inducting Shukla and hinting at a split in Kerala, Pawar is merely playing to his home constituency which sees him as a national leader who dared to defy Sonia and 'the dynasty'.

In Chhattisgarh, Shukla's defection is a setback to the electoral prospects of the Congress. In Kerala, the Congress leadership is reluctant to take action against Karunakaran for fear of pushing him into the NCP's arms. Karunakaran, who openly defied the high command in the Rajya Sabha poll this week by propping up his own candidate, is believed to command the loyalty of 21 mlas—the exact number required for a split.

For the moment, the Congress has no option but to break bread with Pawar. And knowing this, the Maratha strongman has been giving a few not-so subtle shocks to the Congress leadership. Blowing hot and cold seems to be the only way he can play the deceptive chess game of coalition politics.