A revised CBI petition on Babri, the final Liberhans report, darts from foes and friends... Advani's seat is hot. 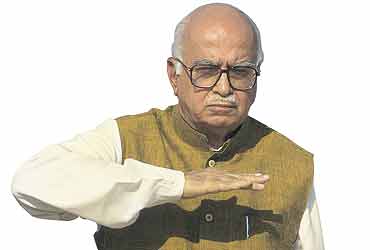 Clearly, Advani remains wedged between a temple and a hard place. And more clouds are gathering on the horizon. The Liberhans Commission report into the Babri demolition and accompanying violence is reportedly close to completion. If the commission of inquiry indicts Advani, he can remain BJP president but will he choose to remain the leader of the Opposition, a constitutional post?

If he has to quit, it would be a setback for the BJP whose numbers and talent in the Lok Sabha have been badly depleted—the second-rung leaders are mostly members of the Rajya Sabha. So, there is speculation over whether the BJP will again trudge back to Atal Behari Vajpayee and persuade him to play a more proactive role. There is already evidence of Advani turning to Vajpayee for help in negotiating both the Sangh and NDA allies. Last week when the Atal-Advani combine landed up at Keshav Kunj, the RSS Delhi headquarters, a section of the press described it as an act of appeasement. Yet sources reveal that Advani requested Vajpayee to accompany him because the ex-PM's stature is more commanding and he can stare down the RSS leadership.