The mutiny in the Bangladesh Rifles raises larger questions 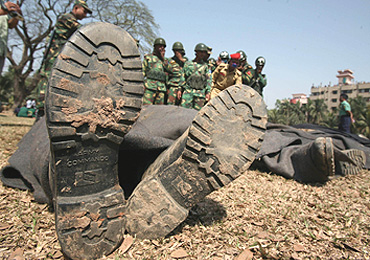 As Dhaka bustled around on the morning of February 25, the sound of rapid gunfire shook the city, sending many diving for cover in the upmarket Dhanmandi area and its vicinity. Unfolding inside the Bangladesh Rifles (BDR) headquarters at Pilkhana was a full-blown mutiny. With their faces covered and sporting red headbands, the mutineers took charge of the Pilkhana complex and its adjoining Rifles Square market. Over blaring loudspeakers, the rebels aired their grievances, demanding a hike in salaries and accusing their officers of corruption.

At the time, nobody knew that the mutineers had killed 60 officers—the same officers from the army who train and lead the BDR soldiers and lower-ranking officers recruited directly. The bodies were discovered later from shallow graves. One survivor, Lt Col Shams, told reporters, "Most of the officers were killed by 11 am. It was horror...mayhem." Thirty-three hours after the mutineers surrendered on PM Sheikh Hasina Wajed’s promise of general amnesty, one rescue worker quoted a BDR soldier at the complex saying that "the plan was chalked out long ago. The ones who committed the atrocities were young soldiers. They had got huge sums of money from somewhere...didn’t care for careers".

As the mutiny in Dhaka and eight other places got capped, few could believe that a demand for pay hikes had sparked off such horror. Sure enough, the police soon arrested suspected members of militant outfits Hizb-ut-Tahrir and Hizb-ut-Tauhid in Dhaka and the nearby industrial town of Tongi for distributing leaflets on the mutiny. One of these said, "Raise your voice against the Indian conspiracy to destroy the army and the border guards, and the government’s inaction."

The mutiny reminded many of the atrocities committed by the Pakistani army and their local collaborators during the ’71 independence war. Since then, the Bangladesh story has been one of coups and counter-coups. Most of the family of Sheikh Mujibur Rahman, the country’s founder, was killed in a ’75 coup; Hasina and sister Rehana escaped as they were abroad.

Veteran diplomat Waliur Rahman points fingers at the ultra rightists, Islamist groups and Pakistan’s ISI. Citing the street marches organised in support of the mutineers, Waliur says the attack was aimed at "destabilising and overthrowing the government". He picks on passages from Pakistan’s US ambassador Hussain Haqqani’s book Pakistan: Between Mosque and the Military to validate the fact that the ISI destroyed the political establishment in Dhaka (was even labelled the ‘Invisible Saviours of Islam (ISI)’). He also quotes US expert Stephen Cohen who reckoned the ISI wanted the "Pakistanisation of Bangladesh". Waliur also speculates about the role of the religious party, the Jamaat-e-Islami, in the mutiny: "I smell the hands of the fundamentalist Jamaat—the seizure of 10 trucks of ammunition earlier and then the attack on Sheikh Hasina in 2004 should not be seen separately from the mutiny," he says, adding that those who didn’t want the new government to carry out its pledge of putting on trial the 1971 war criminals were the beneficiaries of such instability.

Incidentally, early in February, Pakistani President Asif Ali Zardari had sent special envoy Zia Ispahani to Dhaka to stall the war crimes trial of Pakistanis involved in the 1971 atrocities. But his trip was a debacle of sorts after he told reporters that "we should look forward". Bangladeshis didn’t take kindly to this advice. About the trial, commerce minister Faruq Khan added, "The people gave us a mandate and, inshallah, we will fulfil our pledge on trying the war criminals."

Civil society leaders from various spheres have named Jamaat leaders Golam Azam and Motiur Rahman Nizami, among others, as war criminals. They, of course, deny these charges. After the mutiny, Jamaat amir Nizami held a press conference to demand that Hasina answer 12 of his questions on the whole dastardly episode. He opposed the announcement of amnesty (hailed for keeping the casualties low) on day one, and wondered why the army wasn’t deployed and how hundreds of BDR soldiers had fled. Questioning TV channel CNN-IBN’s attempt to link the Jamaat to the mutiny, as also the Calcutta-based Anandabazar Patrika’s malicious "anti-Islamic" campaign, Nizami alleged, "Through this false gossip, efforts are under way to turn events towards a different end. This revolt was instigated by those who want to turn Bangladesh into a ‘subservient nation’...to weaken our armed forces."

But between these two extremes, of one group blaming the ISI and the other accusing India of fomenting a mutiny, are those who would want incontrovertible proof before naming the ubiquitous ‘outsider’. As Maj Gen (retd) A.N.M. Muniruzzaman, president of the Institute of Peace and Security Studies, says, "So far, I do not have any evidence of either agency’s involvement.... By the scale, nature of ferocity and attack, there is every possibility that the attack had links beyond the BDR and outside the country. The purpose was, obviously, to destabilise Bangladesh’s new government." Former army chief, Lt Gen (retd) Mahbubur Rahman, who quashed a 1995 mutiny and foiled an army coup in 1996, thought "hired mercenaries" were involved on February 25, saying that the army had never witnessed killing of its officers in such numbers. "The military showed patience and respect for a democratically elected government by doing what it said."

Anyway, this one time the truth is likely to come out soon. The army-led ‘Operation Rebel Hunt’ has arrested the alleged mutiny kingpins, BDR deputy additional director Touhidul Alam and five other rebel leaders. In custody, they should begin to sing soon about, among other things, the foreign hand behind the February 25 horrors. Hopefully, this will bring an end to the cycle of meaningless bloodbaths in Bangladesh.

By Nadeem Qadir with Julfikar Ali Manik in Dhaka