The nuclear deal lies haze-wrapped. Rural India just tries to cope with a price rise squeezing dry its resources with its whimsies. 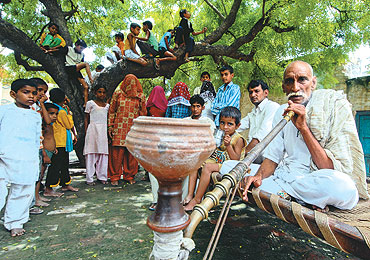 1. Awareness of the nuclear deal seems to be strikingly low, especially in the villages of the Hindi heartland, despite hours of TV debates and the daily headlines.

2. All over the country, rising prices are a much more emotive issue, and they are mostly seen as the fault of the Centre. From drinking tea with gur instead of sugar, to giving up rice and going without meat or fish, or cooking a hot meal just once a day, ordinary villagers are having to cut back in myriad ways.

3. Even those who are aware of global factors behind inflation feel the situation has not been managed well. The price rise is all-encompassing, and seems to have nothing to do with whether goods are transported over long distances or not, they point out. Unscrupulous traders are having their day, they say, unchecked by central or state governments.

4. In West Bengal, where awareness of the nuclear deal is relatively high, Muslims don't seem to feel very differently about the deal from Hindus, contrary to the CPI(M)'s claims.

Ghasera is several kilometres and worlds away from the sky-reaching towers of Gurgaon. It's here that Gandhi once stood and persuaded the Meos, a pastoral community concentrated in a rural swathe across parts of Haryana, Rajasthan and Uttar Pradesh, to turn their bullock carts around in 1947, instead of fleeing to Pakistan. Like scores of villages in Mewat, or the Meo homeland, Ghasera is poor, large, populous and mostly Muslim—to the extent that Meos fit the type (though known for their pre-Muslim traits, they conform to the 'poor and backward' characterisation). And as often happens, the next village along the dusty track, Chachera, is very different. Smaller, richer, dominated by Jats and Brahmins, its people are better educated and many more of its young men have found jobs in the expanding urban sprawl around Gurgaon.

But drop the question, "Should the nuclear deal go through?" in either of these two villages, with their distinctly different identities, and the response is largely the same—blank stares and shrugs of incomprehension. Even the few who seem to have registered it are hesitant to comment, criticise or endorse. "It is an international matter," says Chachera's elderly sarpanch, Mitter Sain, who has an opinion on everything else, from Sonia Gandhi's foreign origins to protecting the peacocks that fly flamboyantly around his village. If "Muslim masses" oppose the deal, as a CPI(M) politburo member controversially claimed recently, Ghasera's newspaper-reading, Tata Safari-driving businessman-sarpanch, Ashraf Khan, does not know about it. "We don't have a view about the nuclear deal," he says simply. What about the America factor? "Jo America mein hota hai usse hamara kya matlab?" asks a farmer, Mohammed Haroon, indifferently. In short, the N-question, even if it is being discussed non-stop two hours away in Delhi, with the timing of an election hanging on it, is about as relevant in these parts as asking: "Should Pluto be classified as a planet?"

As Outlook correspondents found, the story is not dramatically different in other villages of the country—despite acres of newsprint and hours of TV debates generated by the deal. Gorakh Ram, a 55-year-old cowherd in a sleepy north Bihar village is understandably blank, but his educated landlord Shivanand Mishra only a shade less so. "Yes, I have heard on the TV that there might be elections soon. Communists are going to withdraw support to Sonia Gandhi's government. It is something to do with selling out the country to America," is all the patriarch had to say. In Poulidoddi village in Karnakata's Ramanagaram district, however, there is zero awareness of the deal.

Not surprisingly, West Bengal and Kerala are exceptions—responses show not just awareness, but divided opinions. But there is little to tell Muslim voices from Hindu ones, and many seem willing to leave the final call to "experts". Articulate Sheikh Shamshul, 43, who runs a grocery shop in Pursa village in Bengal's Burdwan district, is generally wary of overly close ties with America, but on the deal he says: "Let all parties look at the deal dispassionately in the national interest and see what must be done. It should not be politicised." Three out of four Muslims interviewed in this village were either supportive or sceptical about the deal, and even Mir Nawas Mollah, who opposes it, is careful to add that it not because of the US's actions in Muslim countries. "I am speaking as a citizen here, not a Muslim. We should chart an independent foreign policy."

In Vithura village in Kerala, some 30 km from Thiruvananthapuram, Krishan Kutty, a road worker who earns Rs 400 a day, also makes plain his mistrust of America, and by extension the deal. A stone's throw away, a retired employee of the state corporation, Ankara Narayana Pillai, and several of his friends, back Prime Minister Manmohan Singh. "When China surges ahead as a superpower India requires a tie-up with the US. This is logic, there is no politics in it," Pillai says matter-of-factly, dispensing provisions at the shop he runs. "I don't think Manmohan Singh will compromise on national interest," adds his friend V. Balakrishnan, a retired junior commissioned officer. It is this way elsewhere too, opinions are divided, but not always along predictable lines, and often expressed with a distinct lack of fervour. 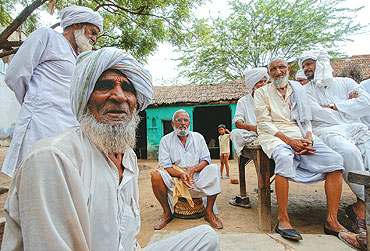 Nuclear deal, what's that? Farmers in a Mewat village

Fervour, it is very clear, from the discussions around pan shops and grocery shops, or at the sarpanch's homes, or in village chaupals, is reserved for rising prices. Haryana villagers who are clueless about the nuclear deal have a litany of complaints about the impact of spiralling prices on their daily lives. "We don't dream of eating rice, except on Id. We put gur in our tea instead of sugar, there's no tadka on our daal, and we cook a hot meal just once a day," say the women of Ghasera mournfully. Many of the poorer Muslims in these parts say they have forgotten the taste of meat. Whose fault is it? Predictably, arguments about the impact of global crude oil prices cut no ice. "Reducing or increasing prices is the Centre's work. They have to take responsibility," says sarpanch Mitter Sain firmly. Rare are the village voices like Pillai's, in Vithura, who argues the petroleum price hike was inevitable in the face of the global spiral. Even in his village, others say there was still no call for increasing the price of lpg.

In Poulidoddi in Karnataka, villagers see the price rise as scarily all-encompassing. Says Doddabeeriah, a middle-aged farmer, "The price of the most essential item, salt, has gone up from Rs 4 to Rs 7 in the last 20 days or so. Cooking oil has jumped from Rs 52 to Rs 70." Diesel price rises have taken their toll, doubling the cost of transporting silk cocoons from their village to nearby Ramanagaram town, about 10 km away. But strangely, the price of transporting a bullock-cartload of sand has also gone up. Dolaiah, a villager, says the rate per cartload of sand has touched about Rs 200 and the rental charges for the cart around Rs 350 per day. This was at least 30 per cent lower 20 days ago.

People in rural Bengal know that globally, prices of oil and other items have risen, but why is the price of everything rising here, they ask angrily. "Not all commodities are imported from outside Bengal. Prices of commodities like potatoes, rice, vegetables, mustard oil, are going up, not because of the fuel price hike, but because the governments (at the Centre and the state) have failed to control and manage this price rise. Big businessmen and traders are making huge profits and no one is acting against them," says Shamshul. "The price of fish caught from the Hooghly nearby has nearly doubled. Why?" asks Mir Niyamat Ali. "We're on a forced vegetarian diet and nothing could be worse for fish-loving Bengalis," says Shyamal Kumar Rui Das, 31, a grocer of Daspara, making clear his sense of deprivation.

"Sign the deal, I say," says his wife Rita, "and concentrate on urgent matters like the price rise. If they (the Congress-led UPA) can't, let them quit. Things are getting out of hand." Even the long-suffering aam aurat is running out of patience.