Aah... the race of this century. China's breathless, maniacal, cocky pursuit of greatness. Versus our mix of sloth, doubt and free oxygen. 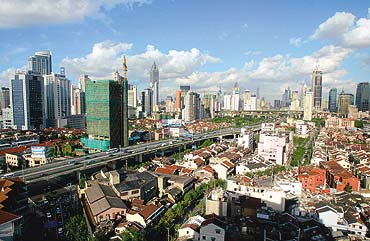 outlookindia.com
-0001-11-30T00:00:00+05:53
"China is a big country, inhabited by many Chinese": the wise words of one of the great statesmen of the 20th century, former French president Charles de Gaulle. As that century drew to a close, another soon-to-be president was being asked if he knew who India's leader was. "The new prime minister of India is...No." George Bush is unlikely to join de Gaulle in the pantheon of great statesmen but it's unlikely historians will look back at this new century and find leaders, anywhere in the world, happily displaying their ignorance of the two most populous nations on earth.

Things have changed very quickly. Just five years into the new millennium, America's National Intelligence Council was hailing the 'Asian century'. India and China, it predicted, were to be the "new major global players" dominating world events in the way America had in the 20th century, and Germany had the century before that. Nobody is arguing with the prediction; instead the talk is about which will be the more powerful.

There's no doubt in the minds of the Chinese. You get a sense here that China hates being spoken of in the same breath as India. It sees itself not as an emerging Great Power but as a re-emerging Great Power. Beijing looks at the catastrophes of the 20th century inflicted on them by foreign powers and home-grown lunacies, like the Cultural Revolution, as a blip in an otherwise long history of 'greatness'. There is much more of a sense of entitlement to Great Power status from Chinese officials when you meet them privately than there is from their Indian counterparts, who still can't quite believe the world is finally taking them seriously.

There's been a lot of talk from both countries about partnership and mutual progress. In reality, the Chinese don't consider India an equal now and can't comprehend the idea of it being one in the future. At best, they see New Delhi as an emerging political power that needs to be contained in South Asia rather than a potential global partner in a new Asian century.

For its part, two things hang around the neck of India's relationship with China like an albatross. The first is the war in 1962. Most Indians, at a gut level, cannot forgive China for what they still see as a gross betrayal even if the recently released cia tapes from the time show New Delhi's remarkable naivety in dealing with Beijing before the conflict.

The second issue is Beijing's relationship with Islamabad. New Delhi believes China views its Pakistan policy primarily through the prism of the impact on India; deliberately supporting policies in Pakistan that will harm its southern neighbour. What particularly sticks in the throats of India's political elite is the belief that without China, Islamabad would still not have a nuclear bomb.

But India is going to have to get over these because the fact is, at the moment, India needs China more.

India's economy is lagging 15 years behind, and China has the huge advantage of its superb new infrastructure. India built its economic boom top down with technology-based industries that did not require a decent road or ports system. China worked from the bottom up, building on cheap labour and low margins to bulk-sell to the world.

China will probably soon overtake the US as India's primary trading nation. That's going to mean more cheap goods flooding Indian markets, undermining already inefficient industries. China has already begun investing heavily to create a hi-tech industrial base in a bid to offset losses in its own manufacturing sector, which is being nibbled at by Southeast Asian neighbours like Vietnam. If India starts losing jobs to China at all levels of industry, then India's fractious polity will start making protectionist noises just like those coming from American Congressmen now. That will make diplomacy with China even harder.

On the face of things, it's hard not to be seduced by China's latest revolutionary zeal. Beijing's gleaming skyscrapers, busy roads and can-do attitude are in stark contrast to the embarrassment that is the Indian capital. Beijing works in a way that Delhi simply doesn't. There are no power cuts or water shortages. The roads are not broken, Beijing doesn't grind to a halt when it rains! Delhi, of course, does not reflect the rest of India or most Indians; but it does reflect the incompetence and corruption that rots away at the heart of India's political establishment. China has, in many ways, got where it is today because of its government. India, with a few notable exceptions, is on the threshold of greatness despite its politicians. Managing the relationship with China may be India's most important foreign policy issue of the next 20 years, it'll certainly be its most complex; India is going to have to do a lot better at running its international relations than it has in the past.

China is going to win the sprint. India may win the marathon but it'll probably require China to stumble. Economic bubbles burst (ask the last bunch of so-called Asian Tigers), and when they do, things get messy. India would cope with that better. It has safety valves—like the ballot box, a free media and the right to get together with a bunch of like-minded people and march down the street hurling abuse at the government—which are enormously stabilising. China simply doesn't. India also supports its entrepreneurs with things like the protection of property rights, something China is still only edging towards. China's desperation to keep its economy going at breakneck speed is based on the need to create millions of new jobs every year. The last thing it wants is a generation of discontented unemployed youths; so it needs to keep them busy doing something, anything but agitating against the state. China's people have been hurtling through the fastest industrial revolution in history. The country's physical infrastructure is breathtaking, but the foundations for a new social infrastructure have hardly been touched. Communism has been replaced by unbridled capitalism—making money at any cost, even if that means producing deadly baby food, poisonous toothpaste or toxic toys. 'Made in China' on the side of the box has recently begun to give people around the world pause for thought. China's answer to too many problems is to quickly execute a few people and hope that's enough. It isn't. Many Chinese obviously feel they are losing their moral compass, which is why one of China's fastest growing foreign imports is Christianity.

So what makes India chaotic, unpredictable and frustrating may also be its saving grace. But India has huge challenges to overcome if it is to catch up. China's economic miracle is the envy of the developing world; but its consequence is millions of people traumatised by the pace of reform. It's humming along nicely now; but to keep a lid on events here if things slide, people will need a legal avenue to properly express their natural frustrations at the state as their lives turn upside down. The only entity around which could provide that is the Communist Party. Which would be a bit like asking turkeys to vote for Christmas.

On The Khushwant Bookshelf