From its earlier tying down of India, China enters a phase of pragmatic diplomacy Updates 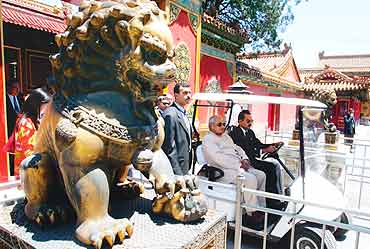 outlookindia.com
-0001-11-30T00:00:00+0553
There's bound to be a lot of hype over a visit that declares a new era of friendship between the two largest nations on earth. You could use several cliches to describe the situation—a Himalayan handshake, a Great Leap Forward, the Tiger befriends the Dragon, Hindi-Chini bhai bhai and so on. The concrete achievements of Prime Minister Atal Bihari Vajpayee's five-day China visit are self-evident. There is, of course, the quid pro quo on Tibet and Sikkim. India has given a more explicit recognition to Chinese authority over Tibet in exchange for the implicit Chinese recognition of Sikkim that now accepts border trade through the Nathula pass in the state.

Even more significant is the decision of both countries to appoint a special representative who will seek a boundary settlement from "a political perspective". Though there had been preparatory work on the Sikkim-Tibet formulation, highly-placed official sources say they were quite amazed when the Chinese premier Wen Jiabao accepted Vajpayee's suggestion that the boundary settlement be elevated to a political level. What the PM actually said translates from Hindi to the following: "I had said during my 1979 visit and I repeat now that the boundary dispute can only be settled if we seek a political solution." The fact that the Chinese agreed immediately showed that the People's Republic has entered a new era of pragmatic diplomacy. The outstanding border issues between India and China refer to Arunachal Pradesh (which the Chinese claim as theirs) and the Aksai Chin region of Ladakh (which the Chinese control and India claims as its own). Official sources say that the Chinese did not even raise the Arunachal question and just spoke of seeking a boundary settlement with India.

There are other parts of the joint declaration that are significant. "The common interests of the two sides outweigh their differences," the statement reads. "Neither side shall use force or threaten to use force against the other." At another place, it states the "friendship between the two countries meets the need to strengthen multipolarity at the international level". And that, "As two major developing countries, India and China acknowledged the importance of their respective roles in the shaping of a new international political and economic order." Moving away from the sole ambit of South Asia, the declaration noted "that the sustained economic and social development in the two countries, representing one third of humanity, is vital for ensuring peace, stability and prosperity not only in Asia but also in the whole world". And finally, the significant caveat that "the improvement of India-China relations is not targeted at any third country and does not affect either country's existing friendly relations with other countries". The reference here is to both the US and Pakistan.

It is, however, clear from the Indian point of view that friendship between the two Asian giants is intended to increase pressure on Pakistan. Says a senior official, "We are showing the world that we are pragmatic and can move along to ultimately accept the reality of the LoAC (Line of Actual Control). The Pakistanis have never accepted the Indian suggestion that the LoC become the international border. By moving towards a settlement with China, we do show up the Pakistani position as being unreasonable."

There's also a clear political spin to the China visit. It is part of the projection of Vajpayee as a man of peace, ready to make compromises for the larger good. An old hand at using the international stage for developing his image at home, Vajpayee may well have made an election speech at Beijing. Says a prime ministerial aide, "He began his 2004 election campaign in Srinagar on April 18 when he offered peace with Pakistan.He's made his second speech in Beijing." Says foreign minister Yashwant Sinha, "What comes out very clearly from the policies of the PM is that he is a man of peace and he is pursuing that path not just at home but on the international stage where he is now recognised as a true statesman."

The prime minister's spin doctors say this will be his pitch for 2004 and if Pakistan does not muddy the waters, he would like to make another grand gesture towards Islamabad before his term runs out. Says a senior official, "He is first and foremost a politician who is in election mode. And the prime minister is very happy with the outcome of this visit for it is both good for India and good for himself."

Yet one of the architects of the visit says that while Srinagar was a political initiative, the China breakthrough "was the pursuit of diplomacy in its classical form". Preparations began last year after premier Wen's visit to India in June 2002. Three months ago a signal was given to the Chinese that it would be convenient for Vajpayee to visit in June between the two terms of Parliament. But the final dates were formally announced only 10 days before the visit due to the sars outbreak in China.

Sources in the Indian embassy in Beijing say that it was the Chinese who suggested the Nathula pass formulation on Sikkim. "They have made it clear that this is their way of eventually formally recognising Sikkim as a part of India," says a senior mea official. But the Chinese version of the joint declaration and the border trade memorandum only reached Delhi a week before Vajpayee's departure. Says an official involved in the negotiations, "Indians and Chinese are both last-minute negotiators and the final details were thrashed out only after the PM landed in Beijing."

Which is why there was visible excitement in the Indian camp when everything went so smoothly. At the heart of the negotiations was principal secretary Brajesh Mishra who has also been appointed India's special representative on the border settlement. Highly-placed official sources told Outlook, "The Chinese have informally promised us that more will follow on Sikkim and it will be soon. Perhaps whenever there is a return visit by a Chinese leader to India, this grand concession will be made." Besides inviting Wen, Vajpayee has also issued an invitation to President Hu Jintao on behalf of President Abdul Kalam.

Vajpayee himself told his aides that the fine print aside, what he found remarkable was the change in the attitude of the Chinese leadership. Chinese strategists say their country is moving out of the phase when it sought to tie India down in South Asia. "Our big concern is now the West and the US. China sees itself as a world power competing with the West. It wants to make friends with developing countries which can be partners in a multi-polar world," says Han Hua, a Sino-Indian expert at the School of International Studies at Peking University. Adds Ma Jia Li of the China Institute of Contemporary International Relations, a think-tank for the Chinese strategic establishment, "There is a change in our attitude because we see a unipolar world as unsafe. And we have seen that in so many international issues, India's position is identical to ours."

So it is that Professor Zhang Jazhe, author of The Elephant and the Dragon, a book on Sino-Indian relations, stresses, "Even if there is not full recognition of Sikkim, that is not important. In time, it will be resolved. What is important is the spirit of the breakthrough and the sentiment behind it. In this new world, we have to focus on our commonalities and ignore our differences." Adds Prof Wang Dehua, a member of the Communist Party in Shanghai, "We have to bury the ghosts of the past. In China, socialism and capitalism are competing to better the lot of our people.You are engaged in the same task in India though your methods are different. We should learn from each other instead of staying apart." Prof Dehua went on to say that in its own way the one-party state is also striving for democracy. "We plan to ensure that more leaders of the Communist party are elected at the provincial level."

Elections can never be far from the mind of an Indian politician. And even as Vajpayee returns to Delhi with images of the Chinese economic miracle, his thoughts must go to how his visit will be judged in the Indian media in an election year. A huge success? A minor sell-out on Tibet? Hairs are still being split on the wording of the joint declaration that "the Indian side recognises Tibet Autonomous Region is part of the territory of the People's Republic of China". The earlier Indian stand was "Tibet is an autonomous region of China." But the semantics apart, Vajpayee's visit has been significant. It certainly is the beginning of a process.

Saba Naqvi Bhaumik with the PM in China