The Centre and state are busy passing the buck, even as the public and transporters run out of gas—and patience 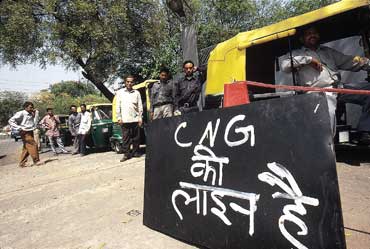 An ambitious and sweeping attempt to make Delhi pollution-free is now turning out to be quite a nightmare. Last week's CNG crisis which paralysed public transport in the capital had all the essential ingredients—the Centre and state working at cross-purposes, red-tapism, myopic planning, favouritism, allegations of kickbacks and foreign jaunts by state ministers and officials—combining to produce something resembling the primordial soup.

Two years ago, in July 1998, the apex court had instructed the Delhi government that by April 1, 2001, only buses, taxis and autorickshaws running on CNG or compressed natural gas should ply on Delhi roads. But like all things else, the directive was not taken seriously enough and when the ban on non-CNG vehicles did come into force, there were only 1,000 buses on the road, only a 12th of the usual fleet size of 12,000 that services Delhi daily.

Not surprisingly, public anger and frustration spilled over onto the streets on April 2, with irate commuters setting buses on fire. Faced with a severe image crisis, chief minister Sheila Dixit put on a defiant, public-friendly front in full-page newspaper ads. These announced her government's intention to ignore the court's order and allow those bus operators to ply their buses who had filed affidavits in the Supreme Court promising to convert to CNG. While Dixit declared that the Supreme Court was "out of touch with reality", her transport minister Parvez Hashmi took to declaiming in martyr-like tones that "the entire cabinet is ready to go to jail" for contempt of court.

The court did relent, perhaps in response to the enormity of the chaos, and gave time till April 14 for bus operators who had filed affidavits to secure a permit to ply their vehicles. But it minced no words in criticising the Delhi government. A three-judge bench observed that it was "an attempt to hoodwink the public, saying that we are ready to face contempt for your cause. Sympathy for the commuters is being used by the government to cover up its administrative lapses and lack of governance".

The ungainly spectacle of a state government and the judiciary in a mutually adversarial mode didn't end here. Reacting to the court's observation that her government had been tardy, Dixit retorted with a litany of complaints: "We never let go of a chance to inform the apex court of our problems. But the court did not appreciate the ground reality, be it the issue of unauthorised colonies or industries or CNG."

But as battlesmoke rose from ever-new fronts, it's becoming clear that the CNG crisis is far from concluded. Fresh doubts are being expressed by the chief minister herself about the viability and safety of the CNG technology. This was after environmentalists quibbled in the media over which fuel best suits Delhi—one set persistently peddled the cause of CNG, while another entered the fray belatedly, saying that ulsd (or ultra-low sulphur diesel) has proved a better bet in cities across the world that are trying to battle pollution.

The issue is muddied further by talk of lobbyism. Sources in the petroleum industry say there is a full-blown war on between the diesel and gas lobbies. The former, which reportedly includes bureaucrats of the Indian Oil Corporation, fears that if gas consumption goes up, diesel demand will fall. It is they who are feeding the public with doubts about the efficacy of CNG.

Ironically, the CNG technology was discussed threadbare in the Supreme Court over the last two years.Detailed reports were submitted on the issue by a string of expert committees. Hashmi, dtc chairman Rakesh Mehta and other officers even travelled abroad to study the viability of CNG. So, the Delhi government's special leave petition in the Supreme Court seeking a fresh review clearly looks like a bid to buy time.

Hashmi now claims that it was the previous bjp regime that told the court, without any realistic assessment, that two years would suffice for diesel vehicles to convert to CNG. "It was after this assurance that the court gave the September 30, 2001, deadline in its order of July 28, 1998." In fact, as far back as November 18, 1996— when no detailed feasibility study existed—Kiran Dhingra, then commissioner-cum-secretary, Delhi, had filed an affidavit suggesting that commercial vehicle owners be encouraged to "purchase CNG autorickshaws and taxis".

Then, Union petroleum and natural gas minister Ram Naik joined issue with the Delhi government, refuting its claim that there wasn't enough CNG and alleging it hadn't provided reliable data about the number and categories of vehicles that would run on CNG.

Hashmi, in turn, rubbished Naik's reported statement that the Delhi government did not keep the Centre informed. In fact, minutes of the petroleum ministry, available with Outlook, show several secretary-level meetings indeed took place between the Centre and the state government. In one of them, on August 18, 2000, Hashmi also met Naik. According to the official minutes, Hashmi "requested that adequate amount of CNG should be available to dtc" and that lpg also be made available as an alternative fuel. In response, Naik said "Indraprastha Gas Limited (IGL) has already made substantial investment to create infrastructure for supplying CNG in Delhi".

Serious concerns over CNG shortage were raised in another meeting, on February 8, 2001. This was attended by Union petroleum secretary P. Shankar, principal secretary, transport (Delhi) Ashok Pradhan and dtc chairman Mehta. The minutes reveal a critical difference in the way the Centre and the state saw the ground situation. They record, in buck-passing officialese, "Secretary (petroleum and natural gas) mentioned that the chief minister of Delhi had informed recently the minister of petroleum and natural gas that on account of shortage of gas supply there may be a serious problem in implementing in full the Supreme Court orders. Secretary (p&ng) emphasised that the facts are otherwise as the slow progress of implementing the Supreme Court's order is not due to short supply of gas but may be due to other factors."

The tit for tat continued. Pradhan, who represented the Delhi government, had declared in the September 2000 meeting that the then "secretary (p&ng) had stipulated a clear time-frame for installation of compressor pumps in dtc depots and this has not been adhered to by IGL." But IGL MD Rajiv Sharma said steps were being taken in anticipation of the growth of CNG-run vehicles. He attributed the slow progress in installing pumps in east and west Delhi "to non-clearance and lack of permission from MCD authorities".

Controversy, in fact, has dogged the CNG project from the very start. A company by the name of Rare Fuel and Automobile Technologies Private Limited was the first to be given the task of converting diesel vehicles to CNG. But somehow it fell out of favour with Hashmi and a new company called Nugas Ltd was brought in.This change had generated much controversy, with allegations pointing to the involvement of former MP and journalist Santosh Bharatiya, a close friend of Hashmi.Initially Bharatiya and Rare Fuel's Sheetal Singh were working together but the day they fell out, Singh's contract was given the go-by.

The Supreme Court may have provided a temporary respite to the capital's transporters and commuters. But the way things are going, the September 30 deadline looks an unlikely target. Still, Delhi's painful transition to a CNG regime, as a test-case gone horribly wrong, is fuel for thought.