Their sales were anyway soaring. Now there'll be more small cars—and officially so. 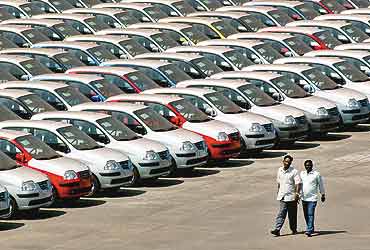 Chidambaram rationalised this micro-tinkering of the duty structure with a customary big-picture visionary statement. "I am confident that industry will seize the opportunity to make India a hub for the manufacture of small and fuel-efficient cars," he said. But, within a few hours, the script soured. Some of the auto majors were questioning the FM’s thinking on both the small- and the big-picture fronts. Was it really a good move to reduce duties only on small cars? Will the cuts help India become a global manufacturing hub for small cars?

Not quite. Laments Rajeev Chhaba, president and MD, General Motors India: "The budget is not on expected lines. We wanted the duties to be reduced on all cars." Many feel the FM has distorted the existing level playing field to largely favour one carmaker, Maruti Udyog (see box). Notes a senior manager at Honda Siel: "The proposal has changed the rules of the game. In the uniform duty regime, the customer decided which model to purchase as per the needs. Now, they will opt for smaller cars by default because of the higher price differential." Chhaba is trying to goad SIAM to ask Chidambaram to reduce duties on mid- and large-size cars too.