The CSE is not impressed by the Centre's clean chit. Over to consumer awareness and more restrictions Updates 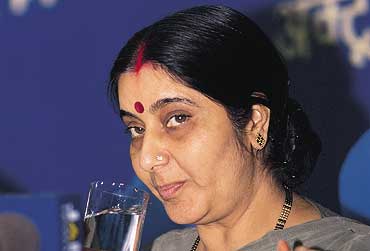 outlookindia.com
-0001-11-30T00:00:00+0553
Last Thursday, in the seventh floor suite of a Delhi five-star hotel, Pepsi managers are suppressing high-fives. Rajiv Bakshi, the Pepsi ceo, bursts into the room with a flourish. "Pepsi's good," he announces with a Pepsi bottle in his hand. On the floor above in the same hotel, Coke's president Sanjiv Gupta pours out the nth cola of the day to celebrate. Does he only have Coke, we ask him. "No," he nods with an embarrassed grin and then pauses. Before you think his favourite pastime could be drinking Pepsi on the quiet, he adds with a wink: "I have Kinley sometimes."

There was good reason for the two to celebrate. Just that morning, the government gave them a clean chit over the controversial pesticides issue. In her statement in Parliament, health minister Sushma Swaraj said: "The results clearly show that all the 12 samples do not have pesticide residues of the high order as was alleged in the CSE report." She was referring to the tests conducted by government labs to check whether Indian soft drinks contained high quantities of pesticides, dozens of times higher than the EU norms as was alleged by the Centre for Science and Environment (CSE).

But the fine print in her statement read like this: "In some cases, they (pesticides residues) are well below the EU standards and in some a few times higher than the EU limit. It is also to be noted that the assertion of soft drink manufacturers that their product is within the EU limits has also not proved to be correct for 100 per cent of the samples." The Opposition accused the government of entering into a deal with the mncs and labelled the government 'certificate' dubious. Swaraj, on her part, said her statements were based entirely on the findings by the Central Food Technological Research Institute, Mysore, and the Central Food Laboratory, Calcutta. However, in the end, it was decided that a Joint Parliamentary Committee would investigate the entire issue.

Yet, it seems the worst is over for the cola makers. Confesses a relieved Gupta: "Until now, we thought the transport strike was our worst crisis ever." Both Bakshi and Gupta now want to work harder on rebuilding customer franchise, their brands and image. But there's still a lot to be done on the pesticide front. Although the government gave them a clean chit, it has decided to impose several restrictions on soft drinks makers. Here's a sample:


More than that, the issue has also brought to light some other problems. For instance, it's now clear that the cola companies are indiscriminately mining groundwater from semi-urban and rural areas to use in their products. And the current laws cannot prevent them from doing it. Finally, there's a heightened consumer awareness on the issue of food safety.

However, Sunita Narain, director, CSE, is deeply disappointed with the government response. "The health ministry tests have found pesticides in many of the samples which were tested, though in lower proportion. To give a clean chit to these companies is very unfortunate. Instead, the government should go in for more tests," she said at a press conference some hours after Swaraj's statement. She also accused cola makers of introducing new bottles into the market and urged the government to conduct further tests on the "older" samples.

But the CSE's contentions are becoming weaker by the day. In fact, through the week, several state governments like Kerala, Rajasthan and Maharashtra, which too had ordered independent tests, announced that the colas were perfectly safe. However, a CSE spokesman said that "details of these tests have not been made public, and it is not clear whether the samples were from the plants or the market".

The cola giants have clearly accepted the state governments' and the Centre's pronouncements as one that conclusively proves their products are safe. But doubts continue to lurk in the consumer's mind. Says Manubhai Shah, the formidable consumer activist from Ahmedabad: "The issue has got rather confused. Products made in India should not have been tested against EU norms. But the plus for the consumer is that the issue of standards have been brought into focus." He believes EU norms must be introduced, but staggered over a period of time, so that producers have time to upgrade.

Even though there seems to be a consensus on EU norms, Pepsi had strongly argued against them, calling them highly stringent ones which most Indian agricultural products would fail to clear. India currently follows the who guidelines. Says Chandra Bhushan, CSE's representative on the bis committee looking into the new set of guidelines for carbonated drinks: "But who merely indicates the minimum safety levels for a certain item, it has no standards for cola anywhere in the world." EU norms, too, apply only to the raw material for cola and not the finished product.

But the debate on norms is being drowned by the celebratory rattle of Pepsi and Coke bottles. Hear the cheer from Coke's Gupta: "We (the two cola giants) will always collaborate on common issues that face us and always compete as brands in the market."

Mantriji, Do You Watch FTV?