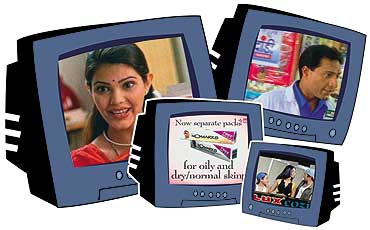 outlookindia.com
-0001-11-30T00:00:00+0553
A David-Goliath kind of battle is unfolding on TV channels these days, and no, the script for this one does not come from the Balaji stable. It's the return of the native, and a triumphant one at that. A bunch of deep-pocketed small names are currently in stiff competition with giant advertisers for prime time and the K-variety of entertainment. The channels aren't complaining, they've never had it better.

Sample this: Dandi salt, launched less than a year ago, has already spent close to Rs 30 crore on TV advertising. The four-drop wonder, Ujala, while giving MNC rivals sleepless nights, also has yearly ad budgets exceeding Rs 30 crore. "You can no longer call these brands small players. They are national players with huge ad spends," says Star India executive vice-president, sales and marketing, Raj Nayak. No wonder. According to ad circles, more than half of Dandi's advertising budget goes to the Star bouquet.

If Star is aggressively wooing these first-timers, Zee too sees great potential in homegrown brands. At present, 15-20 per cent of Zee's ad revenue comes from domestic or local brands, as opposed to MNC brands. Says Indranil Datta, general manager at media buying house, Zenith Media: "When large advertisers are cutting budgets, these clients are really a blessing in disguise for both the channels and the agencies." Taken into context, when the big daddy of fast moving goods, Hindustan Lever Ltd (HLL), cuts ad budgets even by 5-10 per cent, it means a loss of many crores in ad revenue. "When HLL decides to spend less, it has a trickle-down effect. Other MNCs which benchmark their ad spends on HLL, automatically cut budgets," says Praveen Kumar, MD of media tracking agency COFT(Current Opinion and Future Trends).

For most TV channels today, incremental growth is coming from smaller brands. "They consider such brands key clients and not just regional brands," says Jagdeep Kapoor of Samsika Consultancy. If TV channels have only in the past year or two woken up to the huge potential of these desi brands, the latter too have only now realised the value of advertising. Says Meenakshi Madhvani of media planners and buyers Carat India: "Typically, local brands start by advertising on niche channels. Once they taste blood, they make the transition to mainstream channels." Adds Kapoor: "The thinking of local brands is no longer small."

Many former suppliers and wholesalers have also now come up with their own brands. For example, Donear suitings, once a wholesale cloth supplier, is now a brand owner making expensive ad films that are shot abroad. In the last five to seven years, the number of local or regional brands hitting the market has shot up. "Five years ago, you only had Britannia bread, today you have Perfect and HarvestGold as well," says Kumar. "All these guys needed to advertise to gain visibility and momentum." And the regional and niche channels were the first to provide these first-timers with an affordable platform.

Figures bear out the rush. Till June this year, 8,700 new brands have been advertised. Out of these, almost 75 per cent account for new products and brand variants launched by small Indian companies. Add to this the new and unconventional categories of advertisers coming aboard on the box. Educational institutions, shops, cooperative banks and even fortune-tellers are going on air. While in the past smaller brands did use TV, "in the last one year there has been a substantial rise in their ad budgets together with more players joining in", says Nayak.

All the mainstream channels are getting a share of the desi products pie, but the main beneficiaries are locally uplinked channels like Aaj Tak. To advertise on a "foreign" channel—one that is uplinked from Singapore or Hong Kong—you need to get RBI permission since it involves foreign exchange remittance. Advertisers have to show that they have some export interests. Though this may involve some red tape, it doesn't deter the advertiser or the channels from wooing such business. The rules of the game are a bit different though. To begin with, many of the owner-driven companies like to deal directly with the channels. Typically, they get their creatives done via freelancers and then negotiate rates directly with the channels, which also helps them do their scheduling and release orders.

Often, these smaller players get in when the prices are down and stay off when the rates go up. As a result, they manage to get 20-25 per cent discount on market rates, and by going directly to the channel the 15 per cent agency commission also gets saved. "Many of these clients are first-generation entrepreneurs for whom every rupee saved is a rupee earned," says Madhvani.

While the MNC client spends a lot of time on analysis and adding up figures, the desi brand owner does not care for trps, going purely by gut-feel. "The way they buy and research media is completely different. The science of media planning goes out of the window. If the trade is watching a particular programme, they will put their money behind it," says a media planner.

Trust and relationship building are more important. "There's a lot of hand holding. I could sign a Rs 20-crore deal with them over lunch," says Nayak. This poses a problem for those in the media who have got used to working with MNC clients. "There is a cultural difference that's got to be sorted out. To win an account, for example, we might have to attend pujas at the client's house," says an advertising professional.

Meanwhile, the channels did suffer from a few initial hiccups while carrying the "low-quality" commercials of local players. "There were large sums of money being dished out. But an agarbatti ad from a smaller brand just did not fit in with the channel's image," explains Kumar. That was somehow sorted out. Most channels today have come up with their own justifications and arrangements, coupled with some qualitative improvement in the desi commercials. While almost anything goes on Aaj Tak, Star News cannot think of carrying an underwear ad but at the same time does not mind the 'tau' in the Dandi commercial coming in before the K-soaps on Star Plus. Finally, everyone learns to tango to the sound of money.