So where's that next drink coming from? Well, at home actually. Designer home bars are the new must-have status symbols. Wild West night, anyone? 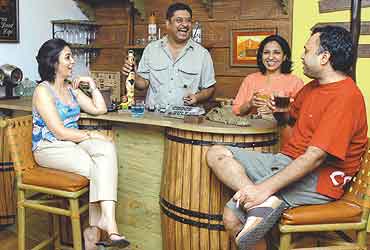 outlookindia.com
-0001-11-30T00:00:00+0553
Businessman Vikrant Nath takes great delight in two things in life, entertaining at home and Sergio Leone's spaghetti westerns. So, a couple of years back, while Nath was setting up house, he decided to toss his twin passions together into a brash little cocktail. And hence was born a bar with a Wild West theme that immediately became the preferred watering hole for friends. Not surprising, considering the all-wood 150 sq ft bar has saddle seats, horseshoe ashtrays, tequila glasses with cowboys smiling back at you and a Stetson hanging on the wall for that heady feeling. Enough ambience really to have you galloping into excess.

And Nath's not alone in his pursuit of Bacchanalian paradise. An increasing number of middle-class Indians are rediscovering the joys of drinking at home; and the bar is gradually becoming an intrinsic part of the decor in the urban pad. "A well-designed, well-equipped bar is the new status symbol...it serves more of an aspirational purpose than functional," says Delhi-based architect Bidur Bharadwaj who admits to a substantial increase in demand for designer home bars in the last five years. He points at the growing trend of creating a separate entertainment zone at home—with a bar, lounge, home theatre, books, magazines etc. What also helps is availability of services like bartending— which can be procured nowadays for as low as Rs 1,000 for a party. It seems there are just so many good reasons to have a bar and to party. 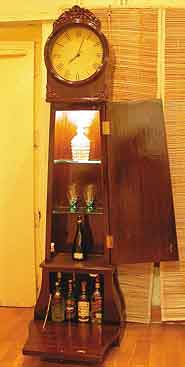 For Sanhita Bhowal, lecturer and mother of two, the ruse for having a bar was to pep up her social life as well as put an old radiogram to use. It helped that architect husband Nilanjan was more than eager to oblige. So now the the defunct music machine is the centrepiece in a functional yet thematic bar. "It had to have retro appeal," says Nilanjan as he opens a cabinet below the radio panel to show off his collection of goblets, champagne flutes, an assortment of liquors along with regular whiskeys and rums. Standing next to the kitchen, the bar is as understated as a peg of good scotch. "With two kids and a dog, I did not want a flashy, expensive bar that could be easily damaged," says Sanhita.

Home bars aren't entirely a new idea. Well-stocked and often ostentatious bars have long been synonymous with the elite, and people from the defence forces, who have had a tradition of entertaining at home. What is new though is professionals succumbing to the craze. Take Sairee Chahal Povaiah, who keeps back-breaking hours as an HR consultant with Heidrick and Struggles, but has his bar-cum-bookshelf always stocked. "Even when I was single, I didn't feel odd keeping a well-stocked bar," says Povaiah, well known in her circle for her collection of vodkas from around the world. 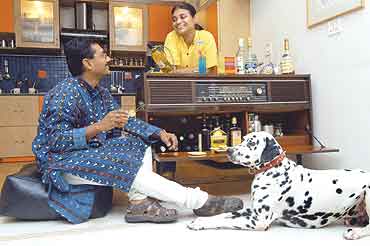 Even smaller cities have surrendered to the bar bug. One reason for that being larger spaces and cheaper prices. Anuradha Bore, a Bhopal-based housewife, had an interesting design in mind for a bar, but it cost Rs 40,000 in Mumbai. In Bhopal, she got it made for just Rs 17,000. Preeti Rajput, another city housewife, says her lavish wooden bar is put to frequent use. "Bhopal is a small city, and my women friends prefer not to drink outside. But if it's a party at home, then they just let their hair down," she says.

And since people are eager to jazz up their watering holes, the market too is milling with ideas. At Barcode—a bar studio based in Delhi—one can choose from an array of 20-odd designs. Wall-mounted bars, foldable trolley models, big ones with counters, there is something to match everyone's requirement and fancy. High-end furniture stores like fcml, Style Spa, Gautier also stock interesting designs. Even traditional furniture markets like Amar Colony in Delhi have started selling second-hand bars, sourced mainly from the embassies.

Pankaj Mehta, owner of Barcode, is in fact surprised by the discerning tastes of his clients, who incidentally include professionals like doctors and lawyers. "The younger lot in the 20-30 age group prefer a contemporary look with lots of straight lines, matte effect whereas the older lot go for the traditional woody look," says Mehta who has a self-designed Irish bar at home.

Those who have space even go for wet bars, with a washing/rinsing basin. A dry bar, in turn, is more apt for storage and mixing of drinks. Shahnaz Mahimtura, an interior designer in Mumbai, says the latest is the table bar: "It's a proper centre-table with in-built cabinets, shelves, storage that opens up into a bar." Nilanjan Bhowal has designed bars that have an aquarium, stained glass paintings in the background. The popular options for counters—stainless steel, granite, glass and even onyx. The fancier lot have started going for lights as an add-on. "People like to put up lights with colour-changing codes or go for glass-top counters lit from below," says Mahimtura. 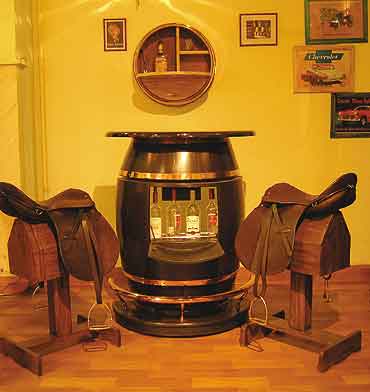 These pleasures, of course, come at a price. A readymade bar cabinet may cost anywhere between Rs 10,000-15,000. A bigger designer bar between Rs 40,000 to Rs 5 lakh. At places like Barcode, starting prices are Rs 3,500 for a wall-mounted bar. What costs more are the bar accessories. Bar stools, if bought from upmarket lifestyle stores, can cost you between Rs 1,500-25,000. Now, if all this seems a bit outlandish, you might want to lend an ear to Vikram Achanta, co-founder of Tulleeho.com, who suggests an economical way out—hire the services of a professional designer for the concept and your local carpenter for execution. It's true, there are no free highs in this world.

(With inputs from K.S. Shaini in Bhopal)