Slide Down An Oil Slick 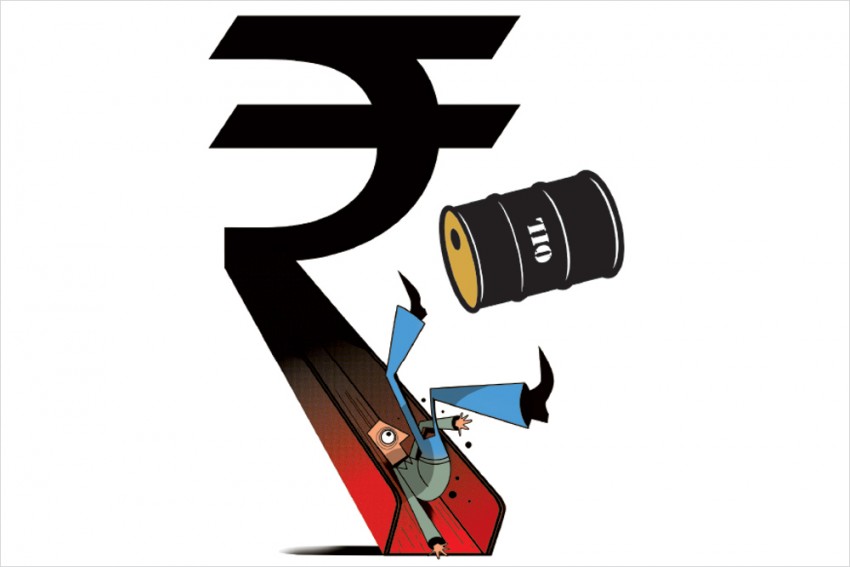 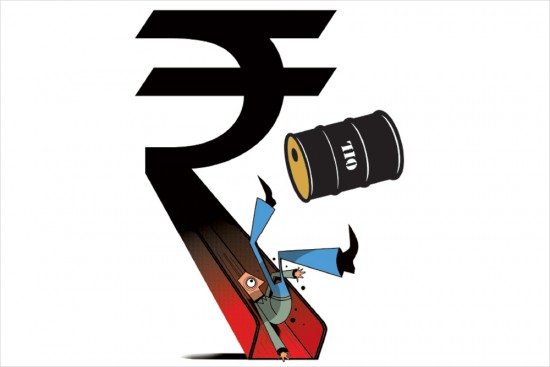 An unsteady rupee together with continuing volatility in crude oil prices in the wake of US sanctions against Iran and Russia have become a major cause of worry for India. The downward slide of the rupee over the last several weeks was triggered by the US Treasury Dep­artment’s move on April 16 when it put India—for the first time—on a list of countries being monitored for possible currency manipulation. In addition, US President Donald Trump’s protectionist moves have not helped India. The country is yet to work out how to minimise the impact on consumers as crude oil prices hover over $75 per barrel and the rupee sliding to more than 67 rup­ees to the dollar. For India, which dep­ends on imports for over 75 per cent of its crude oil dem­and, a weak rupee is a big drawback as it threatens to undo the last quarter’s ­robust economic growth. A major concern for policymakers is, will global oil prices scale over $80 per barrel in the near future, as witnessed recently ­before the slide to $75 levels?

READ ALSO: What A Nasty Tumble-Down!

With the Reserve Bank of India (RBI) stepping in, the rupee slide has been ste­mmed for now at below Rs 68/dollar. Despite this, the question—worrying imp-­orters in particular—is whether the rupee will fall further. “We look for a range of Rs 66.50–Rs 69.50 for the next three mon-ths, with a weakening bias for rupees. Fur-ther on, the rupee’s movement will depend a lot on the crude oil price,” says Vikram Mur­arka, chief currency strateg­IST, Kshitij Con­sultancy Services. He clarifies that contrary to popular perception, crude oil strength or weakness doesn’t translate to long-term rupee weakness or strength.

But in the short term,  crude strength can sometimes lead to rupee weakness. “Going forward, if Brent crude continues to rise, it can cause global inflation to rise. This can lead to an increase in bond yields, and as bonds become attractive, funds could be diverted away from global equities which could then fall. This could weaken the rupee further. The link between global equities and the rupee is through the BSE Sensex and the Nifty,” says Murarka.

With GDP having clocked 7.7 per cent growth in the January–March quarter, up from seven per cent in the previous quarter, the current situation seems likely to hit the manufacturing sector, which had just begun to recoup after demonetisation and GST introduction.  The unfolding scenario seems likely to reverse the inflation trend, which had moderated, as well as the modest rise in forex reserves. Shashanka Bhide, director, Madras Institute of Development Studies, points out that pressure on external fronts has been visible since the beginning of the current financial year. He says the rising import bill, caused by increasing global prices of energy and other commodities, would have an inflationary ­impact and hurt ­exports. “In other words, the output growth stimulus from the exc­hange rate depreciation may be missing. The off­setting factors for growth, in the face of these adverse external conditions, would be how to sustain investment, an indicator of future growth,” says Bhide.

Dharmakirti Joshi, chief economist at global analytical firm CRISIL, says that given high growth in the last quarter, India is in a better position to withstand the impact of a weak rupee. Past trends also give him optimism that the rupee’s fall will correct itself, and thus there will be little inflationary impact. “The direct imp­­act of rising crude prices is on the cur­rent account deficit, which starts rising very quickly. We have seen that hap­pen. The question is, at what level will crude oil stabilise? The volatility is due to geopolitical disturbances. If the average is around $70–72 per barrel, then its imp­act can be absorbed. But if it is $80 plus, then it can impact even the fiscal deficit to some extent,” says Joshi.

Goldman Sachs in a recent report raised the forecast of India’s current account deficit to around 2.4 per cent of GDP in 2018–19, from the earlier projection of 2.1 per cent. Pointing out that the trade deficit is alm­ost at the highest level now, Biswajit Dhar of the Centre for Economic Studies, JNU, states that any fur­ther depreciation of the rupee would int­e­n­s­ify the impact of the high oil prices on the economy, particularly import-dependent manufacturing units—and thus, exports. An international trade expert, Dhar cites the example of two major items in our export basket—petroleum and gems/jewellery—which have a significant element of re-exports. This means that when you import raw material, you pay more due to pressure on the rupee, and when you re-export, your rea­lisation will be lower, again due to rupee depreciation. “So, you are at the wrong end of the curve now. The trade deficit is rising because imports are expanding and we are unable to do anything about exports. The government doesn’t seem to have any strategy for promoting exports,” says Dhar. “Exports are linked to the state of the real sectors—how your manufacturing, agriculture and food processing shape up. We don’t know how manufacturing revival is shaping up because Make in India does not seem to have yielded much result,” he adds.

Last year, the government brought out a discussion paper on industrial policy, but there has been no movement on it so far. The real worry remains how the government proposes to put the manufacturing sector back on track. Simila-rly, the government is not focusing ­adequately on agriculture. Uday Bha­skar, director general, Pharmexcil, says the impact of the exc­hange rate over a short period may be hard to assess, bec­ause most raw materials or intermediaries imported are paid for partly in advance. “Our exp­orters normally keep 3–4 months of inventory, whereas our realisations are normally 90–120 days, which almost corresponds to inventory. While we pay ruling rates for our imp­orts, we realise predetermined rates, especially tenders, so when the rupee weakens for a longer period, we may find it difficult,” says Bhaskar.

With the world turning protectionist, exporters fear they will not benefit much from a weaker rupee. Suranjan Gupta, exe­­cutive director, Eng­­­i­n­e­ering Export Pro­­mot­ion Council India, cites eng­ineering exports, which last year registered 16–17 per cent growth over 2016–17 levels to reach $76.2 billion. These combine low value-added and import-intensive exports. A large portion of Indian engineering exports is in the low-value segments which will benefit from a weaker rupee, but imp­ort-intensive products will benefit less, as input costs will rise and they may not be able to pass this on.  “For an exporter, this yo-yoing of the rupee is a worrisome factor. The fall by four rupees in 15–20 days, which was then reversed, makes it difficult for exporters, particularly small ones, to even hedge,” says Gupta.

Both exporters and importers are banking on the RBI and the government to intervene to keep the rupee within the Rs 66–68 range. This is also expec­ted to keep a check on inflation due to higher petroleum prices. The rupee and oil price swing apart, the manufacturing and exporting community is rattled by the rise of protectionism, with the US having raised the duty on steel and ­aluminium. Now, with the EU also bringing in safeguard duty, the road ahead for trade will be bumpy.

In Hiding, But Quite ­Famously