Slave Revolt In Land Of The Free 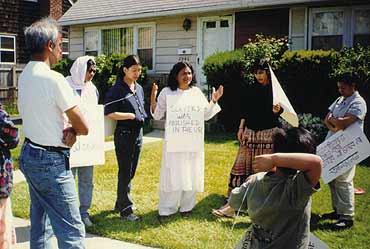 WHEN 63-year-old businessman Lakireddy Bali Reddy pleaded guilty last week in Berkeley, California, of smuggling Indian labourers into the US, his most prominent victim—Chanti Pratipatti, 17—wasn’t around to listen to his confession. Forced to work at Reddy’s restaurant and residence, and have sex with him, Chanti died in an accident caused by carbon monoxide fumes. The Californian businessman is expected to serve seven years in prison and pay $2 million in restitution to his victims and their families.

The Reddy case could well train the spotlight on the plight of domestic help whom rich Indians bring to the US, compel to work in deplorable conditions and pay wages far lower than the minimum $5.5 an hour(*). The exploitation continues behind closed doors and is extremely difficult to uncover.

Mrs Kaur, 56, though, is an unlikely legal victor, a rare exception to the rule of harassment that plagues many immigrant workers. But the $50,000 she collected in back pay from her ex-employers—a couple in New York—is a well-kept secret. As is the fact that she cooks and cleans houses for a living. For her children at least, their middle-class mother lives the genteel life of a nanny, looking after the children of extremely wealthy Indians.

For years, however, Mrs Kaur endured verbal abuse and 20 hours of work for a salary far below the minimum wage. Her workload included maintaining a three-storey mansion on Long Island, outside of New York City, washing and ironing laundry and cooking elaborate meals for a household ranging from 8 to 12 members. Although her monthly wages did increase marginally—from $300 to $350 over a three-year period—#she was unable to cope with her workload.

"Sometimes I couldn’t do it, because I’m old," says Kaur, in Hindi. "Then they would say ‘You’re doing nakhras." One day, in preparation for a party, she cleaned the house and prepared enough food for 25 guests. At 11 pm, she was told to make rotis. Kaur asked her employer to buy naans as she was suffering backpain. "At that point, the lady of the house went into my room, took out a suitcase, and told me ‘Get out, or I’m calling the police’," says Kaur. "Three years I worked here, then she picks up my bags and says get out."

It was then that Kaur decided to contact Shahbano Aliani, an organiser at Workers’ Awaaz. Along with Andolan, another workers’ rights group for South Asians, Workers’ Awaaz addresses the widespread exploitation of domestic employees and others in the New York area.

Kaur is just one of thousands of domestic workers who constitute an entire service sector that thrives on cheap, undocumented labourers. "To work for a wage here in New York city is one of the few options Asian immigrant women have," says Ai-Jen Poo, who helps direct the Women Workers Project.

In the New York area, with its above-average rate of working mothers, employees are often required to take care of very young children in addition to numerous household chores. Says Poo: "The rich depend on unpaid domestic workers. Without those workers they couldn’t do their own jobs."

Most Indians and Bangladeshis hire those from their own background, preferably someone unfamiliar with American norms. "There is the sense that people in the US are wise and cunning, that they can’t be trusted," says Aliani, originally from Pakistan. "What that means is that they’re not isolated. You can’t really hold them captive."

In contrast to factory workers—many of whom reap the benefits of organised labour—domestic workers here have no such privileges. They are instead left to pursue their rights individually, if at all, an anachronism that can be traced back to the days of legalised slavery.

"The National Labor Relations Act was passed mid-century to protect unionisation," says Sameer Ashar, an attorney who works with South Asian domestic workers. "They made a specific exception for domestic workers and farm workers. And part of that, I think, is a vestige of slavery in the US. The two occupations most common in the American South among African-Americans were domestic work and farm work. So there’s an inherited sense that these occupations belong to the private sphere."

Groups such as Andolan and Workers’ Awaaz have begun to educate domestic workers about their rights, but they do so without the full support of the law. "If the worker seeks to go to a meeting of Andolan, the employer could conceivably fire that worker," says Ashar. "The fact is that low-wage workers have very little power against their employers."

As one of the primary forces in the Andolan, Nahar Alam serves as activist, counsellor and peer for domestic workers in the New York area. On many weekends, her home in Queens acts as a meeting place for workers. On moving to the US from Bangladesh, Alam’s first job as a garment worker brought her just $35 in 15 days. She then responded to an ad for a babysitter. "One boy was 15 days old, the other was five years old, and they were sleeping with me in the same bed," she recalls. "I got $50 a week and had to do a lot. A lot of people buy perfume with more than that."

Last year, Alam helped take up the cause of Juneja, a Delhi native who was thrown out of her employer’s house late at night when she asked for more pay. With a Masters in Education, Juneja hardly fits the stereotype of the illiterate domestic. But having overstayed her tourist visa, her status was tenuous at best, allowing her employers to exploit the situation. She worked regularly from 5.30 am to 11 pm, earning $200 per week. Her case was taken up by Michael Wishnie, a professor of law at New York University. Juneja’s former employers, Rajeev and Vanita Kaul, finally agreed to pay her $24,000 in back wages.

In another highly publicised case last year, Bangladeshi worker Shamela Begum charged her employer Mohammed Saleh—the second secretary at the Bahraini Mission to the UN—and his wife Khatuna of indentured servitude. Shamela recounted how for nine months she was forced to work all days a week for $100 a month. To ensure she never left, her passport was taken on the first day of work. Finally, Shamela located a Bengali-speaking fruit vendor who helped her get in touch with Andolan.

Chaumtoli Huq, a lawyer with the Asian-American Legal Defence and Education Fund (aaldef) who represented Shamela, says the challenge for their argument lay in bypassing the diplomatic immunity covering Saleh. They argued that hiring a domestic worker was unrelated to consular duties and thus outside the ambit of diplomatic immunity. Their case was ultimately settled out of court for undisclosed damages.

And Shamela’s isn’t an isolated case. "This is a huge problem," says Jennifer Stanger of the Coalition to Abolish Slavery and Trafficking or cast. "Here you have the United Nations, an institution that’s supposed to be helping the world become a better place, and they have this institutionalised slavery programme."

Yet, in spite of the difficulties many South Asian women face in the US, they often prefer it to the situations they’ve left behind in their own country. Afroza Chowdhury, a Bangladeshi worker, has endured one abusive work situation after another, but lately has begun to draw strength from her peers at Andolan. Although her troubles are by no means over, she says, choosing her words carefully, "I love America because the laws work for women." Amen to that.

(*) Because of a typo, this figure erroneously appeared as $15.5 in the print version of the magazine. The error is regretted.

A Murder So Cold