The empire slaps back. Punjabis in the UK want old flame kabaddi at the Olympics. 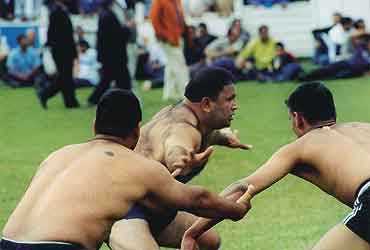 outlookindia.com
-0001-11-30T00:00:00+0553
Bhajan Singh Sohal has never forgiven Adolf Hitler. If it were not for that misguided Fuhrer, he might have been smiling on a game of kabaddi at an Olympic stadium, not the hockey centre at Westfield School, Chester Road, Bedford. Kabaddi at the Shaheedi Sports Festival here is fine, but the sport needs a bigger stage, and the world a better game.

Sohal has some time between conducting the weekend games to talk of a history that couldn't be. "It is sad that kabaddi is not in the Olympics. Hitler watched the game played by two teams from Punjab as a demonstration sport in the Berlin Olympic stadium. The game was unusually exciting, but sadly the stadium that Hitler demanded should be a fitting setting for the triumphs of the Aryan race was the last stop for kabaddi's Olympic aspirations."

Hitler betrayed kabaddi, India and the Aryan race. "After all, what did Hitler do for India?" Sohal asks. "Hitler's ambitions stopped at simply borrowing the swastika from India." When Hitler messed up the world, he messed up kabaddi along with it. The non-resident Punjabi is now trying to undo some of the damage he inflicted. England brought cricket to India, Indians have taken kabaddi to Britain. If only more people would take notice of that last bit.

The Punjabis haven't given up, since giving up is not a natural part of their thought process. Earlier this year, Nirmal Singh Sandhu, general-secretary of the England Kabaddi Federation, UK, presented a game of kabaddi before a senior member of the International Olympics Committee in New York. "They saw the game, we explained it to them, and they liked it," says Sandhu. Whether it will get to the Olympics is a story no one has seen the beginning of.

For the moment, the Shaan-e-Punjab is into the season's finals at Birmingham. The game is played as it has been for centuries, but with some differences. The raid into the other half is no more tied to a single breath with "kaudi, kaudi, kaudi" to prove it. It is now a 30-second raid, nice and international-standardish. A chap on a mike announces the teams with more excitement than clarity, and the raids begin.

The four defenders link arms, the raider touches one and runs. The one touched runs after the raider, to hold him in his half within those 30 seconds. Grappling, wrestling, pushing, shoving, and what are called scissor-kicks too seem fine. What seems less sporty is the slapping. The raider and the grappling defender seem to slap one another an extraordinary number of times within that fraction of 30 seconds that remains after the touch. Some diary of Hitler might reveal one day whether this put him off.

"It is not slapping like ordinary slapping," says Sandhu. "We call it open hand slapping. That is just part of the game. It is a tactical thing." The rationale is dubious, and some promoters in Canada want this rule reviewed. But it is a vivid part of the game, and the crowds love it. Well slapped is well tackled. The most serious fans are in the inner ring of spectators; they rush in £10 notes in hand to reward every successful raid or tackle.

"The money is good," says Daljit Singh Shergill, president of the Guru Nanak Sikh Gurudwara in Smethwick near Birmingham. This is the gurudwara that brought in kabaddi in 1962, and has since then done more to promote the game than any other gurudwara in the land. Most teams are still sponsored by gurudwaras. And most tournaments are still held in the name of Shaheed Udham Singh. The Smethwick gurudwara spent more than £20,000 on the kabaddi finals this year.

Some of the better players from India make up to £5,000 for the summer season, depending on the choice and the mood of a bunch of Punjabi businessmen in the Midlands. What's in it for the businessmen, you may well ask."Just balle-balle," says Shergill. "You know what our people are like, open-hearted, they like to say, look how good my player is." Balvinder Fidu the kabaddist has let friends know that a good part of his new kothi in Jalandhar comes from a few seasons in England.

The stamp of Jalandhar has endured. Shergill has been organising kabaddi in the UK since 1962, but his visiting card still mentions 'Village & P.O. Jamsher Khera, Jalandhar' along with 'Birch Street, Old Bury'. In a Britain that can still be an unfriendly white, kabaddi has been something of your own to turn to, with your own. Kabaddi is sport, but kabaddi is also memory, and it is defence.

Kabaddi just followed the immigration story. Britain's doors to free immigration were open until 1962 in those years when the Commonwealth still meant something. A good many mundas who left Jalandhar and Hoshiarpur until then had to be kabaddi players, and there were enough green fields ready for the game in summer.

"We had the first Shaheed Udham Singh tournament in Birmingham in 1962, and another in Coventry," says Sandhu, the official thinker in the world of kabaddi. The game peaked in the early '70s when there was a little less need to work and thus more time to play. In 1971, Wolverhampton imported the famous Sarban Singh Ramidi to show Southall, Coventry and Birmingham how kabaddi is played and trophies taken. The next year England toured India, even if the newspapers didn't say so.

Kabaddi declined in Britain because from the mid-'70s, immigration to Canada picked up. "It was easy to go there, and then you could get blood relations also," says Sandhu. "When families became pukka, lot of girls who went married boys from India and lot of them were kabaddi players." And so kabaddi went to Canada. And to California. "Because lot of landowners bought big farms in California, and kabaddi went wherever Punjabis went."

Back in Britain, kabaddi began to need players from India to keep up the standard. The trouble was the players who kept up the standard decided not to return. Some clubs began to sponsor visitors who were never players to begin with. Two years ago, the British high commission in Delhi declined all visas to supposed kabaddi players. Sandhu held four meetings with British officials at the high commission in Delhi and offered all sorts of guarantees to bring about 45 players from Punjab back to Britain this summer. Sandhu proved a winner because the players all returned to their half at the end of the season.

It's usual to offer anything uniquely Indian for the Guinness Book of World Records. Perhaps kabaddi is the only game where slapping is fair sport. The records did not end with the day's game in Birmingham. The boots of a couple of thousand cars opened up in the parking lots to reveal bars in waiting. So there's a record for the number of boot bars. And at 8,000 or so, this must be the largest sport gathering in Britain without a single woman in sight.