Slammer Dunk To A Poll Safari

Vijay Kumar Mishra: a textbook case of how a man can subvert prison for electioneering 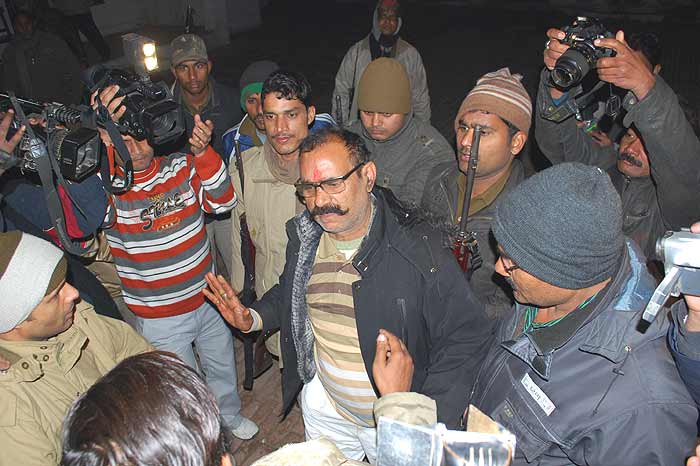 Consider the bizarre sequence of events: an electoral candidate goes missing along with his entire police escort while out on a court summons, and remains untraceable for over a day. And then, somewhat miraculously, shows up at his assigned jail, taking over 30 hours to cover a distance that should have taken no more than 12. What does he do all this while? The candidate allegedly supervises his election campaign in violation of government orders that prevent any form of campaigning by those behind bars.

But this inmate is no ordinary person. He is Vijay Kumar Mishra, a Samajwadi Party MLA, and his party’s candidate from Gyanpur in Sant Ravidas Nagar district, also known as Bhadohi, in the third phase of the Uttar Pradesh election on February 15. A candidate influential enough to bend rules, “indeed break the bars”, to suit his political goals. While inmates under trial are not barred from contesting elections, they have many restrictions placed on them, including a thorough ban on campaigning from jails and possession of any communication device that may allow them to do so. But with stakes piled up high in elections and a system corrupt enough to bend over backwards to indulge these regional lords, Mishra and others like him seek out every opportunity to supervise their campaign and ensure a win.

Arrested in February last year in Delhi and currently lodged in Meerut jail, Mishra’s is a textbook case of how democracy can come without the rule of law. For it matters little in the world’s largest democracy that Mishra faces, at last count, 25 criminal cases, including one of being the key conspirator behind a July 2010 blast in Allahabad that was intended to kill BSP minister Nand Gopal Nandi but one that ended up killing two others, including journalist Vijay Pratap Singh of The Indian Express. What matters most, though, is that he wields enormous money power. According to affidavits filed, he is one of the richest candidate to go to polls in the third phase with an annual income of over Rs 93 lakh and assets of over Rs 9 crore. He is also an influential Brahmin with a strong possibility of winning from Gyanpur that has a dominant Brahmin population.

To begin with, the jailed politician, out on a court summons in January this year, went missing along with the police personnel escorting him. Authorities in Meerut suspect that the police, under the influence of Mishra, allowed him to take a detour to his constituency and make necessary phone calls on the way. However, the personnel who were escorting the MLA, on being interrogated, simply replied that they had stopped on numerous locations to ensure a safer commute. Nobody knows precisely what transpired during these hours because even the mobile phones of the police staff were “unreachable” despite the fact that they were supposed to be travelling on a busy stretch from Allahabad, where he was supposed to be present at a court, back to Meerut.

When he finally returned to Meerut jail on the afternoon of January 18, a search revealed Rs 2,900 on him, along with a telephone diary and loose sheets of paper with 157 telephone numbers on them. Authorities suspect he had made calls to those numbers, more so because many of the numbers had been ticked. Jail authorities have requested the district magistrate in Bhadohi to investigate this breach. Mishra had left the jail on January 2 to be present at the adj 26 court in Allahabad for a hearing the day after and was scheduled to return on the 4th. However, the court issued a series of summons for the 7th, 11th, 13th, 16th and 17th, which forced him to stay in neighbouring jails in Naini and Rae Bareli for this period. On the 17th, the Allahabad DM ordered that he be taken to the district jail in Fatehpur. It is at this stage that he went missing.

Mishra is reportedly the richest candidate in the third phase of polls with an annual income of Rs 93 lakh and Rs 9 cr in assets.

These repeated and frequent summons around elections, especially when cases have been stymied for years, have made many political observers suspicious. “We all know there is little judicial accountability and the big goons know how to use the judges really well,” says Lenin Raghuvanshi, one of the coordinators of UP Election Watch and the executive director of the Benares-based People’s Vigilance Committee on Human Rights. He knows this only too well because a clerk once offered him, in the presence of a judge, the chance of scheduling a court hearing at a lower court for just Rs 10! However, Mishra’s supporters are quick to counter any allegations of favouritism from the courts. “If that were the case, why would he still be behind bars? Wouldn’t he be free?” asks Rakesh Mishra, a close associate of the jailed MLA and a SP worker. The MLA’s bail application has already been dismissed by a lower court and an appeal is pending in the Allahabad High Court. Mishra has also been unsuccessful so far in having himself moved from the Meerut jail to one closer to his constituency, such as the ones in Rae Bareli and Naini. While his lawyers have argued that the (undocumentable) commute from Meerut to courts elsewhere in UP poses a threat to his life, some suspect that he can better manipulate prison authorities there than those from Meerut.

Mishra’s wife Ramlali Mishra was also able to secure on January 21 an order from the adj 26 that asked the jail authorities to present him at the returning officer’s office and in the process allow him “another trip out” so that he can file his nomination papers. Strangely, another court (the ACJM in Bhadohi) on the same day asked that his nomination be filed through a representative, as permitted by Section 33 of the Indian People’s Representation Act. This is what Mishra was finally allowed to do, completing the paperwork on the jail premises in Meerut where his family members collected his documents. The same day, a few hours after filing his nomination, the jailed MLA fell “unconscious” and caused great worry to officials. However, when a doctor examined him, he found that Mishra was putting on an act to get out of prison.

Vijay Kumar Mishra, to be fair, does find himself under a stricter confinement because he belongs to the Samajwadi Party, the BSP’s principal opponent, and has allegedly tried to kill a minister of the Mayawati government. After he went missing, the state administration has so far managed to put off further excursions on court summons (six between Jan 19 and Feb 8) and by arguing it doesn’t have the necessary guards to despatch him safely. Rakesh, the MLA’s associate, thinks the government is playing unfair. “Why do you keep him so far away from Bhadohi if you do not have the guards to escort him each time he is asked to be presented in court?” he counters. “And how is that the administration has guards for all others but not the MLA?”

His capabilities limited without a phone, Mishra got the prison guards to work for him and make contact with his team.

His campaign capabilities limited without a phone, Mishra was influential enough to allegedly get a few prison guards to work for him and have them establish contacts with his team. This practice was exposed when Chandveer, his cellmate, ratted to the jail authorities. This was followed by an order dated December 24, where the Meerut police dig S.K. Panda asked for a stricter vigil on Mishra and punitive action against guards found to be working for him. Jail authorities Outlook spoke to say the EC must urge the courts to stop issuing summons for jailed candidates, especially during the campaign period. “Personal appearances ought to be banned. And if the courts really want to hear from them, their advocates can represent them,” said a UP prison superintendent, who wished to remain anonymous.

Meanwhile, in the MLA’s absence, Mishra’s family members and supporters have been campaigning on his behalf. “Sure, the personal touch is not there and we are like an army without a captain. This will surely impact the election result,” says the MLA’s associate Rakesh. “But we are still sure he is going to win by a margin of at least 50,000 votes.” Optimism will rule.