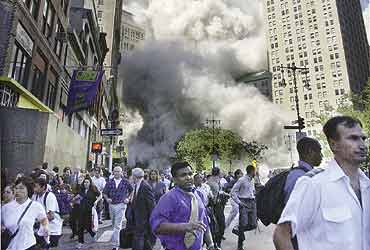 outlookindia.com
-0001-11-30T00:00:00+0553
Whether Flight 11's downing of the north tower will shift the geopolitical tectonic plates as much as the two pistol shots Gavrilo Princip fired point-blank

into Archduke Franz Ferdinand's heart on June 28, 1914, in Sarajevo is for future historians to decide. As top military men across the planet huddle in secret conference rooms, as thousands of families mourn their dead, as feral jubilation lights up the faces of those high on jehad, the world stumbles around picking up the pieces.

At 8:41 am, Rakesh Chandra, senior executive at investment bank Goldman Sachs, walked out of the subway station in the bowels of the wtc, just as he did every day. As he reached Broadway, a block from the wtc, he heard an explosion and turned around to see the top of the wtc north tower in smoke. "I hadn't seen the plane and it wasn't clear what had happened. What I could see was smoke billowing from the top of the building, and paper and debris falling from the sky. I ran for dear life and had to take shelter in some building on Wall Street when the cloud of smoke came down. There were cars racing to the site with sirens. We are now told that about 300 of the first firemen and 100 of the first policemen to reach the site perished."

Leslie Bixson of Sachs rival JP Morgan heard a rumble. "We all looked at each other, and said 'What's that?'. I was doing a video shoot for Etech, over at Chase Manhattan Plaza, and said 'It sounded like an earthquake.'. We all went to the window and I saw papers, millions of papers, flying, like snow in the sky. And then we saw smoke. I ran through, with some chefs, through a cafeteria. Past a dumb waiter, past an elevator, looked at the nearest exit sign, didn't panic. I went down 60 flights of stairs in 15 minutes. It was like World War III."

Exactly 18 minutes later came the second plane, United Airlines Flight 175, originally bound for Los Angeles but now a guided missile headed for the south wtc tower. The pilot came in low over the water, skimming over the heads of the buildings to the west of the wtc, banking slightly at the last moment before ramming into the south tower around the 65th floor. As the fireball bloomed, the building's steel girders gave in and one of 20th century's proudest architectural achievements collapsed onto itself in an exploding mushroom cloud of dust, debris and smoke. "It was horrible, the panic, seeing people jump out of windows like rain from a cloud. They looked like planks of wood, but with limbs," says Blixson. "I saw people coming out of the building," shudders Anne Freiberg. "I thought they were being pushed out by the force of the fire but then I realised they were making a conscious decision. Instead of burning to death, they chose to jump." And Freiberg was struck by a strange and perhaps meaningless epiphany: "I thought it was odd that it was mostly men jumping out."

When the second plane struck, the explosion shook the Goldman Sachs building about a mile from the Trade Center. "It was then that we realised that what was happening was real enough and we

knew that the first incident was not an accident. This was a terrorist attack and it was not happening in Kashmir or Israel," says Chandra. This was the biggest wonder of all, something no one had imagined in their wildest dreams. That this was happening in the US, in lower Manhattan, on Wall Street. This was happening to the Masters of the Universe on a beautiful cloudless September morning.

Within 19 minutes of the second strike, New York had shut down all its airports, and four minutes after that, at 9:31 am, President George W. Bush was on TV in Florida, calling the plane crashes "an apparent terrorist attack". But Bush still had no idea of the scale of the terrorists' ambition. For, as he spoke, American Airlines Flight 77 was just 10 minutes away from its target, the White House. At the last minute, the men in charge of the plane suddenly changed their mind. The Boeing 757 went into a fast 270-degree turn that carried it between the Lincoln Memorial and the Tomb of the Unknown Soldier, below radar level, hitting the limestone wall of the E-ring of the 29-acre Pentagon, the nerve-centre of US military might, slicing it open, and instantly killing at least 800 people. It was 9:41 am.

Twenty-nine minutes later, the last hijacked plane, Flight 93 of United Airlines, crashed southeast of Pittsburgh, apparently after the passengers fought with the hijackers. From its flight path, it seems likely that it was headed towards Washington DC, perhaps for the White House.

The four planes left behind a world stunned and scrambling to cope with the atrocity, yet avert a slide into a global conflagration.

Ailish Ryan was riding the subway when all trains were stopped in Manhattan. She decided to walk. "It was a lovely day. I came up, walked the length of City Hall park. I was behind Trinity Church and I looked up and saw fire. It looked like confetti coming out of the building. Everyone assumed it was an accident. But I didn't want to be late for work. And then there was a really big bang and a red flash. I ran towards Wall Street." At the Federal Reserve, she noticed white sheets of paper all over the ground. She picked up a sheet and saw that it had the name of wtc-based financial consultancy Marsh McLennan printed all over it. She still didn't figure out what had happened. "I got to my office. Everyone was going crazy. There were all sorts of crazy rumours. We started getting surrounded by smoke. We couldn't see the seaport anywhere. Three of us decided we wanted to get out. On the streets, men were tearing off shirt sleeves to use as masks."

As people covered from head to toe in white dust and ash staggered around on the streets that were fast filling with the screams of sobs of uncontrollable hysteria, rumours flew fast and thick. The confusion was compounded by the fact that most of the cellphones weren't working. Had the Pentagon been hit? Had the Capitol been blown up? Was the State Department being attacked? "People were worrying as you crossed the nyse Building," recalls Rudy Zubikowski, executive at the Commodities Exchange, New York Board of Trade. "Who knows what? Everyone was just going towards the water." Yet, what New Yorkers remember is that even in this climate of fear, people were overall orderly, courteous and polite. Says Chandra: "I think this is largely because we never realised the magnitude of the event as it was unfolding. " For most, it would be hours before the shock hit them full force, the realisation of what they had gone through, what they had witnessed.

From the ferry, Ryan looked back at Manhattan."It was a beautiful day and the sun was shining. It was so nice compared to what we'd left." But Ryan and millions of Americans will never ever leave September 11 behind.

Remains Of The Day