It's a series they badly want to cap their dream 15-Test run with. But Steve Waugh's buoyant Kang aroos face a hurdle in the slender but stern prince from Calcutta. 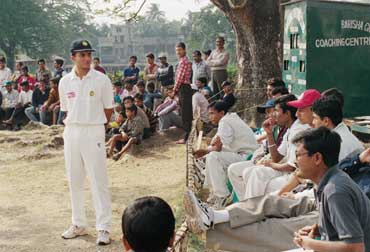 outlookindia.com
-0001-11-30T00:00:00+0553
Homecomings are no longer placid family affairs for Saurav Chandidas Ganguly these days. It's a balmy morning in Calcutta and the Indian cricket captain has taken time off—yet again—from a rare 90-day-long homecoming to play for his neighbourhood club team at a tiny, dusty orphanage cricket ground, a few hundred yards from his home in the chaotic Behala locality. For Barisha, one of the city's 36 first division cricket clubs, Ganguly's presence is a boon—the team has lost six of its nine previous matches and this is a crucial knockout game against the eponymous Dakshin Calcutta (South Calcutta) team. Ganguly didn't disappoint one bit: he turns up sharp at nine in the morning, gives out autographs to a few hundred star-struck locals who barge into the ground even as livid club officials holler from the sidelines, bowls his gentlest medium pace to pick up a wicket in nine overs and scores a rapid-fire 48 off 18 balls to help his team sail through by five wickets. "It's good to return to my roots. I last played for the club 12 years ago," he says. That was his first big match. He was 15 then and scored 38 runs batting at number six.

There is a happy conviviality about the game at the orphanage—budding cricketers belonging to both the teams and young neighbourhood boys and girls are scampering for his attention and autographs. Arpita Das, a little girl in a pink frock, jumps over a rope fence and lunges at Ganguly's feet. "I want to play cricket. I want to bat. Give me your blessings," she implores. He sends her back with an autograph. As Barisha loses the toss and Ganguly goes to field in the deep, itinerant lozenge seller Sudhir Ranjan Saha, a bedraggled friend in tow, fishes out a 50-paise coloured tablet and gives it to him. The friend shoots the moment on a battered instamatic for posterity. "Will you really get the picture?" asks Ganguly. "He likes me," says Saha. "He buys a lozenge every time he meets me. He's so relaxed even after all this fame."

It sure looks so, considering the odds stacked against the Indian captain. Barely a month away from the upcoming home series against Australia, a team riding on the crest of 15 on-a-trot Test wins, Ganguly is facing his acid test. The Aussies have the best pace attack in the world; a terrific troika of spinners led by the redoubtable Shane Warne (for whom India is still a challenge); and a captain—Steve Waugh—who has an intimidating record of leading his country to 16 wins from 21 Tests as captain, the best winning ratio of anyone who has led his country 15 times or more. The absence of Anil Kumble, nursing an injury, has already robbed the home team of its only strike spinner.

But sitting in the sparse drawing room of his sprawling 7,000-sq ft apartment in the ochre-coloured fortress-like home in a congested Behala bylane, Ganguly doesn't betray any tension. "It's important to do well against any team. Australia is no exception," he says, fiddling with his cell-phone. Then, in an afterthought, he adds a rider: "They've got an outstanding record in Test cricket that makes it (the series) more of a challenge." (See interview). And yes, he does agree that life will be tough without Kumble.

This is quintessential Ganguly. He reassures in quick, clipped tones that he's not stressed out and is enjoying his homecoming, chilling out—"eating and sleeping in rotation"—without any distractions. Now, look at the reality. After a gruelling season, he came home with a back problem—"a pain in the lower spine which I rested and treated for the first month at home".But he turned out for a Ranji Trophy tie against Orissa earlier this month, sending down 48 overs and taking nine wickets with the back pain and picking up 39 runs in the second innings. (Bengal lost.) Then he turned out twice for Barisha at the orphanage ground—some 10,000 locals crowded the ground during the first match—to help the team through the knockout round.

There's also a function or felicitation every other day in a city which deifies its only icon—a two-hour session at the Indian Institute of Management (iim) where he holds forth on motivation and handling stress to an enthralled throng of post-graduate students one day, a felicitation by local journalists the next. Then there are fan clubs sprouting all over the city and a housing estate named after him. That's not all. He's spent five days travelling around the country shooting ad-films for his sponsors. Now he's packing his bags to judge a beauty contest out of town. His cell-phone voice-mail is overflowing, the home telephone rings all the time. Life at home isn't exactly tranquil either. The Ganguly joint-family home is maze of flats where 50 people reside—his father and four uncles live with their families—and the Indian captain, fondly called 'Maharaj' by his family and friends, has 14 'fan' cousins to contend with. The foyer is jammed with two dozen cars, a retinue of servants rush about the place and family members leave and arrive every other moment. But ask the usually deadpan-faced Ganguly about this and he quips: "My life isn't really packed."

So is the Indian captain the king of cool or a fiercely motivated control freak, keeping up an unflappable exterior to a restless and rebellious within? A bit of both possibly. An early coach and mentor Moloy Banerjee remembers that Ganguly was "demoralised" after his jinxed 1991 debut tour to Australia where the 19-year-old cricketer played one game—against the West Indies—in four months and scored four runs. (He returned to Test cricket after relapsing into oblivion for four years.) "Critics carped he didn't like being the 12th man— he hogged all day and didn't work hard enough at his game. That hurt him. He used to be depressed." Ask Ganguly about it and he says quietly: "I was sure of my comeback. Age was on my side." Calcutta-based sports-writer and biographer, Sabyasachi Sarkar, says he was "on the verge of tears" when India went down to New Zealand after beating Australia and South Africa in the icc Cup in Nairobi last year. Ganguly had slammed a century in vain. "This is my worst defeat," he told friends. "How often do such opportunities come?"

It also hurt when a section of the British media ran a near-hate campaign against him last year when he turned out for Lancashire: that he was aloof and travelled alone ("All professionals in county cricket have their own cars and are supposed to travel in them. They take the team bus when they are travelling for more than three-and-half hours which I did"); didn't mix with his teammates ("I just never used to go out much at nights. Playing six days a week, from nine in the morning to seven in the evening, is exhausting. But my relationship with the boys was outstanding"); and most infamously, turned out in blue shoes for a county match ("It was a day-night game against Gloucestershire. I scored 100 off 70 balls with those blue shoes on. None of the umpires warned me.") Then there's a hint of Ganguly's understated braggadocio: "As long as the club is happy with what I do, I don't bother."

There's a quiet rebellious streak within Ganguly, a derring-do matched only by his aggression on field. On the one hand, there is the homebound conformist, who freely confesses to a "conservative upbringing", and growing up on a 7-pm curfew with a disciplined regime of studies and sports—the rare star cricketer who usually doesn't stay up late, shuns nightlife and hates discos as he doesn't "like the loud sound and there's too much smoke". But there is also the maverick Ganguly who four years ago went on to marry Dona, his next-door childhood sweetheart and danseuse, against stiff opposition from both the families. Banerjee quietly called in a neighbourhood registrar at his home, the couple arrived in separate cars and signed the papers. Ganguly then flew out of Calcutta for a coaching camp. His parents came to know of the news from the newspapers a good week later. Expecting the wrath of his parents, he even bought an apartment in the neighbourhood in the event of his leaving home—it has now been turned into his wife's dancing school. Ask him if he's a headstrong man, the real Ganguly stands up: "When you are in love, these things happen. What's wrong with it? There are many instances where people have married against their parents' will." Then there is his characteristic moderation with a homegrown bon mot: "I don't think any parent can accept a love marriage willingly. Can they?"

This curious combination of conservatism and derring-do possibly helps make Ganguly a mature cricketer and a gritty, outspoken captain. To be sure, he was always a gifted sportsman: a top-notch footballer—"I played in all positions except as the goalkeeper"—in school, captaining the St Xaviers side and picking up the best player award. Then, lazing at home one winter holiday before going to college, he picked up a cricket bat and went out to play at the orphanage ground. The rest's history. "I am not scared of the high expectations," he says. "Nothing is permanent."

But Ganguly does get scared once in a while. During an early morning break-in of his hotel room he was sharing with former Test opener Arun Lal during a Deodhar Trophy match in Bangalore years ago, he stood behind the television, requesting the sword-wielding burglar to take everything. After the burglar finished with his watch and a wallet containing Rs 500, Ganguly gently reminded him: "You have forgotten my suitcase. There's a bit of money there as well." Four years ago, on a frosty night in Middlesex, Ganguly was spooked by a late-night ghost story-telling session so much that he instructed everybody to curl up in the common drawing room instead of retiring to their bedrooms. "He really got scared that night," remembers his childhood friend and cricketer Jaydeep Mukherjee.

But, as Lal says, the "boy in Ganguly has really grown up fast and he is now one of the toughest guys around." Next month, when the going gets tough against Australia on cricket fields around the country, the nation will expect Ganguly to get going.