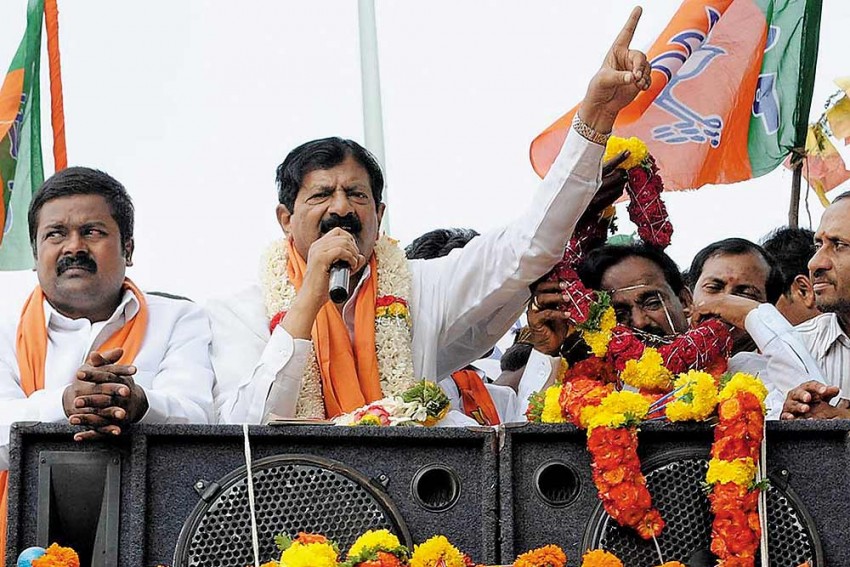 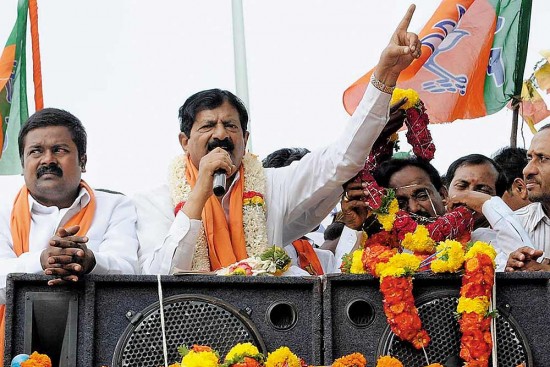 In the clogged streets of Chikkaballapura on April 6, the BJP roadshow crawls on, then stops near the market. The BJP’s star campaigners—chosen on the basis of the caste demographics of Chikkaballapura constituency—ride a campaign truck, exhorting, appealing and pointing out the BJP’s efforts towards the common weal. They unfailingly castigate the two outsiders in the fray—Union minister Veerappa Moily and former CM H.D. Kumaraswamy. Former minister B.N. Bacchegowda, the BJP nominee, is hailed as the ‘local’ candidate, with consummate knowledge of the area’s problems and needs. Former deputy CM R. Ashoka puts it rhetorically, asking if voters want “a tou­ring talkies or a permanent movie theatre”.

Bacchegowda invites Venugopal, lea­der of the Balija community—present in large numbers in the area—to speak. Venugopal begins with an invocation from the Bhagavadgita. He likens Modi to Krishna, come to liberate mankind from adharma, and Bacchegowda to Arjuna. BJP activists, fed a farrago of pedestrian, partisan offerings, are jolted awake from their torpor. Modi’s scheduled visit to Chikkaballapura on April 13, just before campaigning ends in Kar­nataka, is announced to great cheers.  Ven­ugopal tells fellow Balijas how former CM B.S. Yediyurappa brought the community back from the 3A reservation category to the 2A category, which offers more opportunities.

Like elsewhere in India, in Karnataka too the Congress has had to fight disaffection for being perceived as corrupt. Even in a state where its last stint in power was besmirched with mammoth corruption scandals, the BJP is banking on the twin pulls of Modi and disgust at ‘10 years of UPA misrule’ to bounce back.

In Karnataka, the Modi effect is vital to restoring confidence to a fractious BJP, as well as enticing prospective voters, who haven’t quite forgotten the corruption charges against BJP leaders. This is crucial, now that Yediyurappa and B.S. Sriramulu are back in the BJP, and contesting from Shimoga and Bellary. The ritual invocation of Modi is to reassure all that the BJP is on the right track.

However, despite repeated visits to Karnataka in 2014, there is no great Modi wave yet, though he has pulled larger crowds and has had a greater impact than Rahul Gan­dhi, who also has held several rallies and road shows. Riding on a heady pre-poll upsurge, the BJP is determined to sew up Karnataka—its cobbling together of a social coalition of Lingayats, Dalits  and OBC groups such as Nayaks and Balijas is being considered astute politics. Add to this the traditional upper-caste urban voter, and BJP has a remix of its old winning formula. The momentum, especially in central and north Karnataka, is with the BJP.

Seven months ago, when the Congress won two parliamentary byelections, CM Siddaramaiah perhaps didn’t expect thi­ngs to be so gloomy so soon. Karnataka seemed to be a Congress mainstay; leaders spoke of winning as many as 20-22 Lok Sabha seats out of 28. Unlike the chaos in the last days of the BJP, Siddaramaiah’s 11-month-old government has functioned smoothly till now, despite demands from senior Congress MLAs for cabinet positions. Siddaramaiah always had an eye out for the Lok Sabha polls—hence a series of populist measures like providing cheap rice to the poor. But without any bold developmental mea­sure, there is a distinct sense that his tenure is a tepid one; that his competent, clean administration may not be enough to counter a rejuvenated BJP.

As usual, the JD(S) continues its plucky fight both for its political base and relevance. Former PM H.D. Deve Gowda is expected to win. However, through clever candidate selection, JD(S) has set up two of the most watched contests in Karnataka. H.D. Kumaraswamy himself is in the fray in Chikkaballapura, and Geetha Shivr­ajkumar, wife of filmstar Shivrajkumar and daughter of former CM Sarekoppa Bangarappa, is challenging Yediyu­rappa in Shimoga. The other showdown is in prosperous Bangalore South, where Congress’s Nandan Nile­kani has thrown a challenge to BJP general secretary Ananth Kumar.

Under The Fruit Tree