A pall of doubt hung over their buying. Now mull over the selling of the coffins, meant for Kargil martyrs. 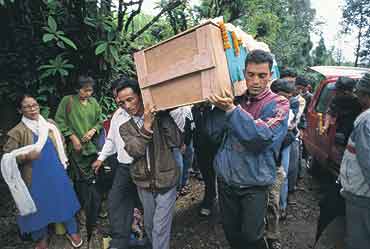 outlookindia.com
-0001-11-30T00:00:00+0553
Two years after the infamous 'coffin scam' broke—with the Comptroller and Auditor General indicting the defence ministry for hastening into a bad bargain for aluminium caskets and body bags—the government is now desperately looking for buyers for this detritus from the Kargil war. The army says it cannot use the heavy caskets and has categorised these as junk—costly junk, coming for $3,75,000 for 150 pieces (after deducting 10 per cent warranty, that makes Rs 1.47 crore). Though the government wants to sell these—and alongside them, for good measure, 900 body bags that cost $76,500 (Rs 34.42 lakh)—ministry officials say they cannot find buyers.

Unofficially, Indian defence dealers—who liaise with the defence ministry on a day-to-day basis—have been asked to sound out counterparts in East Europe who are frequent buyers of caskets. But given the inflated price, there are no takers. One buyer in Romania, for instance, who was interested, backed out when he heard the cost, saying it was way above the going price.

The ball for selling the coffins was set rolling by none other than Union defence minister George Fernandes. In a personal letter addressed to all MPs, he admitted the coffins were useless and urgently needed buyers. "The 150 caskets we had bought will lie unused unless you thoughtfully consider what to do with them and raise the matter publicly as you think fit, so that we may dispose of the caskets and gain value," Fernandes' letter said.

The defence minister, in fact, indicated the caskets may fetch a profit. "We bought them for 2,500 US dollars each but the (then) US ambassador in India and the (then) Indian ambassador to the US both state in writing that the current price of exactly the same reusable aluminum caskets we have imported is 2,768 US dollars each." This letter was written in January 2002. Till now, despite the defence ministry's best efforts, the unusually heavy caskets have found no takers.

The original plan was to return the caskets and the body bags to the US firm which had supplied it and demand a refund. But the supplier refused. When contacted by Outlook, a spokesman for Buitron and Baiza in Texas, which supplied the caskets, said his company rules did not permit any second thoughts on any deal. "It is not our company policy to repay after the consignment has been delivered. The Indian government probably had its own reasons for scrapping purchase of more caskets and body bags, but we have nothing to do with it. We cannot talk more," he said.

Instead, Buitron and Baiza spokesman cited the fine print in the contract-purchase order, which is quite categorical: "All expenses connected with the establishment of (the) letter of credit (LC) shall be paid by the buyer, and outside India, by the seller. Where the extension of the validity of the LC is required, the expenses for such extension shall be borne by the party responsible for causing the requirement of such extension." As per the contract, 90 per cent of the full value of each consignment has already been effected against the following documents: airway bill, commercial invoice, packing list, certificate of origin and an inspection acceptance certificate. In other words, the money is now gone for good.

According to a highly-placed source in the defence ministry, several gaps in the purchase of caskets have made it a difficult proposition to sell them.But while the whole scrutiny has been on the purchase and pricing of the aluminium caskets, there is no mention of the body bags—the other component—that accompanied them. And thereby hangs a rather sordid tale that has not yet come to light, not even in the CAG report. It shows how corruption plays a role even in the purchase of polythene bags to bring home soldiers who have died in battle. According to documents available with Outlook, the price was inflated from Rs 11.55 lakh to Rs 34.42 lakh.

When the master general of ordnance in the army first drew up estimates for the purchase of 150 caskets and 900 body bags before Kargil, the cost of a casket was fixed at $2,500 and body bags at $27.50 per piece. Stated the military order: "As per information received from our military attache at Washington, the cost of one casket supplied by the US firm is 2,500 US dollars and the cost of body bags is 27.50 US dollars...." By the time the contract purchase order was signed with the sole US company, M/s Buitron and Baiza, on August 2, 1999, the price of the caskets remained the same but the body bags jumped from 27.50 US dollars to 85 dollars per piece.

Finally, the body bags were bought at the rate of $85 instead of $27.50. No one in the defence ministry or George Fernandes' office is willing to explain this scandalous, threefold jump in prices. "This is a government that won an election on Kargil. Now it seems that money was actually made on the 'coffins', notwithstanding the high emotional pitch that the NDA government had adopted at the time of the last general elections. Who took the money and how the defence ministry's decision was overturned needs serious examination. That has not been conducted so far," says Congress MP and lawyer R.K. Anand.

The defence ministry and George Fernandes' office refuse to comment. "We have no information and we will not speak about it. It is a sensitive issue," was the stock reply. Perhaps they have a reason not to talk about a potentially sticky issue with the general elections a few weeks away. Ultimately when the caskets and its accompaniments reached India, they were all rejected by the army "on grounds of being overweight and welded rather than dye-pressed". Despite the defence ministry's assertion that "there has been no loss to the exchequer and the amount of money is being recovered", nothing of the sort has happened.

Interestingly, George Fernandes has washed his hands of the entire deal. In a statement to Parliament around the time the scam broke, he said: "I was nowhere in the picture when the army went through the process of acquiring the caskets. The purchase was cleared at the level of the defence secretary. I learnt about the transaction only when the matter was raised in Parliament after the CAG report was submitted." If this is correct, the key question then is: was any action taken against those officials involved in the transaction?

Meanwhile, the coffins have been dumped in a ministry safehouse out of public view. Considering that their import was an emergency requisition in Kargil, even though it was an old proposal, several questions remain unanswered. And to think that this deal is but a drop in the ocean of defence purchases.

On The Chopping Block