Sir, Where To Get Off The Bus?

BJP’s original yatri L.K. Advani has launched as many as five yatras. A look at the forays of the BJP’s iron man 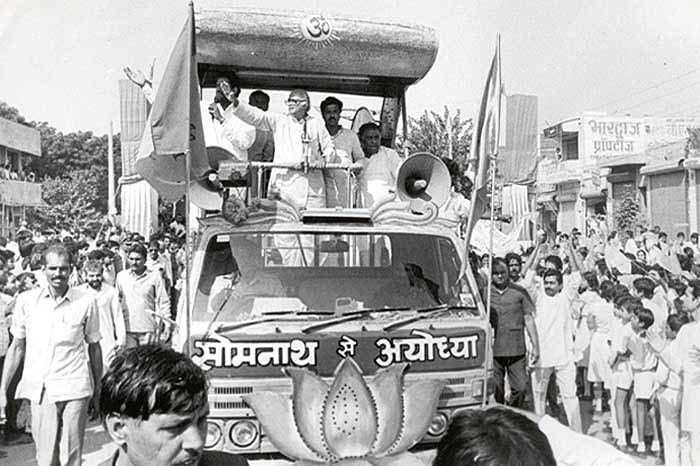 In a political career spanning over six decades, BJP’s original yatri L.K. Advani has launched as many as five yatras. His portal describes a yatra as a “procession, a journey, a pilgrimage....” Here is a look at the forays of the BJP’s iron man:

The first yatra, centred around the Ayodhya controversy. Advani got on a Toyota pick-up truck dressed to look like a chariot, set out from Somnath on September 25, 1990, and traversed across India, setting off a tremendous public response and lots of communal tension in its wake. The journey was supposed to culminate at Ayodhya on October 30, after covering a distance of 10,000 km, but was stopped abruptly at Samastipur when Laloo Yadav, then Bihar CM, ordered Advani’s arrest. A sort of variant-on-wheels of famous post-independence padayatras—like the early ones by Acharya Vinoba Bhave or Chandra Shekhar’s ’80s version—it was Advani’s only hit roadshow, the success of which he kept trying to recreate, with diminishing returns.

Buoyed by the success of his Ram rath yatra, Advani set out on another one three years down the line. Aimed at mobilising public opinion over two bills—the Constitution 80th Amendment Bill and the Representation of People (Amendment) Bill—it was planned as a four-pronged yatra, to be led by senior leaders of the party from different corners of the country. All it elicited was a lukewarm response.

Undertaken in May-July 1997, this was described as a patriotic pilgrimage to commemorate the Golden Jubilee of India’s Independence. As such, it would travel to places associated with the struggles and sacrifices of the heroes of the freedom movement. Unfolding in four continuous phases, it was a failure.

This was clearly an election-oriented road show held in the run-up to the 14th Lok Sabha polls. Lasting 33 days in two stages, it failed to resuscitate the nda’s fortunes in the 2004 elections.

Rajnath Singh and Advani embarked on this trip to promote the idea of safeguarding national security and national unity. Covering 17 states, the yatra was such a failure that most BJP leaders don’t even want to remember it.

After the debacle in the general elections, Advani wanted to set off on a nationwide yatra. But the RSS aborted the plan in the backdrop of mounting differences between the party and the Sangh.