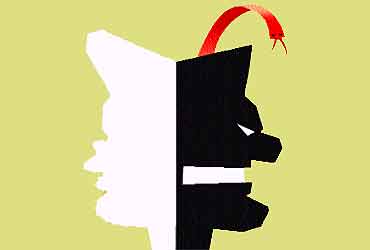 outlookindia.com
-0001-11-30T00:00:00+0553
Ever since he came to power, Dr Manmohan Singh has made it abundantly clear that he regards the prime ministership not as an entitlement, much less a spoil of electoral war, but as a unique opportunity to serve the nation. Far from conferring rights upon him, it has imposed a huge burden of obligation. The first inkling we had of this profound change of approach to governance came in the Common Minimum Programme. Whatever it may have lacked in consistency, the CMP made it clear that economic development could not take place at the expense of the poor. The foremost task before the government was to make the poor partners in progress and ensure that the weakest of them was not crushed under its wheels. In his budget speech, P. Chidambaram explained how the government hoped to do this without discouraging growth, in spite of having to operate within the straitjacket of a minority government backed by an ad hoc alliance.

In his Independence Day address to the nation, Dr Singh sought to take the people of India a few more steps down the path that he is seeking to blaze. Even among the many stirring addresses delivered by his predecessors, his address stood out because instead of telling the people what the government would do for them, he asked them what they were prepared to do for their country. Reminding them of what Pandit Jawaharlal Nehru said 56 years ago—"All of us talk of India and all of us demand many things from India. What do we give her in return?"—he told them that building the India of our dreams was not the job of government but of the people themselves: "Our nation is what we are. It will become what we make of ourselves."

Even more significant was his candid admission, made perhaps for the first time since Rajiv Gandhi's Congress centenary speech in Mumbai in 1985, that the political system and the bureaucracy had evolved over the decades into the main obstacles to growth and equity in India. And, by implication, that it was the criminalisation of the first and corruption and lack of accountability of the second that had kept the poor in chains. "The real challenge for me and for the government at all levels is the challenge of implementation of our stated policies and programmes.... We have to make officials accountable.... Citizens increasingly demand governments that are accountable to them. They have a concern both for probity and efficiency in public affairs. The time has come for us to consensually evolve a code of conduct for all political parties, a code of ethics for all individuals in public life, and a code of best practices for the government at all levels".

In 1985 Rajiv Gandhi had stated candidly in Mumbai that only 15 paise out of every rupee of funds allocated to rural development reached the intended beneficiaries. Some recent estimates in the Planning Commission suggest that the figure may have dropped even lower. Dr Manmohan Singh is therefore fully aware that the success of his human approach to development will not depend upon the sums that his government will allocate to the food for work, employment guarantee and rural infrastructure schemes that he intends to start but upon the efficiency and honesty with which existing allocations were spent. This is what he has promised to improve.

The task he has set himself is simply not achievable without a root-and-branch reform of the Indian political system and the bureaucracy. Politics has not become corrupt and criminalised because politicians are venal or criminal, but because since the ban on company donations enacted in 1970 and central and state assembly elections were separated in 1971, there has been no honest way, either for an individual or a political party, to raise the money needed to fight elections and keep the party machine working.Criminals have stepped in to fill the breach.

By the same token the bureaucracy has ceased to be accountable partly because officials have found it expedient to fall in line with the wishes of their political masters, but mainly because of the almost infinite protection that Articles 310 and 311 of the Constitution give them from dismissal. Today there is no law under which a civil servant can be held accountable for simply not performing his duties. He can only be dismissed for having committed a crime, and even there, permission has to be obtained from the Governor before he can be prosecuted. This is almost never granted. As a result, officials can sit on files forever with impunity, and agree to process them only after receiving a handsome 'commission.' They can select their contractors on the basis of the kickback offered, and gerrymander the contracts to ensure that its penalty clauses become worthless in a court of law.

The combination of an unaccountable officialdom and a corrupt political system has given birth to rings of extortion that have made life a misery for anyone who has to deal with the government. These extend to the bureaucracy itself. Today policemen, income tax and customs and excise officials pay their higher-ups for promotions, and for transfers to 'lucrative' posts where they are expected to recoup their initial 'investment' many times over.

This is the perverted, but deeply embedded and immensely powerful state structure that Dr Manmohan Singh has set out to reform. One cannot but wish him success.