A sliver of hope of having a go at the new government surprises many. First of all, the Congress. Updates 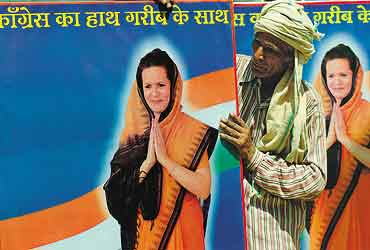 outlookindia.com
-0001-11-30T00:00:00+0553
As the political establishment moves into top gear for the last two rounds of polling in Lok Sabha 2004, the Congress is in a far better frame of mind than it was in the first half of the electoral exercise. Buoyed by mid-poll assessments which show the NDA falling short of a majority, it sees two post-electoral possibilities: the best-case scenario of a Congress-led government, or the more likely one of a seriously weakened NDA government whose lifespan is coterminous with Atal Behari Vajpayee's prime ministership. Either way, the party thinks the distance between the NDA and the Congress-led alliance is closing. At the AICC headquarters on 24 Akbar Road, feelgood is palpable: cadres are fired up, hitherto somnolent geriatric leaders want a hand in campaigning, a shadow cabinet is being hotly debated and a tally of 250-plus for the Congress alliance is touted as achievable. With a sense of urgency and optimism, the Congress is preparing for a final thrust on May 5 and 10.

"The optimism derives from our own internal assessment of the first two phases of the elections," says Congress spokesman Jaipal Reddy. But off the record, Congress leaders acknowledge that the ndtv poll and other feedback from the field giving the Congress-led alliance a projected 200-plus seats is responsible for its soaring spirits. As an AICC functionary puts it, "The exit polls have electrified the cadre." Adds CWC member Prithviraj Chauhan, "Morale is high and the mood upbeat. The feeling is that we are very much in the race."

The party's spin doctors make it sound dead easy: the Congress will wind up within striking distance of forming a government; the Left Front and Samajwadi Party will rush to extend support to Congress president Sonia Gandhi (well, if not the SP, the bsp then, or perhaps both); a demoralised NDA will retire hurt. If the Left is pitching for a Third Front government as the preferred option, why, that's only posturing for the benefit of voters in West Bengal, Kerala and Tripura. If Rashtriya Janata Dal (RJD) chief Laloo Yadav vetoes any truck with the SP, that's only because he doesn't want Mulayam as PM. If ncp chief Sharad Pawar sports a foreign origin chip on his shoulder, that's only until the elections ("Don't quote me but before going abroad for rest and recuperation, he said he had no problem working under Sonia," claimed a senior ncp leader).

But away from the media glare, in the two principal war rooms of the Congress at Lodi Estate and South Avenue, its strategy committee is taking a rather more sober view of its prospects in Lok Sabha 2004. Reddy may well insist that the Congress on its own will cross 180 seats (and the alliance will touch 253) but the backroom boys tout a more realistic figure of 135 to 145. Here, no one puts much faith in the line the party has been selling its own workers: that the Congress alliance will form a government with the Left Front.

Congress strategists do not subscribe to the BJP's internal assessment of 180-189 seats for itself and 270-285 for the NDA. They believe the NDA will fall short of a simple majority, but could be in a better position to form a government than the Congress alliance. Also, there's a grim realisation that the second phase was the best for the Congress, thanks to an anti-incumbency wave in Andhra Pradesh. It is upbeat but cautious about Tamil Nadu as the state has consistently defied pollsters.

"This is not a do-or-die election," explain the pragmatists. "We're looking at two to five years from now". Had it been an all or nothing effort, they point out, the party would have insisted on unleashing Priyanka across the entire country. Instead, she has been confined to Amethi and Rae Bareli, barely touching four other seats in UP, during the first two phases of polling. "There's no point in encashing the family charisma when victory is far from assured," says an AICC functionary.

The backroomers admit that the prospect of forming a government is dependent on far too many variables. If the Congress alliance can breach the 200 mark, if the SP were to get a respectable tally, if Laloo and Mulayam were to sort out their differences, if a Third Front-Left Front combine were to prove unviable, if a consensus candidate for PM were to be found, if all the Congress allies stuck with it, if the NDA's superior resources and political management fail—if all of this fortuitously falls into place, then the Congress could wind up leading the government.

It is a long shot. But for the first time, the Congress looks like it is "in the fight". The idea is to make it difficult for the NDA to form a government. Or at least, to form a stable government which would go the entire five-year distance. "Either way, whoever forms the government, I think we are looking at mid-term polls in two to three years," says a CWC member.

A reasoning that has already sent the Sensex nosediving and paradoxically, says Star TV pollster Yashwant Deshmukh, "it could work to the NDA's advantage by polarising votes in its favour". The undecided or lackadaisical voter, frightened by the prospect of instability, will now make the effort of going to the polling booth. Predictably, Vajpayee is aggressively playing the stability card. "Which is more likely to be stable—an opportunistic alliance based on power-sharing or a Congress-led coalition with solid ideological moorings?" asks Congress MP Anand Sharma. Adds spokesperson Abhishek Singhvi, "The National Dissipating Alliance can hardly talk of stability".

The immediate Congress strategy for the third phase of polling focuses on Madhya Pradesh and Rajasthan, even as the BJP concentrates on UP. Congress strategist Jairam Ramesh explains why: "These two states represent our Kurukshetra. The BJP has 16 of 25 in Rajasthan and 21 of 28 in MP. If it manages to substantially improve, as it claims it will, that will make all the difference between the NDA forming the government or not". Says Ramesh's counterpart in the BJP, psephologist Sudhanshu Mittal: "If these states are Kurukshetra, the Kaurava party (Congress) will certainly bite the dust". The BJP's assessment is that it will add three seats to its tally from each of the two states, a total of six.

The Congress objective is to ensure status quo, although Reddy claims it will increase its tally by three in Rajasthan. But Mittal believes the cash-on-camera tapes involving three members of former CM Ashok Gehlot's cabinet will cost the Congress dear. To shore up its prospects in the cow belt, Chauhan has been dispatched to MP and Renuka Chowdhury to Rajasthan. Helicopters have been placed at their disposal with the brief: to concentrate only on those seats where the Congress thinks it may have a fighting chance.

The strategy committee last week decided that Priyanka would be asked to campaign only in MP and Rajasthan, where she would conduct roadshows rather than rallies. Sources said she had agreed, but at the time of writing, her programme hadn't been finalised. "With regard to family, we don't know until the last minute," says an AICC member. Contrary to party expectations, the siblings didn't budge from UP for a month. This, after the party had officially announced that the two would campaign extensively throughout the country. An uncharitable explanation is that Rahul and Priyanka, in order to preserve their mystique and the myth of infallibility, dare not campaign on seats the party may lose. 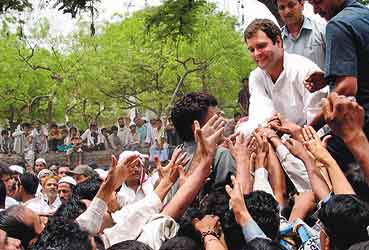 Rahul, meanwhile, will concentrate on UP. In the country's largest state, the party's official estimate is 15 seats, although it realistically expects around ten.The goodwill Rahul's roadshows have generated may work in Poorvanchal, where the party could win three more seats. However, the Congress isn't likely to repeat its first-round success, observes BJP strategist Pramod Mahajan, who's camping in Lucknow. "The Congress gains in the first phase were expected as their traditional seats—Amethi, Rae Bareli, Sultanpur—fall in the first round," he says.

The pro-Congress sentiment in central UP—based on upper-caste angst against the BJP coupled with the Congress equity among Muslims, Dalits and intermediate castes—isn't likely to translate into seats. Says Rahim Baksh "Munna", an SP worker in Misrikh: "Muslims prefer the Congress but in the absence of a credible candidate their realistic option is still the good old SP." So the gains in UP are actually long term, not encashable immediately. The party hopes to push up its voteshare from 7 per cent to 15 to 18 per cent, so that it could become a serious player in the next assembly elections. This time, however, its major stakes are not in UP, but in MP and Rajasthan.

The third and fourth-phase strategy also envisages dispatching 100 central observers to take charge of "A and B+ (winnable)" seats, deploying star campaigners like Sunil Dutt and Govinda in key constituencies. Sonia, too, will restrict her campaigning to a few chosen seats, while stepping up the number of her rallies.

A spinoff of the apparent Congress resurgence has been the growing importance of former finance minister Manmohan Singh. "Most members of the CWC kowtow to him. Everyone thinks he will emerge as a consensus candidate for prime minister, should the Congress be in a position to lead the new government," observed an AICC member. Hope floats.

By Bhavdeep Kang with Poornima Joshi in Lucknow