Silogic: The Fine Art Of Caching In

What to do with 'surplus' food? Don't give it to the poor, pay through the nose to store it. 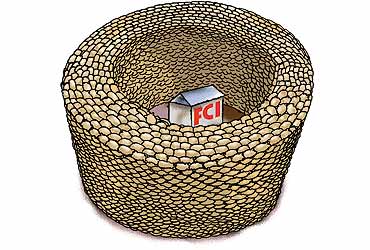 outlookindia.com
-0001-11-30T00:00:00+0553
Post-Enron, the government's policy of giving assured returns on investment—in effect, guaranteeing profits—to the private sector has come under a cloud. Yet, the food and civil supplies ministry has recently decided to adopt a system similar to the "counter-guarantees" associated with the power sector, in order to lure private investment in storage facilities for foodgrains.

The food ministry is willing to pay nearly double: if the Food Corporation of India (fci) currently spends Rs 100 per tonne on storage, the private firm will get Rs 174 per tonne. It is also willing to guarantee that the government will use the private sector facilities in preference to its own. In other words, 100 per cent capacity utilisation for a decade and 75 per cent for another decade. In addition, a tax holiday of five years and a partial holiday for the next five years is envisaged. Not to mention heavy incentives for the financial institutions putting money into the project.

Not surprisingly, 65 companies, both Indian and multinational, had expressed interest in the project until January 21, the last date for submitting EoIs (expressions of interest). Among them are Gammon India, Escorts, the Adani group, Punj Lloyd, Larsen & Toubro, Lloyd Steel, Mitsubishi, Cargill India, Hanseng Industries and Reliance Industries. Public sector companies like the Central Warehousing Corporation and the Container Corporation of India are also in the fray.

Two reasons are given for the creation of privately-run storage infrastructure, the main one being the "surplus" foodstocks. Against a buffer stock requirement of 168 lakh tonnes, the fci now has 580 lakh tonnes (as of January 1, 2002) and believes that by 2003, it will have 675 lakh tonnes. In sharp contrast, the storage facilities available with the fci, the central and state warehousing corporations as of January 1, 2001, total up to a capacity of around 510 lakh tonnes. But, say food ministry officials, the total storage available with the public sector, including bodies like markfed, etc, is actually 680 million tonnes.

The second reason being touted is that the hi-tech silos created by the private sector will mean far less destruction of foodgrains. Currently, says R.D. Kapur, secretary, food and civil supplies, around Rs 350 crore worth of foodgrains is lost annually in transit and storage. A little over one-fifth of the fci's storage facilities are "cover-and-plinth", that is, out in the open. "So while the costs for storage will go up in the short-term, in the long term we will actually benefit," says Kapur.

But the excess payouts to the private sector under the boo (build-own-operate) scheme will amount to Rs 357 crore annually—for 20 years! Around 21 lakh tonnes of storage facility will be created by the private sector. The fci's own annual current carrying cost is Rs 2,300 per tonne for its grains. The private sector will get (in order to ensure a "decent" return of 15 per cent on equity) Rs 4,000 per tonne. While this amount has yet to be fixed, Kapur admits that it could well be more but is unlikely to be less. And that will mean a Rs 840-crore windfall for the private sector, exclusive of the tax benefits.

Food ministry officials admitted that the investment required would be Rs 3,000 crore, roughly Rs 15,000 per tonne, for construction of bulk silos. Assuming a 1:1 debt-equity ratio, the annual interest outgo on investment would come to at least Rs 1,000 per tonne. Include expenditure on labour, fumigation, storage etc, it adds up to Rs 1,500 per tonne. Add another Rs 500 per tonne for maintenance. Finally, if the investors are to be given a 15 per cent return on equity, the cost would be nothing less than Rs 4,000 per tonne. On 21 lakh tonnes, the annual payout by fci for sub-contracting its storage operations to private parties will be Rs 840 crore.

Critics of the scheme rubbish it on two counts: first, that it will create a mini-Enron situation and second that the answer to burgeoning foodstocks lies in feeding people—increasing offtake—rather than storing more and more. Offtake of wheat from the fci has actually fallen since the targeted pds system was introduced, to prune the food subsidy bill. And the food subsidy bill has gone up, with the "carrying cost" or buffer subsidy—essentially, the cost of storage—reaching the dizzy height of Rs 5,000 crore a year. To which the creation of private infrastructure will add even more.

With offtake falling and the subsidy bill going up, the food ministry is in a Catch 22 situation. The buffer subsidy isn't really added to the economic cost of foodgrains but the carrying cost from the period between procurement and distribution—perhaps six months—are added, thus making the foodgrains marginally more expensive. According to Kapur, the answer lies in increasing export of foodgrains and giving a strong impetus to crop diversification.

But a senior economist—who is closely associated with the food ministry and therefore did not want to be named—says an expanded pds is the only answer. "Instead, you're creating an Enron-like situation, where you guarantee returns to the private sector. It's crazy." It would make more sense, he says, if the farmer himself had direct access to cheap storage facilities.

Besides, he adds, a few years of drought and the excess foodstocks could be wiped out. In such a situation, there would be no demand for privately-created storage infrastructure. But the government would be obliged to use the private facilities at the expense of its own, because of the guarantees built into the scheme—an exact parallel to Enron. If the government wants to add to the buffer subsidy bill anyway, he says, it would be better to feed people rather than line the pockets of the private sector.

Prof Jean Dreze of the Delhi School of Economics feels the scheme is "unjustified" and describes it as "absolute madness". Says he, "The (idea) is not to build more storage capacity but to find creative ways of getting rid of foodstocks," adding, "It's strange that at a time when the government cannot find money for food-for-work programmes, it can spend crores on storage facilities." He believes the answer lies in utilisation of foodstocks through income generation and other programmes, like mid-day meals schemes, etc.

Why does the private sector get twice the amount fci spends on storage? Because the infrastructure involved is massive. Nine locations have been identified in Punjab, Maharashtra, Tamil Nadu, West Bengal, Karnataka and Haryana for setting up fully-automated grain handling and storage terminals, with the attendant rail transport infrastructure. A special railway wagon will have to be designed to carry the foodgrains. Since investors are expected to bid for a whole "circuit"—base depots in producing areas and field depots in consuming areas—rather than individual silos, clearly only big players are being invited. Hence, big returns.

The economist points out that the private sector is keen to get into storage infrastructure in a guaranteed returns scenario but will not dream of getting into procurement. That's another Catch 22 situation, says the economist: "While the private sector believes that the government, with its huge foodstocks, can manipulate the price of wheat in the open market, it will not risk getting into procurement." The only answer is for the government to reduce foodstocks.

"If you don't feed people, your buffer stocks can only grow," observes agricultural expert Devender Sharma, stressing the fact that while the government harps on a "food surplus" situation, in actual fact 40 per cent of India's population, including children below the age of four, suffer from malnutrition.Instead of resolving the paradox of food mountains and underfed children, the government is spending money on unnecessary subsidies.