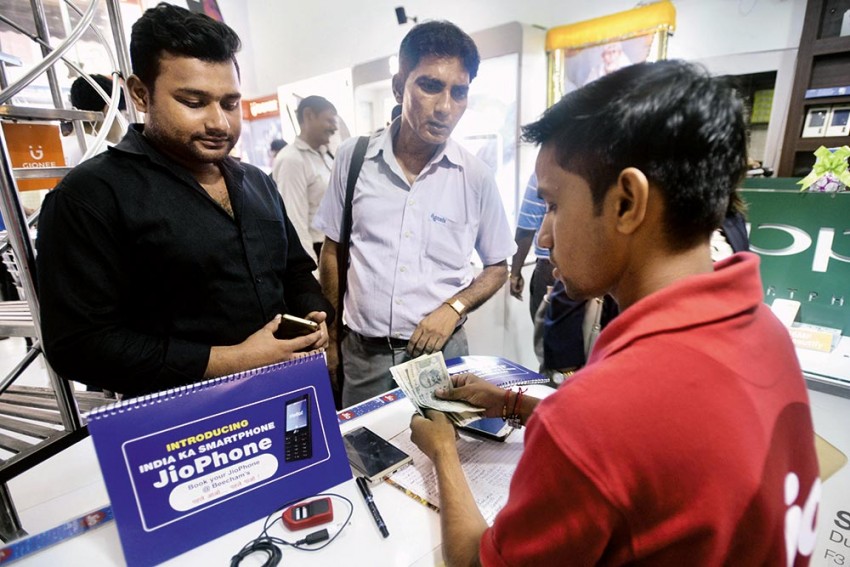 Of 190 Million
A customer signs up at a Reliance Jio store in Delhi
Photograph by Getty Images
Arindam Mukherjee May 30, 2018 00:00 IST Silence Across The Spectrum 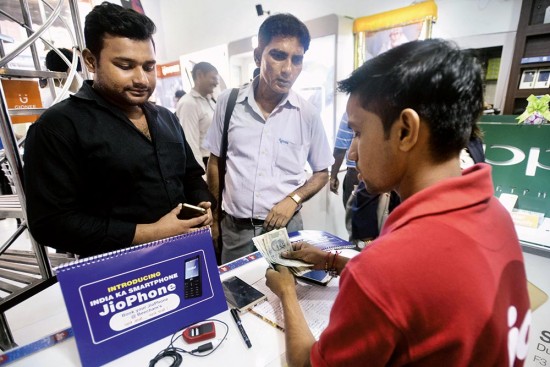 It can only be called an ­inevitable sectoral plunge. Last month, India’s largest telecom opera­tor and ind­ustry ­bellwether, Bharti Airtel, rep­orted its first net quarterly loss for its India operations in over 15 years. The net loss before exceptional items of Rs 652.30 crore came in the last quarter of 2017-18. In the previous year, the company had earned a net profit of Rs 770.80 crore for the same period.

For Bharti Airtel, revenue from its India business makes up about 77 per cent of its total revenues. The company’s consolidated revenue fell by 10.5 per cent to Rs 19,634 crore against Rs 21,935 crore last year, with tariffs from voice and data falling sharply. Revenue from the company’s India operations fell by almost 13 per cent, to Rs 14,795.50 crore.

The other two telecom biggies, Vodafone and Idea, have also reported significant losses. Idea Cellular reported a three-fold increase in its net loss, at Rs 962.20 crore, for the fourth quarter of FY 2017-18. Last year, it had reported losses of Rs 327.7 crore. This was the sixth consecutive quarterly loss repor­ted by the operator. India’s number two telecom company, Vodafone India, also saw its service revenue drop by 29 per cent in the last quarter of FY 18.

If you think these are bad tidings for India’s fastest growing sector, think again. According to experts and analytical agencies, FY 2018-19 will bring in more bad news, as the Indian telecom industry is expected to see revenues drop by around a shocking 40 per cent in the current year. And that is likely to reflect from the first quarter of the current fiscal itself. In a recent report, ratings agency CRISIL said the competitive intensity in the telecom industry further toughened since January 2018 after the new entrant, Jio, started passing on the benefits of cuts in Interconnect Usage Charges (IUC) to customers through lower tariffs.

Across industry and analyst circles, there is agreement that the Indian telecom industry’s moribund condition is because of the advent of Reliance Jio, which has revolutionised tariffs with its offer of free voice calls for life, coupled with dirt-cheap and attractive data rates. This, along with good service and good data speeds, has not only forced other telcos to follow Jio’s tariff model, but has also successfully pulled a lot of voice and data customers from other telcos to Jio.

In January 2018, Jio fired another salvo by lowering tariffs further, or offering more at the same tariff. It increased its data offerings to 2 GB per day in certain tariff plans at the same cost—unprecedented in the Indian telecom industry. As a result, Jio has amassed a subscriber base of close to 190 million in less than two years, in possibly the fastest such feat in the industry. “The entry of Reliance Jio has been the most important factor in this sector, which has aff­ected all incumbent players. The doo­msday predictions are very worrying and should not be brushed away,” says Mahesh Uppal, telecom expert and director, communications consulting company ComFirst India. “TRAI data suggests that there was over 18 per cent fall in adjusted gross revenues in the last calendar year from the previous year. This shrinking of revenue is something every stakeholder should worry about.  Because if revenue falls and business is not good, it affects a company’s ability to borrow and hurts its market prospects. This also hurts the government’s own revenue, as almost 30 per cent of the sector’s revenues go to the government in the form of levies.”

Uppal says that for Jio it is not such a great issue, at least for the near future, as it is currently burning money to get subscribers. But this will hurt them too since, despite their deep pockets, they would eventually need revenues. How­ever, it’s incontrovertible that Reliance Jio’s formidable resources ena­ble them to take short-term hits on its revenue and to take more risk than others at least on tariffs.

In the last year-and-a-half, the telecom sector has been badly hit by Reliance Jio’s onslaught of ultra-low tariffs for data, coupled with free voice. It was hard for incumbent telcos, as over 65 per cent of their revenues still come from voice, though there is a noticeable shift towards data. In data too, Jio has upped the ante by offering very low tariffs for unlimited data packages, which have been lapped up greedily by Indian users.

“The game is shifting to data from voice...as revenue streams decline, profits are hit,” says Raja Lahiri of Grant Thornton.

As a result, there is a significant fall in the usage of the incumbent telcos’ subscribers, leading to a huge dip in Average Revenue Per User (ARPU), the main measuring unit for telecom revenues. Bharti Airtel’s ARPU has fallen from Rs 123 in Q3 FY18 to Rs 116 in Q4 FY18. At the end of the December quarter, Vodafone India’s ARPU had fallen steeply from Rs 132 in the previous quarter to Rs 114. In the fourth quarter, its ARPU fell to its lowest ever—Rs 105. Idea Cellular’s ARPU was also at Rs 105, while Reliance Jio, which forced the misery on these companies, registered a higher ARPU at Rs 137.

“Clearly, there is an impact of competition and the new entrant (Jio), which is causing disruption in the market. The telcos are witnessing losses and the ind­ustry has seen consolidation of players like the Vodafone-Idea merger,” says Raja Lahiri, partner, Grant Thornton India. “The entire game is shifting to data from voice and the competition is largely on bandwidth, speed of data, which means earlier revenue streams around voice are impacted, plus with restrictions on charging interconnect charges and price reductions, voice revenue streams are showing declining trends. This clearly puts pressure on profitability,” he says.

Reduction in interconnect charges is one major factor. From February, the telecom regulator, Telecom regulatory Authority of India (TRAI), cut Inter­nat­io­nal Termination Charges, leading to a ser­­ious dent on telcoes’ revenues. This, coupled with significant reduction in IUC, has led to sizeable losses for older telecom operators. Last October, the TRAI slashed IUC by more than half—from 14 paise to 6 paise per minute—and this February it reduced international call termination cha­­rges from 53 paise to 30 paise. This alone has dented telcos’ financials, as Bha­­RTI, Vodafone and Idea together are est­­imated to garner revenues of over Rs 5,000 crore from incoming international calls. “CRISIL expects the industry’s AGR to decline further by over five per cent on-year in fiscal 2019 owing to continued deterioration in data realisation as the new entrant revises its tariff packs downward. However, growth in data volume, expected at 45 per cent on year as compared to a threefold jump in FY ’18, will limit the decline in revenue to some ext­ent.”  says Hetal Gandhi, director, Crisil Research.

These concerted blows come when telecom operators are sitting on a debt of over Rs 7.7 lakh crore. Says Lahiri, “In many ways, it is a double whammy, with severe competition, tra­n­­­sition of play from voice to data and dec­lining trends in price will continue to put pressure on profitability and cash flows. Further, with 5G coming on the horizon, more investments are required in spectrum, bandwidth and new infrastructure.”

And that is another matter of concern. The new 5G technology will mean more investment for telcos for infrastructure and spectrum. This will both increase their debt and losses.

The tidings are pretty grim. Last year, pushed by lower profits and sinking revenues, the industry cut about 40,000 jobs. This year, predictions are that this number will double on the face of falling revenues and mounting losses. Prior to Jio’s coming, the industry had seen a growth of about 12 per cent. This year, the industry’s adjusted gross revenue (AGR) is exp­ected to fall by 5 per cent.

There is, surprisingly, a silver lining—data traffic is increasing for all players and the rate of increase is encouraging. But revenues from data will take time to stabilise, as India is on the cusp of a data revolution. Telcos hope that data will bec­ome their saviour and pull them out of the red. With 5G bringing in a fresh new paradigm in data consumption, that could be just around the corner. That is, if Jio has not already got more tricks up its sleeves.