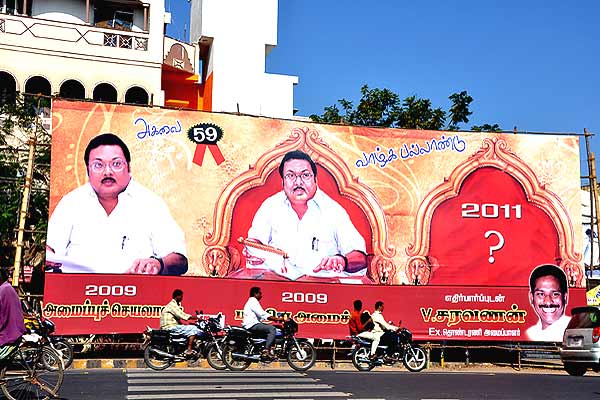 Is Tamil Nadu deputy chief minister M.K. Stalin the CM-in-waiting, or is it his brother, M.K. Azhagiri, the Union chemicals minister? That question is being debated furiously after Azhagiri declared at his recent 59th birthday extravaganza in Madurai that their father, M. Karunanidhi, would again become chief minister in 2011.

That statement contradicts what the Kalaignar said recently—that Stalin would finish his “unfinished tasks”. He has also reiterated, over a few months, that he’s ready to “set aside” his position after the World Classical Tamil Conference in June. Read together, the statements could be said to indicate that he wants to hand over the baton to Stalin.

But C. Lakshmanan, a professor at the Madras Institute of Development Studies (MIDS), looks at it differently. “Even if there’s infighting, it will be in-house,” he says. “They will see to it the party does not suffer. They know that if they fight, it’ll be advantage Jayalalitha.”

There’s little doubt that Azhagiri has  become as big as the biggest cutout that came up on the Madurai landscape to mark his birthday on January 30. An endless queue of politicians, ministers, MLAs, MPs, bureaucrats and businessmen greeted him, and Madurai’s daily two-hour power cut was ignored so that hoardings could be illuminated 24x7 and mikes hailing him wouldn’t go silent. Last year, his followers called him the ‘Obama of India’. This year, almost all posters and hoardings underlined one message—that Azhagiri should be elevated. Speculation that Azhagiri is craving to come back to Tamil Nadu from the Centre heightened when one poster showed a question mark over the CM’s throne after the 2011 elections while another had a play of words, calling him a CM—which could mean either chemicals minister or chief minister! 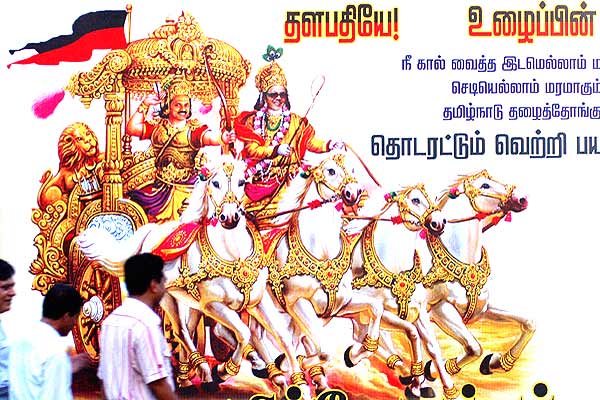 Icon game The brothers as Krishna-Arjun

Thirty years ago, Azhagiri had been banished to Madurai by his father because his image as a muscleman was damaging the party. But he has clawed his way back. Stalin, on the other hand, is believed to be in Karunanidhi’s favour because he has worked up through the ranks, becoming a minister only in his fourth term as MLA. He has also cultivated his own loyal band of ministers, MLAs and district secretaries. Since becoming deputy CM, he also handles many of his father’s portfolios.

All this has made Azhagiri insecure. “His statement that his father will continue means that he is not reconciled to the succession plan drawn up by Karunanidhi and is signalling that it’s the party that should decide on the successor,” says an observer.

People joke that Karunanidhi has learnt to balance the conflicting ambitions of his two wives, Dayaluammal (the mother of Azhagiri and Stalin) and Rajathiammal (the mother of Kanimozhi), so the latest uprising is a piece of cake. “Karunanidhi enjoys the division and has merely enacted the retirement drama to keep his children in check,” says Cho Ramaswamy, editor of Thuglaq. “He reiterated his retirement statement, waiting for someone to react—and Azhagiri has.”