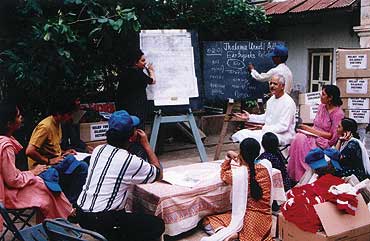 outlookindia.com
-0001-11-30T00:00:00+0553
Back in 1974 Siddhrajsinhji spurned Paris for Dhrangadhra, the land of his former subjects. Once a principality, Dhrangadhra is now a dot on the map—halfway between Bhuj and Ahmedabad. Here, Siddhrajsinhji and his wife Kavrani Kanchande spend their time piecing together lives torn apart by political apathy and divine indifference. To the people of Dhrangadhra, Siddhrajsinhji is "Siddhbapa", Gujarati for "Siddh uncle". The couple manage and partially finance the Jhalama Unnati Astha (jua), a 10-year-old ngo with a "people's agenda". jua's responsibilities include primary education, the preservation of a bird sanctuary in the Little Rann and the equitable distribution of earthquake relief in the remote villages of Saurashtra.

When Siddhrajsinhji returned to his roots, he was appaled by what he saw. Lines appear on his broad and regal brow as he paints this picture of woe: "There were no jobs, no proper schools. No attempt was being made to promote industry. The monsoons played truant twice in three years. There was no irrigation. Water was scarce and conservation non-existent. The area's only cash crop, cotton, was wilting. Without a votebank in sight, each successive government was busy shaking hands elsewhere."

Siddhrajsinhji responded to Dhrangadhra anguish by doing something no government had ever done. He carved out a handicraft industry in the area. Apprentice schools were opened where master craftsmen from neighbouring towns shared their ancestors' secrets with Dhrangadhra's men, women and children. These people now chisel a livelihood from stone and silver and the work produced is exported to propel the town's economy.

In 1990, in her first act as chief trustee of jua, Kavrani Kanchande opened two schools, English-medium Sri Rajini and Gujarati-medium Rajya Shala. The schools share a campus on the old palace grounds where 800 children learn the values of independence, self-appraisal and equality. "Our kids studied in these schools," says Siddhrajsinhji and adds, "so did our servant's kids."

In Kanchande's alternative education system, two-and-a-half year old children spend nights out under the open sky. Older children hop on to their bikes and explore the Little Rann. They stage plays, compete in sports events and dance to the rhythm of the Dandiya. Parents pay just enough to settle the salaries of teachers. "Although money helps, a lot can be done with a shoestring budget," says Kanchande. Some of her students have moved on to Mayo Girls and Rajkumari College where they hold their own against toppers.

For most of the year, the Little Rann of Kutch—formerly the Dhrangadhra Rann—is a vast wasteland. But when monsoons arrive, a miracle unfolds. The sea gushes in, embracing the rivulets of Gujarat and Rajasthan and the desert transforms into a breeding ground for shrimp. The pink flamingos arrive in droves and so do the Caspian terns. This unique eco-system is today on the government's "hit-list". Deemed a wildlife sanctuary, the area is about to lose its protected status. Official moves are afoot to "denotify" the sanctuary in an attempt to save illegitimate salt mines and shrimp farms that have mushroomed within the sanctuary. Says Siddhrajsinhji: "The trust won't let that happen." jua has moved the high court against the government's denotification order.

On January 26, 2001, earthquake relief too entered jua's agenda. In the confusion that followed the fury, volunteers of the trust were among the first to act. They gathered evidence, assessed damage, identified victims and dispatched supplies. Siddhrajsinhji and his team cemented a fraud-proof method of relief distribution. For instance, tents were given as a loan—not as a donation—to prevent their sale and community leaders were asked to submit lists of the homeless for verification. Within days, 126 villages resurfaced and eight hospitals and 65 schools reopened.

Unlike other ngos in the area, jua is home grown. Says Kanchande: "My husband's family has been here for nine centuries. We've no motives. We've no political ambitions. We don't discriminate between men and women, Hindus and Muslims. Most important, we're small, which is why we value resources."

If you want to help in the reconstruction of Gujarat's schools, contact Siddhrajsinhji at goldrays @ vsnl.com.