There's a bathroom in every house. But how many of them have a tornado in the shower? 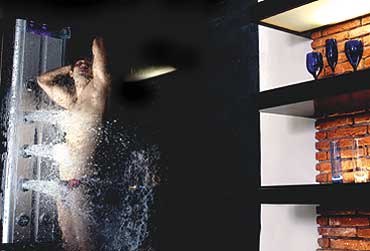 We’re calling this Space Odyssey 2006. It’s one that begins in the most unlikely place of all: the loo. For, as bathing experiences go, we haven’t seen a more blatant contrast in styles and space usage than when people are starkers. For Delhi-based executive Rajeev Lamba, power breakfasts are passe. He starts his day with a power shower under his recently purchased RainSky, a steel shower tile, measuring 2x2 feet, that works like an automated weather god. At the press of a button, it blasts his body with a thunderstorm as vertical jets spew wet, wild froth over his head and torso. Invigorated by this super-soaker, after a few soapy seconds he turns the flow to soft mist while a chromatherapy light panel changes colours, from energising fire-red to cooling aqua-blue. Storming him into wakefulness and soothing him with mist, Rajeev’s water-tile cost Rs 2.5 lakh. Yes, that’s just the cost of the shower in his living room-sized loo.

Artist Pinakin Patel, who lives in Alibaug along coastal Maharashtra, created a simple and deeply sensuous experience—the ceremonial ‘utsav’ bath—at a fraction of this cost, a year ago. "My bathroom talks of water conservation," he says, "it does not have a shower nor a bathtub." What he has is a square wooden bucket, lined with stones. When he turns on the tap, water gurgles through the rocks, creating pleasant ‘therapeutic’ sounds as the pail fills. A few drops of bath oil help suffuse his vast 10x15 foot bathspace with fragrance. And finally, as a light in the bucket comes on, "making the water glow like nectar," Pinakin perches on a flamed granite slab platform and pours this scented nectar over his body with a traditional lota. "Luxury is not about buying expensive things," he declares, "it’s about elevating functionality." Rubbishing hi-tech shower temples, he says: "It’s passive bathing before high-pressure jets where you get blasted like a vehicle at a car wash." 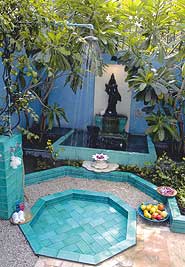 From bodily-function sites, bathrooms are being transformed into indoor oases. In cities where pipes are often filled with the hollow sound of air, now it’s the free flow of precious water, matched with designer ambience, that is separating the haves and the have-nots. Among those for whom the water gods are always willing, the indulgence index is at an all-time high. The change is measurable in square feet, spends and snazziness. Ravi Kohli’s 3.5-acre farmhouse, on the Delhi-Jaipur highway, spurns all conventions. Rather than a three-bedroomer, this civil contractor built a single-bedroom house, devoting a third of its space to a spectacular sapphire and ivory tiled bathroom. His 600 sq ft bathtravaganza with a steam cabin, jacuzzi, split unit air-conditioning and outdoor shower in a landscaped courtyard, belie his bathing philosophy: "Luxuriate."

Interior designer Alex Davis, who also retails at home-decor stores in Delhi and Mumbai, says: "Bathrooms and kitchens are the trendiest spaces in homes today that exploit the privilege of privacy." You see this in Rina Singh’s Gurgaon home, where "no guest tour is complete without a visit to my bathroom." Rina broke down a series of rooms to build her penthouse fantasy filled with twin sinks, a tub-for-two and a dual shower opening onto a Zen garden. What protects this lady from prying eyes in neighbouring buildings is foliage in antique planters.

Bathrooms and kitchens now command 50 per cent of the home-interiors budget, and as much as two-thirds of this spend is lavished on fittings. As always, outrageously priced products attract cachet seekers. Says Abhinav Khandelwal, director of the designer-bathroom store FCML, which has a country-wide presence: "Bathrooms can be the most expensive cost per square foot room in the entire house, where you can spend anything from Rs 10,000 to 10 lakh on a sink, tap or tub."

People who can are willingly pissing away fortunes in toilets signed by global design god Phillip Starck or spitting into sculptural basins by Jacob Delafon, which retail for a few lakhs each. These prices do not include necessary accompaniments like designer taps, and internals such as pipes, pressure pumps, water softeners and descalers, without which these systems go kaput.

Another palpable trend is the return to nature. As showers go, the Raindance originally designed by Hans Grohe is one of the most imitated fittings, with cheap Chinese look-alikes available at hardware stores. Costing anything between Rs 18,000-2 lakh, this device sucks in air and then releases water, shaped like raindrops, for those who love waking up to monsoon mornings. Products like Riverbath tubs recreate cascading waterfalls, white water rapids and swirling mists. Hollowed-out coconut palm trunks are being converted into outdoor sinks. A craving for quietude also has people spurning coloured fixtures that cramp space. White is the dominant colour of fixtures today. Not hospital white, but pearl or eggshell white, or ivory. 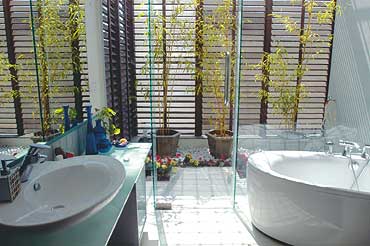 Spas are inducing this new-found sensuousness, as more people yearn for a soak in mountain-view bathtubs at spas like Ananda-in-the-Himalayas, petal baths at Rajvilas in Jaipur; or an outdoor bath at Bangalore’s city hotels. Architects say client wishlists often include a desire for an open-air bathroom. "Where we can’t break out, we place a trough of planters in an enclosed bath for that added natural dimension," says Delhi-based architect Narayan Moorthy of Kumar Moorthy & Associates.

Ornithologist Bikram Grewal says: "I always dreamt of having a bathroom larger than my bedroom." In his hideaway home in Dehradun about a year ago, he mounted his collection of botanical prints in a 20x20 sq ft bathspace. The planned vantage point to view these prints? The sunken tub.

Style guru and civic activist Romi Chopra adds a socio-cultural spin: "We’ve moved away from the chee-chee Victorian notions of bathrooms back to the classical Indian idea of snan, as an open-air cleansing experience."

Chopra’s open-air bath on the ground floor of his Vasant Vihar residence in Delhi abuts a busy street. Here, behind his garden wall, Chopra has created a ‘bathing sthal’, with stone sculptures of Bhu Devi (the Earth Goddess), a reclining Vishnu, champa trees and a perfumed motia vine that winds around his shower. For the last decade, he’s bathed here from Holi to Diwali. During winter, he uses an adjoining indoor bath gallery, lined with art by Shamshad Hussain and Sanjay Bhattacharya. 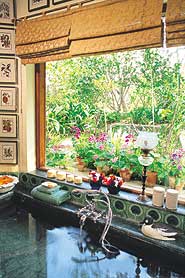 Conservation architect Smita Datta Makhija, who works in Delhi, ‘brings historical contemporaneity’ to projects. This includes loos. In a rare site, where the bathroom was blessed with double the usual ceiling height, Smita designed the master bath in Bisazza glass mosaic over two storeys, recreating a drapery effect used in ancient Rome. "It’s much more dramatic than static tile," she says. The first-floor dressing area, with a balcony looking down upon the tub, adds a decadent dimension for her clients, a couple in their 40s.

At another home in the posh Anand Niketan area, Smita married the Islamic elements of Andalusian Spain with Indo-Muslim architecture. "What’s Indian?" she asks. "Wasn’t the Red Fort created by Shahjahan who was envious of the Isfahani monuments in Persia?" Inspired by these connects, she designed a blue-tiled bath topped by a dome made of varq or silver leaf. What else would befit modern moguls?

The antithesis of such excess, installation artist Puneet Kaushik’s loo in a modest flat in Delhi’s Alaknanda locality, merges reality and politics with a risque touch. It’s made entirely of reclaimed junk. Using a 100 neon-coloured water matkas or kodums, distributed by Tamil Nadu’s former CM J. Jayalalitha during Chennai’s water crisis, Puneet fashioned a window screen that lights up as the sun strikes his loo. For the evenings, he sets out scented candles whose flames dance upon glass bead curtains made in Meerut. Just to alarm males who perch for too long on the thunderbox, he’s lined up Egyptian papyrus paintings whose wicked theme is castration. So, even when the water runs out, Puneet says his loo is stocked with "entertaining scenes". Next time you got to go, look around before you leak.