A page of work and leisure news from India Inc 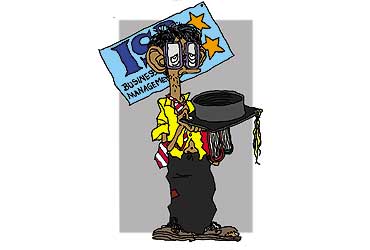 Swadeshi Goes Global
After landing the much-talked about Rs 800-crore contract from the state-owned Oil and Natural Gas Corporation, Larsen & Toubro (l&t) is now into something interesting. The 100 per cent Indian company (the name comes from the fact that it was set up by two Scandinavians) is in advanced stages of negotiations with sws Defence AB (nee Bofors AB) for supplying components to the Swedish arms major. These also include spares for the 155mm Bofors howitzers. Indeed a reason to cheer for India. Unless you still presume l&t to be a Scandinavian giant.

Neighbour's Largesse
This has finally happened, though Dhaka—for reasons unknown—refuses to make it public yet. Last week, Prime Minister Begum Khaleda Zia agreed to lift the ban on Bangladesh's gas exports to India. The message was conveyed to a team of US diplomats who called on the Bangladeshi premier. The ban, it's reliably learnt, will be lifted from May 1. Initially, the gas will be exported to energy-starved eastern Indian states through pipelines conceived by Indian companies like the Gas Authority of India and global giants like Unocal, Shell, Occidental and Crain Energy. Bangladesh's current in-place gas reserves are estimated at around 23 trillion cubic feet, of which approximately 13 trillion cubic feet is recoverable. About three trillion cubic feet of the reserves have already been extracted.

Curbing Ambitions
Is it true that the much-ballyhooed Indian School of Business is delivering rather less than it promised its starry-eyed students? Reports from Hyderabad indicate that this B-school, set up with help from Wharton, Kelloggs and London Business School, which admitted students on the basis of gmat scores, and which claimed it would only be interested in placing its graduates in global (read foreign) jobs, has had to scale down its ambitions mightily. Firms like Dr Reddy's Laboratories and Bajaj Auto, which don't get the chance to recruit from the iims (and isb was supposed to be better than the iims, right?), are hiring at the isb. Even the salaries offered are no great shakes. Indeed, in many cases, the annual package being offered to the isb graduate is much less than the fees paid for the one-year course!

The Tellers Of Sonagachi