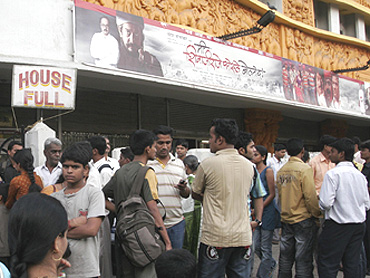 Bang in the middle of Mee Shivajiraje Bhosale Boltoy (This is Shivajiraje Bhosale Speaking), the film's protagonist Dinkar Maruti Bhosale lashes out at the Maratha legacy and Maharashtra's heroes, from Bal Gangadhar Tilak to B.R. Ambedkar and Veer Savarkar, for the insults that Maharashtrians must suffer in Mumbai. In the same dream appears Chhatrapati Shivaji, astride his horse, sword in hand, to correct Dinkar's acutely negative self-image. By the end of the three-hour film, Dinkar is proud to be a Maharashtrian and wears his Marathi asmita on his sleeve, without running down 'outsiders' and non-Maharashtrians. What's even better, he inspires other Maharashtrians to straighten themselves out.

In a politically surcharged climate that makes capital out of the Marathi manoos's seeming marginalisation and oppression in Mumbai, Dinkar's is a timely and remarkably sane voice. Amid the endless politics over Shivaji, his is a calm and wise voice. But Dinkar's voice is not really his own; he articulates what Shivaji thinks and speaks, when he appears apparition-like at key moments in the film, a la Mahatma Gandhi in Lage Raho Munnabhai.

By the time it ends, this film, running to full houses in theatres across Maharashtra, has made several significant points. Among them: migrants in Mumbai are not necessarily 'outsiders', they are Maharashtrians; Marathi-speaking citizens of Maharashtra have no reason to feel inferior; they allow politicians to claim Shivaji's legacy, they should use it to assert their own identity in a positive way. At one point, angered by Dinkar's litany of complaints against 'outsiders'—Gujaratis, Udupis (south Indians), Sikhs, UP-walas—Shivaji even admonishes his newest disciple with the words: "Do not credit outsiders for your own failures".