Sleepy Guwahati turns boomtown, with money to burn and a 'with it' attitude 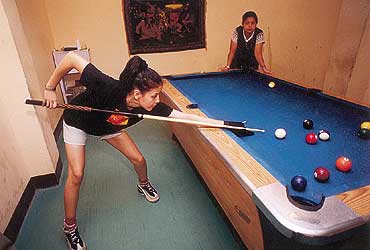 outlookindia.com
-0001-11-30T00:00:00+0553
Just 10 years ago, it was a city under siege. Racked by insurgency and in the shadow of the gun, the legendary Pragjyotishpur or City of Eastern Light straddling the Brahmaputra had lost its sheen as the gateway to northeastern India. Militants, mostly belonging to the United Liberation Front of Assam (ULFA), held it to ransom, extorting traders and creating bloody mayhem. Troops patrolled round the clock, business was dull and there was little nightlife to talk about.

No longer. Guwahati has endured a stormy decade-long militancy—exacerbated by insurgent bushfires—to rise Phoenix-like, from the ashes. The Northeast's economic hub is again flourishing, thanks to a real estate boom and frenetic consumerism. Fuelled by growing commerce and slush money, the city is living it up again. Glitzy one-stop shops, multi-cuisine eateries and spiffy pool parlours dot this once dreary and languorous city. People are splurging on weddings and parties. Fashion shows are a rage with the young. "Militancy is far from the urban people's mind now," says Assam chief minister Tarun Gogoi. "It is as if ten years of suffocation has suddenly lifted."

The signs are everywhere—consumer spending is up to break-neck speed. Consider the findings of a Federation of North East Industries and Commerce (FINER) survey on Guwahati's spending habits:


The spending spree is as if they are trying to make up for lost time. Through the '90s, the city's rich shunned flashy parties and weddings for fear of becoming targets of the militants. A tea baron, preferring anonymity, says: "In the early '90s, we even stopped having anniversary parties since the 'boys' (militants) were everywhere. Every celebration was subdued lest we receive a notice to pay up."

Today, big parties and bigger weddings are the order of the day. Guwahati is still discussing the marriage of a newly elected legislator last month, attended by 15,000 guests. Some 1,000 uniformed attendants served the guests. Conspicuous consumption, which overtook most of India in the immediate aftermath of the liberalisation, is only now making its presence felt in this once-sleepy city.

One indication of the spending spree is the growth in number of clubs and body fitness centres. Among the urban rich, clothes are only one visible sign of the new spirit. It extends to all aspects of life—be it house, car, the latest hi-tech audio-visual gadgets or taking to pool with a vengeance. Holidays in the Far East (Bangkok, Singapore being the most preferred destinations) once a year are considered routine. Laptops, digital cameras, DVDs and handycams are considered normal acquisitions in well-to-do households.

If these are signs of a conspicuous consumerist streak, no one minds. Guwahati is adapting fast to the latest lifestyle trends. Take the craze for playing pool or for fashion shows and beauty contests. The bold and the beautiful are playing an 'at-par-with-the-glam-set' game with the rest of the country. Take the husband-wife team of Dilip and Meenakshi Choudhury. For them, life's a big celebration, to be lived to the full. The couple are regulars at newly opened pool parlours or at the beat-fuelled local parties. Says Dilip, a businessman: "The idea is to work hard and play hard." Agrees Anurag Baruah, an English lecturer: "Our group loves to keep up with the latest, be it music or clothes."

The live-it-up philosophy among the young prompted P.Dutta to open Sports Bar in the heart of Guwahati, combining pool parlour and cyber cafe. Spread over 1,500 sq feet, it has four pool tables and several terminals for Internet buffs. And for a pricey Rs 100 an hour, youngsters from wealthy families get to play pool, the perfect opportunity to be "with it". Says Dutta, sated with a year's good business: "All the tables are booked in advance. During weekends, the rush is tremendous."

Around a kilometre away, Dutta's videogames centre is booming too, drawing families in droves. Children love playing the latest videogames and indulgent parents feel relieved that there's something new on offer. As government official Anupam Sarmah surmises: "Now there are places to take the kids. Earlier, evenings were limited to the park." The other craze is parties onboard the spree of floating restaurants moored along the Brahmaputra's banks.

New shopping arcades, multi-storeyed complexes and eating joints seem to be sprouting all over the place. And according to one estimate, there are two lakh vehicles here on the roads—in a city of just 14 lakh people. Inevitably, civic amenities have failed to keep pace but those in an indulgent mood hardly care. The one-stop stores are also becoming a craze, catering to the growing tendency among yuppies to shop till you drop. Sohum, a new entrant, is spread over 12,000 sq feet—designed to cater to the high-spending customer. Says owner M.L. Jalan: "Three years ago, I went to Mumbai and saw Shopper's Stop and decided to replicate it here. The response in less than two years has been very encouraging."

Which isn't surprising, considering the kind of disposable income some sections in Assam have. Cellphones, for instance, are seen more as a fashion accessory rather than a means of convenience. So is the case for brand names. Says Basant Surana, a young businessman: "Guwahatians are trying to make up for the lost years. They are in a hurry, so you see the latest stuff being flaunted around."

Militancy may have been marginalised in the people's minds but a question bugging academics is: where is the money coming from, to fuel such rampant materialism and noveau riche ethos? For one, the state government is near-bankrupt. H.N. Das, former Assam chief secretary, thinks a lot of the consumerism is being serviced by slush money. "A section of officials, businessmen and politicians siphon off development funds, which in turn fuels the kind of lop-sided consumerism that we are witnessing. Of course, there are also those who are making an honest living and enjoying it."

Guwahati's rising fortunes are inextricably linked to the fact that things seem to be looking up finally in the beleaguered state. Central funds through World Bank infrastructure projects and private investment are also contributing to an apparent economic boom in Assam. Companies such as HLL, P&G, and Godrej are setting up new manufacturing facilities in Assam. The real estate sector has already seen tremendous growth. According to official sources, 1,770 building permissions were granted in Guwahati alone, between April and December 2001. Sources in HDFC say business at the Guwahati branch has shown a steep increase over the past couple of years. "The flight of capital witnessed in the early 1990s has certainly been reversed. Now people are staying put, investing in real estate," an official of a housing finance company says. And with top-line banks like ICICI, HDFC Bank and finance companies like Kotak Mahindra setting up shop in Assam—after ignoring the state for years—real estate is booming.

And yet, Guwahati's apparent prosperity could be misleading. Assam's public debt is a staggering Rs 10,000 crore. The state government struggles to pay salaries to its five lakh employees.More than 36 per cent of the 2.34 crore population lives below the poverty line. But right now, Guwahatians don't seem to care about these grim facts. Right now, it's party time and no one's complaining.