She Who Will Not Break 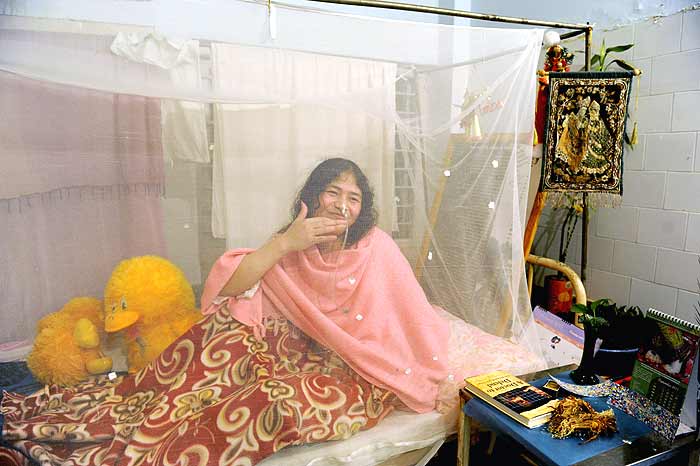 This was the satyagraha the country forgot—her decade-long test of will had been mostly erased from mainstream consciousness. It took another agitation, bang in the centre of India’s capital—one that was much feted and fussed over—for people to remember the Irom Sharmila story. It’s been unfolding with mind-numbing monotony of detail in faraway Imphal since November 2000. That’s when Sharmila went on a hunger strike demanding the repeal of the Armed Forces Special Powers Act (AFSPA) in Manipur. The routine hasn’t changed since then: her being force-fed in the special ward of Imphal’s Jawaharlal Nehru Hospital. After her first arrest for “attempting suicide”, and the subsequent judicial custody, as per law, she is released every year, only to be repeatedly rearrested due to her steadfast refusal to give up her fast.

The Anna Hazare agitation, because of the unmissable analogy, has now brought the spotlight back on Sharmila. She isn’t unhappy about the comparison. She says she looks up to Anna Hazare and is happy that his anti-corruption campaign yielded results, and that he could end his fast after 13 days. “I have a lot of reverence for Anna Hazare. I revere his struggle. The fight against corruption is a very noble cause. He invited me to go to Delhi to join him in his campaign. I would have been happy to do so. But I’m a prisoner. I’m tied to all this (she gestures at her room). Yes, this is the difference between him and me. I am a prisoner. He is a free man. He can go wherever he wants to. So I have invited him to come. He and his team are very welcome here. If the people of India came out in our support, my demand to repeal AFSPA would have been met by now.”

In Hazare’s victory, Sharmila sees the beginning of the end of her own struggle. “I feel finally the time has come,” she says with a smile. That’s why she has invited Team Anna to Manipur. Says Irom Singhajit, Sharmila’s elder brother, and someone who is closest to her: “Suddenly everyone has woken up from a slumber and realised that there is this girl who has been starving herself from the age of 28 for the sake of justice.”

After all these years, does Sharmila miss regular food, even though she is force-fed thrice a day with nutrients and multi-vitamins? “Yes, I do miss food,” she candidly admits, “that is why I don’t think about it. I love honey and I love coconut water. Also, bitter gourd. But I love sweets. I ate a lot of pastry the day before I went on the fast. When I go back to normal life I will eat. Now I put cotton wool in my mouth so that I don’t swallow anything. I don’t even brush my teeth so that I don’t swallow anything.” 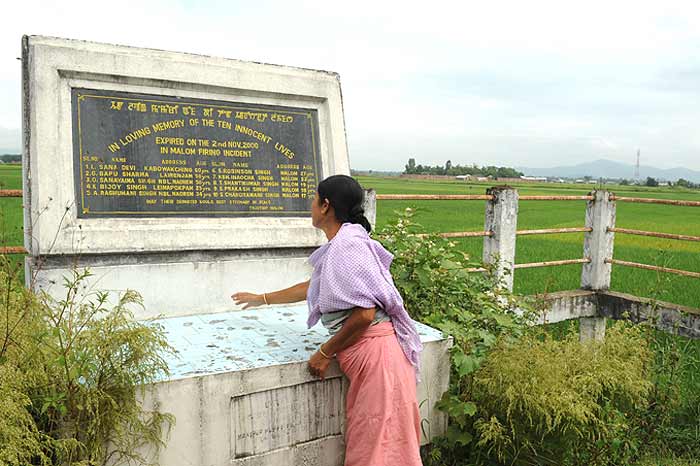 The spark A memorial for the victims of the firing in 2000 at Malom village, Manipur. (Photograph by Sandipan Chatterjee)

Sharmila’s fast began two days after ten civilians—including school students and a 61-year-old woman, inhabitants of Manipur’s Malom Village—were shot dead, allegedly by Assam Rifles commandos. As she recounts the horror and tragedy of that day 11 years ago, Thoibi Debi, mother of one of the boys who was killed, breaks down. When she recovers, she says, “It was 3 pm. His father had just come back from work. My son asked him for ten rupees for the bus fare because he had to go for his science tuition. Fifteen minutes later he was gone forever.”

The AFSPA, imposed in “disturbed” states like Manipur, vests the armed forces with wide powers to detain, interrogate, arrest and even kill on suspicion. Sharmila’s crusade highlights the plight of people who live in conflict zones and bear a terrible brunt, regularly caught in the crossfire between extremists and the army.

However, of late Sharmila has been in news for her relationship with 48-year-old writer Desmond Coutinho, a British citizen of Goan origin. They communicated for almost a year and professed their feelings for each other. They met once—this March. Sharmila admits, “Yes, I love someone. I am made out to be an extraordinary woman. I am called an iron lady. But I am human too. I want to lead a normal life. And do all that an ordinary woman wants to do. Like get married. I will do it when my demand is met.”

Desmond Coutinho and Sharmila write to each other, but have met only once. Her supporters don’t like the relationship.

To Sharmila’s discomfiture and unhappiness, her relationship with Coutinho is met with hostile suspicion by her supporters. Even her brother Singhajit disapproves: “That man—Desmond—is a government agent. He is trying to make her weak. His only goal is to marry Sharmila and take her away. We will not allow that to happen. She is struggling for over a decade. How can she just abandon her struggle for the love of a man?”

Sharmila says she will not give up her struggle and betray the cause. “No, I just can’t afford to run away. When I began the fast, I didn’t think it would last this long. I have been living from moment to moment. But I try not to think too much about it. I think of God and I leave it all to Him. I don’t think anyone wants to spend a life-time imprisoned in a hospital bed, tied to a nose-tube.”

Sharmila spends her time in custody reading and writing. Her favourite books? The Gita and the Bible. Right now she is reading a book by Minnie Vaid on Binayak Sen. The author personally gifted her a copy. “She wants to write about me too. But I’m not sure,” says Sharmila.

At her home in Kongpal Kongkham Leikai Porompal village, Sharmila’s mother Irom Sakshi says it would be irresponsible for her to ask her daughter to return home and have a hearty meal, although, like any mother she wants to feed her. “I never visit her as it will make her weak. And it will make me weak. I will never ask her to call off her fast because she is struggling for the people. Yes, she is the youngest of my nine children but she has ceased to be just my daughter. She is also the nation’s daughter now.”