'She Was So Happy'

Neena Gopal talks to Benazir's political secretary, with her then 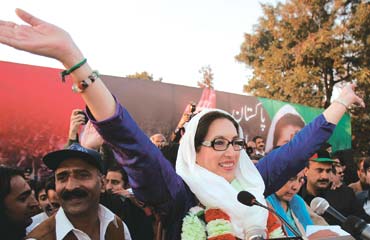 outlookindia.com
-0001-11-30T00:00:00+0553
Naheed Khan was Benazir Bhutto's alter ego, her factotum who organised political rallies, her shadow who was expected to act as her human shield. A former member of the National Assembly and Benazir's political secretary, Naheed was at the PPP leader's side at the time she was assassinated. Here is her account of the leader's last moments.

"She was so happy, so thrilled that the rally had gone so well that she got into the car, turned to me and kissed me on my left cheek, then on my right cheek and said—'all credit goes to Naheed'. Bibi gave me a huge hug, and we were both laughing, which is when my husband Safdar (Dr Safdar Hashmi) said—'come on bibi, even I should get some credit'—but bibi said, 'No, it's all Naheed's doing'. Then she looked out of the window and said, 'There are so many people waving, please open the sunroof so I can wave back.' The next thing, I heard what I thought was a firecracker. I had no idea she had been shot.

But she fell back into the car and I thought as she sat down and slumped on to me without saying a single word that she was exhausted, that she had fallen back in because she had lost her balance. And then I felt something warm dripping on to me, which is when I started screaming. I realised it was her blood and that the silence meant she had died, perhaps instantly, and I hope painlessly. Amin Fahim saab (PPP vice-president) was in the car, so was her servant Laiq, and despite the mayhem of the attack, we raced to Rawalpindi General Hospital but I knew it was too late. We had lost her."