When I saw Wasim Akram cross 500 wickets, I was wondering what was going through Shane's mind. He was approaching 500 wickets in Tests. 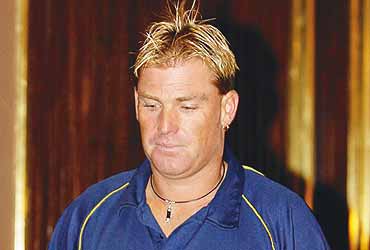 outlookindia.com
-0001-11-30T00:00:00+0553
One week to go in the league stage, and Australia are the only team clearly in the Super Six, with India all but assured of a berth. The Indians are looking good, good enough to make it to the semis. Their win against England by a decisive margin would give Saurav and his boys a great deal of confidence as the tournament progresses. Sachin Tendulkar is in exceptional touch, but that's not the only good news for the Indian camp—many others are coming good. Rahul Dravid played an important hand against England, and Virender Sehwag seems to be in such good nick that a good score is just round the corner. It is also significant that the bowlers, Javagal Srinath, Zaheer Khan and Ashish Nehra seem to enjoy bowling in South African conditions. While some say they got better conditions to bowl against England, they showed that they had the ability to make the most of those conditions.

As Australia readies itself for the next stage of the tournament, they will be eager to ensure that some of the middle-order batsmen get some time in the middle. The batting has not really been tested, and the likes of Michael Bevan and Darren Lehmann have not played much cricket in the first three weeks of the Cup. Both were missing from the only game in which the batting was rocked a little, against Pakistan. It is important that they are in good nick, and Ricky Ponting would want to ensure that they are up to the job, should they be needed.

The other big news is Shane Warne's one-year ban. When I saw Wasim Akram cross 500 wickets in South Africa, I was wondering what was going through Shane's mind. He was approaching 500 wickets in Tests, and it must be a blow that he will not be able to go for it this year. However, nothing can be a greater loss for Shane than the fact that he will not be playing for Australia. These landmarks are important, but it was representing his country that comes first for him. Only he can answer whether he will be playing next year this time, and at this stage I don't know if Shane himself knows what the future holds. Shane is no drug cheat, I'm sure of that, and the ACB are also clear on that issue. Sad as his case may be, I think icc must introduce such tests to ensure that cricket is played on a level-playing field. It's not for me to say whether a one-year ban is too harsh, but drug tests must be persisted with to improve this sport.

Coming back to the tournament, Kenya's win over Sri Lanka has really opened up Group B. I am not surprised that Kenya beat the Lankans, because I have felt that they are one side that has the ability to test Test-playing nations. They displayed flashes of this during our tri-series there last year, and on one occasion, came very close to defeating a full-strength Australian team. Kenya reminds me of the West Indies in their athleticism and attitude.

Canada too gave the Windies some sort of scare. The wrecker-in-chief in that game was John Davison who played his cricket in Australia though he was born in Canada. I've played against him on a couple of occasions, and he is basically an off-spinner who used to come in at eight or nine. He was a dashing, useful late-order batsmen, and had a couple of 50s to his credit. However, he never scored a century in those days.

The biggest surprise in Group B remains the below-par performance of South Africa. There are a few problems to sort out. But I would still rate them up there among the top two-three teams, and they are still one of the hardest sides to beat.It remains to be seen whether they can overcome the loss of Jonty Rhodes as the tournament progresses. It's in the later stages, when the going gets tough, that a player like Jonty can make an even greater difference in the side. (Gameplan)