Pop diva Tina Turner takes a boatride down the Ganga. Madhu Jain chats her up. 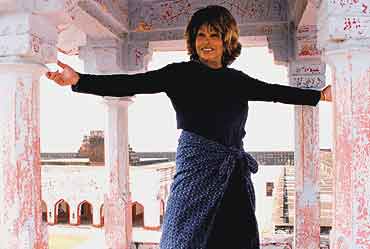 It’s that strange neither-here-neither-there hour when the sun rubs its eyes and settles down for the night. We are on a boat being rowed at snail-speed down the Ganga in Varanasi as dusk moves in and the ghats, draped in a mist, appear like a postcard from the edge of time. Tina Turner has been quiet, taking in the moving kaleidoscope of life on the ghats, and across on the other side of the river where boys are playing cricket and people gather in groups.

Sitting there, cross-legged on the upper deck of the boat, with young musicians playing an evening raag on the sarod and sitar, she looks quite like an ancient Saharan queen with her high cheek-bones and golden brown skin, a skin that has a strange glow, even in the evening light. There is something ageless about her, like the river. Her sixty-three years have barely marked their passage on her. And she looks much tinier and fragile than she does in her performances when she is energy incarnate, with a voice that comes from somewhere very deep.

Neither has her troubled life -- childhood poverty and a turbulent marriage and messy divorce -- visibly marked her. Midway through the journey, she says, almost in a whisper, "For me this is like a movie." It is not a casual, facetious remark. The Zurich-based American pop diva and actress believes that the best way to understand India is to look at it as if she were watching a movie. "It is like a period film, the way we were, and people are living their lives the way we did, but back in time."

Well, she is going to be going backwards and forwards in time herself. Tina Turner has come here on a recce mission for a film Ismail Merchant will direct later this year on. And the film, as Merchant explains it, is about Shakti and the power of women. "The only way to restore the world today is through Shakti. It is universal and there is a connection between the past, present and future. Who else could play Shakti but Tina?" says Merchant. Excerpts from an exclusive interview:

On expectations from India

: I had no expectations before coming here. I just had some material that Ismail Merchant had sent me, and some documentaries that I had seen. I expected more tradition, but it is so Western too. I see what the British did and the impact of it. India took what it was comfortable with. It proved a good way to get closer to modernization. The ones who are well here are well; the others, they are just living their lives.

First I saw was what looked like suffering. Delhi came as a shock. There were so many people, and oh, the traffic. But then I said to myself, wait a minute, OK, I see what is happening. It is living back in time. Though I have to add there is no reason for it to be as bad as it is. There is so much possibility, given a chance. Investors could rebuild things. There is so much talent and skills here, and people want a better life. We were like that once. It was a tough life. Martin Luther King said it can be done and it was. In there. The queens were up there in their howdahs. They never had their feet on the ground, but those below did. It is the same here, it is the elite on top, and the others must want more.

On the third day in India, I realized people were not suffering as much as I thought. I told myself I like it here. I study the visual aspects. There’s peace here, there could be more, of course.. I am hopeful when I look at the young kids coming out of schools -- kids in their uniforms. Something’s got to change. I sense this, I watch faces. The faces are good.

It is easier to understand what one sees if you see it like a movie, a period movie. This is the way some people did live in the past. Movies are movies: they take you back in time, and how it still is for some. It takes an older person to perceive this, to experience this. I am going to tell my friends that they need to see this. 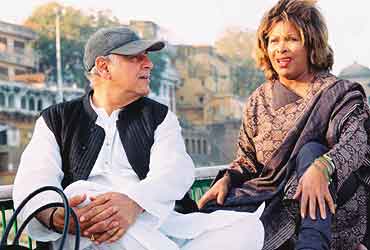 Flashback to her own life: I grew up in the south, poor-- on rock dirt roads. A bit like what I see here. In Tennessee where I grew up, there were animals, farms, wagons, mules. My parents worked the ground. I would not say that we were poor -- poor, as some of what I see here. We had a house, there was a place to stay. But there was so much dust. We washed at night before going to bed. It was tough for my mother. There was my mother, my sister and some cousins with us. We had no facilities. We had to use a wash pan. I don’t like to dwell on the past.

But the more I saw here, the more I realized that there was something I could relate to. Take away all the cars and the bikes, take it all away and you are very close to a time in my own life. You know you have to walk around to feel it. People stare at me in the streets. It’s like when I was a young girl and I went up North, and I would look at the people there. They all spoke so differently. It would be the same for these people going to the city from their villages. They must be seeing me the way I saw those people in the city.

As a child my grandmother used to tell us stories about the dead and the mystical. I was always attracted to science fiction movies. I heard stories from my mother’s mother who was an American Indian. She was spiritual, although she did not go to church, but she had the hum. She used to tell me stories of the rivers. My father’s mother was black I was told stories by that grandmother, basically stories to frighten you to go to bed. She was a Baptist, a churchwoman. It made sense later.

On preparing for this role:

I had not worked for four years. And then I was told about a year ago that Merchant Ivory were doing a film which had something to do with legends and goddesses. I said, yes, yes, yes. I was kind of moving round the subject. It was about Shakti and I said, yes, that sounds good. It sounded very visual and physical. It excited me, and now I am excited about being a dancer. I want to work on the training for this. I have been thinking about this film. I want to breathe in the Spiritual. I want to believe in all the myths and legends. I was brought up with all that and feel that I can step into that character. I had not given that much thought earlier to the legends of India, to the gods here. I have smaller statues at home though… Now that I am here I have to come up with another concept. India is giving me another perception. To step into the role, to prepare the self for which I need stronger, focused meditation.

On Buddhism and faith:

I am a practicing Buddhist. I have been for 25 years. The chants help, and I am working on it. And it helps in life. You worship more here. Sometimes we need help from a god. You take your problems to a god, but what you really need is for the god to take you to the inside of you. It takes a belief system to get you to that place within. In Buddhism there are words you can say…as you say the words with rhythm, the conscious tells the subconscious. You need an idol for focus, that god gets you to that place. There is no just one way. I take from all that is around me. Buddhism has got me that far, to what is good. I relate to and respect all. I know the difference between black magic and white magic. I believe in prayer and in strong belief.

On what a goddess means to her: For me, the goddess is the female of God. She is powerful, if different. In the USA, there is no female equivalent to god. But I believe we have a higher level of mentality within us, but we have to use the power in the right way. For me the goddess is positive. She has strength and the ability to help. I am attracted to myths. My role in Ismail’s film interests me. I want to know what this kind of goddess will project, the scientific aspect, the new female. I believe in cosmic energy of men and women. I want to know what the difference between the essence of a man and woman is. A woman gives life, is. I am sure there is a scientific explanation for the difference. It is not a superstition. Looked at scientifically, it could be something. I feel what is in a woman is coming from the earth. It is the union of creation. I am coming from an intuitive place. My parents separated when I was younger. I worked with intuition. Basically I was alone, so I was more centered.

Taking in Indian music: I am still trying to understand the music here. What we heard last night was the rhythm of the soul and not just the words. Which is what I felt when I heard the old man humming. It is not melody in scale. It comes from a place within. This is when there are no words. You have the hum -- it’s humming from the soul. There is no end to it and you can go on as long as you want, there is no end because there is no structure.

On her music and her personalized hum:

You know about the music of the soul. I got mine done through astrology. You get it from the birth date and then through numerology. And round that you find the hum of the soul. Then you do the humming. I had mine done nine years ago, but I didn’t keep it up. I was going through my divorce, and it was the hardest part of my life. I lost what was given to me from the numbers. Sometimes, lying in bed it is still there, not as concentrated as it was, but it comes from that place.

On the Taj Mahal:

I had heard so much about it, about the love story. The guide made us keep our eyes closed so that the first sight would be the full view. It looked like a huge crystal ...and the light! -  for me it was like a lotus in a swamp. I had a surge of emotional feeling, of awe. It is a tomb, yet for me it was that magic of the stone. The Taj Mahal just sits there -- like a huge diamond. It was the magic of crystal. For the people, it is about the queen -- OK, it is story about love. But what is still standing there is its strength and beauty. Even if there had been no story. Like if someone, say in elementary language, describes this beautiful white house, as a magical place.


An edited version of this encounter appears in the print magazine.

The Hum Of Holy Breath