Debutant Bejoy Nambiar, working with a plot that has traces of Anurag Kashyap’s unreleased film Paanch, directs this thriller with a deftness of touch. 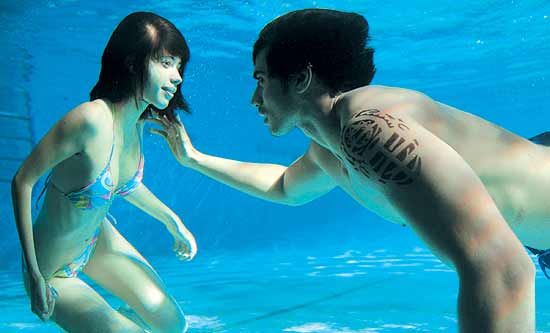 Hindi film directors have developed a penchant for slickness that, at times, is even made to stand in for the lack of a coherent script. Game and Dum Maro Dum come to mind. Shaitan, thankfully, doesn’t fall into that trap, unfolding stylishly but staying clear of overindulgence, backed by an energetic narrative and imaginative visuals. Debutant Bejoy Nambiar, working with a plot that has traces of Anurag Kashyap’s unreleased film Paanch, directs this thriller with a deftness of touch.

Eighteen-year-old Amrita ‘Amy’ Jaishankar (Kalki Koechlin), with an intense childhood trauma yet to come to terms with, moves to Mumbai from LA with her wealthy NRI father (Rajit Kapoor) and stepmother. She’s falls in with the brats-on-the-block, KC (Gulshan Devaiya), Dash (Shiv Pandit), Tanya (Kirti Kulhari) and Zubin (Neil Bhoopalam), with whom she parties hard, cocaine-style, till a fatal accident shakes the lot out of their reverie. They plot a staged kidnapping to ransom a willing Amy to get out of the mess. But things go awry, and they’re haunted by the blood on their hands, their own demonic streaks, and by hotheaded cop Arvind Mathur (Rajeev Khandelwal in superb form).

Nambiar liberally uses devices like slo-mo sequences and flashbacks to lift the movie from its moody central track. Watch out for a humorous flashback within a flashback (that the protagonists use as inspiration) featuring a cameo by Udaan’s Rajat Barmecha, who stages his brother’s kidnapping to raise money for drugs. Or the lovely parallel track that has Khandelwal sorting out marital issues with his wife, played by Sheetal Menon, who emotes without a word spoken. The ensemble cast is refreshing. Shaitan also benefits from a terrific soundtrack, with gems like the remixed Khoya Khoya Chand that plays out to a shootout sequence. If it has a flaw, it’s in making its protagonists look too naive, and exposing plotholes in doing so: the five friends plan details of the staged kidnapping in minutiae, but somehow overlook obvious consequences like police involvement, a media frenzy, or how suspicious it’d be if they all disappeared together.