Setu On The Potomac

The Ramayana gets a very American makeover. Does the flavour survive the melting pot?

It is Ramayana lite, a short and sassy interpretation of the ancient epic, which transports instantly, teaches variously and satisfies ultimately. Can the whole wisdom and vastness of the Ramayana be distilled into a two-hour, 15-minute play staged on a minimalist set inside a small theatre by a US theatre company? The answer is a most resounding ‘Yes’.

The Constellation Theater Company, a relatively new entrant on the scene but already an award-winner, has created a distinct buzz with The Ramayana, drawing mainstream American audiences and enjoying the benefits of the prevalent “India is cool” mood. The play has sold out on its second run, the critics are wowed and director Allison Stockman can’t stop smiling. Vivid, energetic and funny, it is a dramatic burst of an adventure, different but accessible. No time to catch your breath as action piles upon action, divinity collides with the dark side and a monkey army performs its duty. Sugreeva and his band even break into rap, leaping into the present. But the production’s periodic one-liner wisdom keeps audiences rooted in the experience of watching something sacred. 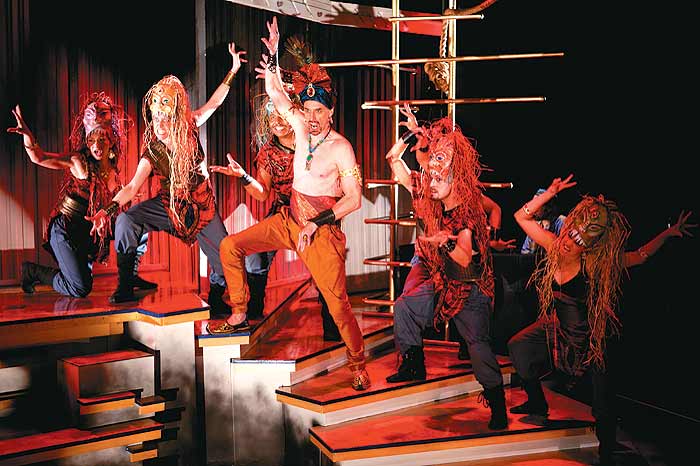 Ravana and his fellow demons. (Photograph by Scott Suchman)