Setting Sail On The High C 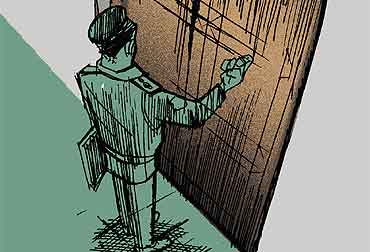 outlookindia.com
-0001-11-30T00:00:00+0553
Are officers and men of the army, navy and air force becoming more litigious than ever before? Until a few years ago, civilian courts rarely entertained petitions from personnel of the defence forces: if they did, it was only in extreme cases. But things seem to have changed at the turn of the century. In the last three years alone, there have been more than 6,300 cases of defence personnel approaching civil courts for justice. A fact that the Union ministry of defence readily confirms.

According to a Delhi High Court official, the capital alone has close to 2,000 cases listed in various stages of hearing. "These days it is not uncommon to see defence personnel in uniform sitting through hearings," he says. The courts too seem willing to lend them a sympathetic ear.

One of the first such cases to hit the headlines was filed by Vice-Admiral Harinder Singh in the Calcutta High Court in 1998. In his petition, Singh alleged that the then naval chief, Admiral Vishnu Bhagwat, had given him a negative Annual Confidential Report (ACR) because he was anti-Sikh. The court held it was for the defence ministry to sort out the issue.

And then, despite the Appointments Committee of the Cabinet (ACC) approving his candidacy, Bhagwat refused to promote Singh as the deputy chief of naval staff, citing strong personal reasons. This left the government embarrassed and led, for the first time ever, to the sacking of a navy chief. As rear admiral, Bhagwat too had moved the courts in ’90 over an appointment issue. "So, what’s wrong with militarymen approaching the courts?" he asks. "It’s a last resort. That step’s taken when all else has failed."

Governed by the Army Act of 1950 (which in turn was culled almost wholly from the Indian Army Act introduced by the British), military law is fast becoming an anachronism. Statutory complaints are filed under section 27 of the Army Act, and the Air Force and Navy Acts (which are replicas of the Army Act), and are looked into by the army, air and navy headquarters or by the military courts. But as Kadyan says, "The military law was designed by the British to suit the needs of an occupying army. Therefore, some provisions of the army’s legal system need to be reviewed."

For, in its present form, the military-legal system is perceived to be outdated. The punishments or convictions are swift and harsh and often summary. Also, unlike in the US, UK and France, Indian defence personnel are deprived of the crucial right of credible appeal that lies at the heart of any legal system. In the absence of this, armed forces personnel have no option but to move civilian courts.

Says Brig R.N. Awasthi, among a growing number of retired officers practising law, "The method of inquiry has to change, harsher enactments need to be reviewed and brought in line to protect the fundamental rights of service personnel." For example, a convicted officer—under current rules—is allowed to go in appeal, but ironically before the same officer who had passed the judgement in the first place.

Times too have changed. "When I joined the army in 1952," says Lt Gen (retd) Gorakhnath, "there were about 8,000 people in the officer cadre. It meant that someone like me—without anyone to put in a word for nor hailing from the so-called martial races—could reach senior levels in the army. Today with 40,000 officers in a cadre, it is rather difficult." With a sharpening pyramidal structure where reaching top levels is difficult, heartburn and humiliation are natural corollaries.

Then, there’s political interference. Rear Admiral (retd) H.C. Malhotra cites instances of officers using political patronage to leverage out-of-turn promotions, and vying for foreign postings—in short everything that the civil bureaucracy is notorious for. As a result, a majority of the cases before civilian courts deal with service matters and only a few with convictions by court martial for criminal offences.

Points out senior lawyer R.K. Anand, who’s taken up numerous cases on behalf of service personnel: "A question mark’s been raised about appointments at very senior levels in the defence forces. I’ve fought—and won—a dozen cases of promotions at seniormost levels and the lapses committed by some civilian bureaucrats in the defence ministry on promotions are quite outrageous—though unknown to the public."

Some in the military do not take kindly to this intervention by civilian courts. Gorakhnath justifies it, saying, "With a number of scams hitting the services, particularly the army, their lily-white reputation has taken a beating, giving courts perhaps the idea that there is need for intervention." But Malhotra thinks that redressal has to come from within. "It is a fact that in the absence of it, many people are approaching civil courts. What is also a fact is that many of these cases are fake," he says. What everyone is agreed about is that the system needs to change.

And successive governments have been seized of this need though they haven’t done much about it. According to defence ministry officials, a detailed plan to set up an Armed Services Tribunal, on the lines of the Central Administrative Tribunal, has been drawn up to be presented before the Union cabinet for approval. The tribunal is proposed to be a three-member body, comprising the army’s judge advocate general, a retired Supreme Court or high court judge and a bureaucrat.

According to Lt Gen (retd) V.K. Singh, there is another proposal lying in limbo: the setting up of two kinds of courts—one that deals with service and administrative matters and another with crimes. "I believe if two separate courts are set up, like in some western countries, servicemen will gladly approach these instead of civil courts," he says.

However, till some form of credible redressal is put in place, disgruntled officers and men will continue to knock on civilian court doors. And every time they do, the credibility of the services will suffer a blow. As one serving officer put it, "When a general fights his battle in an open court, what kind of message does it send to his colleagues and men?"