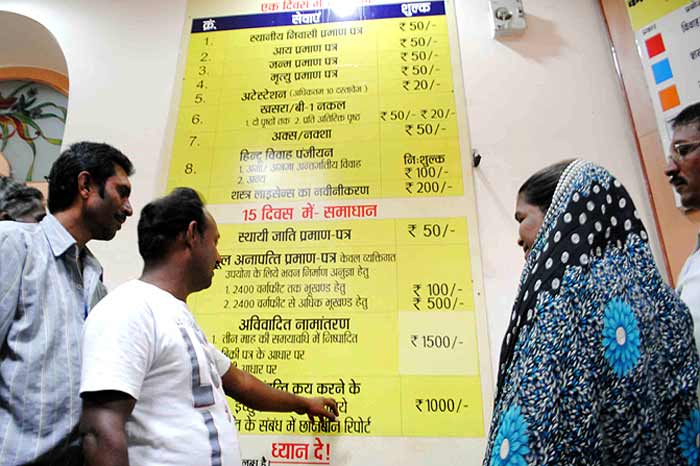 Three months ago in Madhya Pradesh, farmer Devi Prasad Kushwa trudged along to the village patwari’s office in Sehore, 43 km from Bhopal, to get his cultivation record or khasra. The government official stalled the delivery of khasra and then stalled some more. In another time, Kushwa would have had to quietly stomach the delay, go back and come again another day, only to repeat the cycle again. But under a new legislation enacted by the state assuring time-bound delivery of public services, he made a three-tiered appeal. Result: not only did the patwari give Kushwa the document last month but he was also fined Rs 5,000.

Kushwa’s sense of empowerment has come via the Right to Services (RTS), where citizens no longer have to accept the babu’s snail’s pace of work, with state after state introducing the legislation to make its officials accountable—all this even before the Lokpal bill becomes a reality. Fines like the one the Sehore patwari had to pay are instilling a sense of duty and fear. “Now everyone in the village,” says farmer Ramkumar Sahu, “knows they have a weapon to scare the officers if they delay delivery of services.”

Such anecdotes are aplenty in MP, the first among the 10 states to have notified RTS till now. From issuing birth, death and caste certificates to providing electricity and water connections or disconnection in a single day and registering land records and residence proof—the state has notified 52 services in one year with varying time-frames. Uttar Pradesh, Himachal Pradesh, Bihar, J&K, Delhi, Uttarakhand, Rajasthan, Punjab and Jharkhand have likewise notified a varying number of time-bound services.

MP, in fact, has set up a separate department to monitor progress and is setting up block-level hubs or lok seva kendras to reach the services to the masses. Similarly, ahead of passing the legislation, Kerala has tested the capacity of Akshaya Janaseva Kendras—originally set up to promote IT literacy—in two districts and is now ready to offer online public services at the panchayat level across the state. A visit to the public service departments in the state shows perceptible improvement in delivery, thanks to a weekly monitoring system.

Nripendra Misra, director, Public Interest Foundation, Delhi, is happy that the states are showing a strong political will to reform the standard of public services, identifying and addressing key concerns of the common man in accessing government services. They have sought to bring the “public” back into administration by providing a three-tier grievance redressal mechanism. Adds Manoj Rai of NGO PRIA, “It is good that states like MP are creating local support systems.” Officials there claim their system is delivering 99.9 per cent results. As for the 0.1 per cent default—by no means a small number as it means over one lakh people who have not gone in for appeal, either due to lack of awareness or wariness about the system—the state government has decided in favour of suo motu action by senior appellate officers. 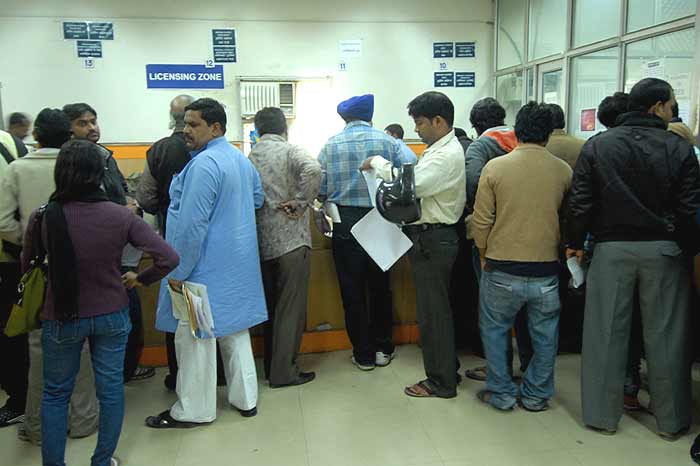 E-friended! An RTO office in New Delhi where driving licences are being issued. (Photograph by Tribhuvan Tiwari)

Be that as it may, the experts are not viewing these efforts uncritically. “Our survey,” says Misra, “shows that none of the states have so far set standards for judging delivery standards and service quality.” Rights activist Nikhil Dey says that while guaranteeing a few services, the system “explicitly leaves out others”. Talking about MP, PRIA’s Rai says, “Though the state has created positive vibes through onground facilitations (a PPP model like in Kerala), some lags exist. How the system responds remains to be seen.” For instance, imposing penalties ranging from Rs 250-5,000 is not easy as harassment has to be proved first.

In several states like Rajasthan, the system is yet to take off. Lack of awareness and infrastructure, particularly poor power supply, remains a big challenge in rural areas. In Bihar, students have been agitating lately due to delay in receipt of certificates owing to the tendency of the departments concerned to hold them till the last day of delivery. One reason for this, as Vishwa Ranjan, state in-charge of PRIA, points out, could be that the delivery institutions in Bihar don’t have the necessary capacity. Also, in case of complaints, seniors tend to protect the juniors in the absence of an independent grievances redressal cell.

Om Prakash Malik, president of the UP-based Sarvakhap Swarup Samiti, points to another major problem—of preventing people from paying bribes to get their work done fast. “We held a seminar recently and have written to different departments to shorten the service delivery process and time,” says Malik, from Shamli district. They have managed to reduce processing time with local banks, water and power departments.

Even as more states prepare to embark on the RTS road, two central legislations—the Citizen’s Right to Grievance Redress Bill, 2011, and Electronic Service Delivery Bill—are still being finalised and may soon supersede them. Misra thinks the proposed central legislation on citizen’s rights does not honour the federal character of the country and will encourage grievances, not services.

The experts also differ on the e-mode of service delivery the Centre favours. Such a model is already in place in Delhi; Bihar and MP are heading in that direction. It does help minimise corruption, but as M.R. Madhavan of PRS Legislative Research says, things like a new driving licence, delivery of ration, healthcare and education, which should be part of a time-bound delivery system, can’t be done electronically. And the central legislation draft is focusing on online certificates, not on key public services. “Basically goods and services should be guaranteed under the Right to Services Act; the electronic service should only be a subset to it,” says Nikhil Dey.

The states are doing their bit, even if their efforts are far from perfect. The central bills will hopefully improve on rather than dilute them.

By Lola Nayar with K.S. Shaini in Bhopal