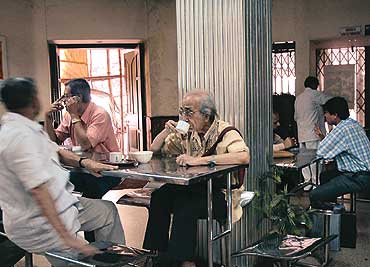 When the Coffee Board asked advertising agency JWT to do a campaign to popularise coffee in tea-drinking India in the 1940s, they came back instead with a proposal to set up a chain of coffee houses where people could sample a really great cup of coffee. And that’s the origin of Calcutta’s India Coffee House. Over the decades, its coffee has fuelled many a marathon intellectual discussion, involving everybody from Amartya Sen to Mrinal Sen to Aparna Sen. And in the process, the Coffee House has become so much part of Calcutta’s life that when threatened with closure, a public funeral procession was organised and the government was petitioned to save it. In fact, it’s such an institution that even Manna Dey has sung about it: "Coffee Houser shei adda ta ar nei" (The adda we used to have at the Coffee House is now gone). Food plays a somewhat secondary role to food-for-thought here, but long-time favourites are the mughlai paratha, mutton afghani, fish fry and kobiraj, a delicious cutlet wrapped in egg. The no-profit-no-loss prices, meanwhile, would give any Barista manager a nervous breakdown.