It was one of India's worst earthquakes. As the human loss is rendered into dry statistic, other disturbing questions loom. 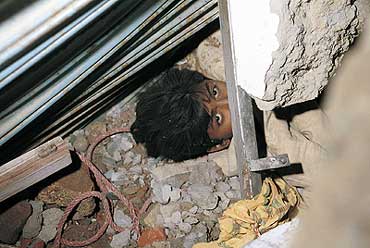 outlookindia.com
-0001-11-30T00:00:00+0553
It's often difficult to realise the true scale of disasters till they happen. By which time, invariably, it's too late. The story of the biggest earthquake (8.0 Richter) in 50 years, epicentred 20 km north-northeast of Bhuj, Gujarat, is best understood after a visit to Ahmedabad's five biggest hospitals. Overflowing with the dead and the dying, there's simply no limit on how many bodies are on the way. On Saturday night, the toll had already crossed 10,000 and the counting hadn't ended—it was certainly on its way past the toll of the Latur quake of September '93. If unofficial estimates, which put the toll at 20,000 is true, this could well be India's most destructive quake ever. Horror stories of death and destruction are pouring in from across Gujarat. No final estimates have been made, but officials peg the loss in monetary terms at thousands of crores. The economic clock, some say, has been set back by a decade.

Gujarat bore the brunt of the quake. Rajkot, Jamnagar, Surendranagar, Patan... all have reported fatalities and damage. Intervening rural areas also did not escape the fury of the earthquake. Rural Rajkot accounted for 150 deaths and over 1,000 injured. In Bhuj, 90 per cent of buildings have been affected (see Trauma of the Undead).

The horror stories of those 'fortunate' enough to not be killed run to a type. Keertibhai Shah in Ahmedabad's Fatehnagar locality was lazing around on a relaxed Republic Day morning when he saw his bed wobbling, his kitchen clanging and the TV set showing pictures at an angle never seen before. His last waking memory of that morning is of the ceiling fan falling on his head. Or take Mehmood Mustafa, a labourer from downtown Usmanpura, who, when he saw a multi-storeyed building crumble right before his eyes, leapt from his third-floor window. Mustafa is alive but has lost his legs.

Eyewitness accounts say that people basking in the sun were crushed under tonnes of concrete, which crushed passers-by and flattened cars. Amid the rubble that's all that remains of over 75 high-rise buildings in Ahmedabad, those alive are desperately searching for bodies around the clock. The whole town is literally out on the streets with no one willing return home until the end of '78 hours' when it is popularly believed the quake strikes again.

The once-busy and affluent Ahmedabad marketing complexes are deserted. Nobody wants to take a chance by entering any concrete structure. Car-owners have moved out into their cars, and the city landscape is dotted with tents. "It is better to face the cold than go back to the 10th storey," says Shakuntlaben Shah, a resident of Maninagar, who is crammed into a sleeping bag with her two children near an open space in the city's posh Sunrise Colony. All high-rise buildings have been vacated. But even as Ahmedabad municipality workers, volunteers, do-gooders, assorted ngos, the army, police and rss workers do their bit to keep the city afloat, there are several thousands still buried under collapsed buildings.

In the Shikhar complex in the residential Satellite area, a young engineer trapped under rubble kept calling on his cellphone, wailing for help. After nearly 10 hours, the phone went silent. In the same complex, Meena Bhai Patel had just stepped outside to go to the market when he saw an entire block of the building come down. Unluckily for him, his family was still inside. The night of this Republic Day is one none will forget. Men, women and children crying for help from under the collapsed steel and mortar heaps, aid workers and others trying frantically to remove the rubble with the help of too few bulldozers, with limited success.

As the day wore on, news of heavy casualties started pouring in not just from the capital but Surat, Rajkot, Surendranagar, Jamnagar, Banskantha, Junagadh, Navsari, Mehsana... And it wasn't until quite late that the horrors of Bhuj came to light, either through the help of some enterprising journalists who managed to fly in there or through the vast network of local newspapers, whose stringers narrated the tales of catastrophe and death. In effect, the Kutch area of Gujarat remained cut off from the rest of the country for a day.

There was literally no official word until it became clear that the damages were on an unprecedented scale. While speculative estimates put fatalities over 20,000, the state government spokesman, U.B. Parmar, put the toll at around 2,800 till Saturday afternoon. But he was careful to add a caveat: "The toll could well be higher."

It is difficult to predict or prevent a natural calamity, but when such an event occurs, it raises questions about the State's disaster management policy. This was again evident in the aftermath of the quake. The authorities were almost numbed into inaction. Leaders who dashed to Gujarat had to face public ire. Home minister L.K. Advani had a hard time trying to enter the affected areas of his home constituency as local vigilante groups refused to entertain politicians and rebuffed media teams asking questions to people in deep trauma. Even Congress leader Ahmed Patel's efforts to organise Youth Congress volunteers was seen as mere gimmickry.

The rescue and relief operations has also come in for attack. The state machinery, caught up with Republic Day celebrations, took some time to get its act together. In the first few hours, as reports from Mehsana, Sabarkantha, the border district of Banskantha and other areas suggest, it was only with the courageous individual efforts that some victims were rescued. In Ahmedabad, it was practically evening before the municipal cranes were put into action. It took over 10 hours to get the army involved, by which time several lives were already lost. But by Saturday, the armed forces had launched its biggest ever disaster operations, deploying over 4,700 personnel, 40 aircraft, helicopters and naval ships.

Earthquakes are not new in Gujarat. According to seismological records, quakes of various magnitudes have been experienced for the last 100 years or so in Bhuj, Ahmedabad, Kutch, Khera, Bhavnagar, Surendranagar and other areas. But quakes of small magnitude have been repeatedly ignored. According to an Archaeological Survey of India report of 1970, several districts like Kutch, Dwarka, Rajkot, Valsad, Kheda and even Ahmedabad form part of an active seismic zone of the highest damage probability, and adequate precautionary steps were recommended, but not followed.

According to Deepesh Sinha of the Disaster Mitigation Group, an Ahmedabad-based ngo, several proposals have been ignored. In a detailed risk summary prepared by their affiliate, the US Federal Emergency Management Agency, several tests on the faultlines, profile of the soil and so on had been suggested to lessen a quake's impact. The report also suggested an assessment of quake risk on dam inundation, fires, hazardous material spills and other related issues. The director of the group, Mihir Bhatt, had in November written to the central government in the aftermath of Latur's earthquake, calling for the setting up of a National Commission for Disasters and Emergencies, found in most developed countries, which does preventive analysis, something sorely lacking in India.

That there has been no disaster management becomes evident. At Ahmedabad's Seth Vadilal Sarabhai Hospital, one of the biggest in the state, doctors and surgeons say preventive steps have been completely ignored. "I cannot do much with a seriously injured patient. To save lives, the time between the accident and admission to hospital is crucial," says Dr Neeraj Shah, a consulting surgeon, waging an uphill battle in trying to salvage something of the never-ending queue of casualties.

There seems to be something of a pattern in damages to buildings. Quite remarkably, the older buildings—not just in the capital but Rajkot, Jamnagar and Anand—are quite intact. What have come crashing down are relatively new multi-storeyed buildings, much advertised but mostly constructed with scant regard for building laws. In badly-hit Ahmedabad, the maximum damage has been caused in Satellite, Ambavadi and Maninagar areas—colonies with the largest number of high-rises. Says Chirag Patel, a member of the Institute of Engineers: "Though it is still early days, I can safely say that our architectural paradigms need a relook. The modern trend of skyscrapers suit everyone but are they safe, particularly in areas described as 'tectonically resurgent'?"

And multi-storeyed buildings are not the only ones affected. In Ahmedabad alone, some historic structures like the 15th century marvel, Jhoomtey Minar (Shaking Minarets) collapsed. According to one early estimate drawn up by the state government, several crucial bridges in the state connecting districts have been damaged beyond repair.

What could be the other fallout is the damage to the Narmada Dam. State government authorities say reports of damage to the dam are untrue. "We have received no information of this kind," says state spokesman Parmar. The other scare: what would happen to the big corporate units in Gujarat, in one of the country's most advanced industrial states? Reliance Industries spokesman Yogesh Desai says their refinery complexes in Jamnagar and Hazira are safe but the possibility of other plants located near Bhuj, belonging to the Tatas and Essar, being hit remained a possibility. Defence officials played down reports that the airbases at Bhuj and Nalia had been damaged.

The current earthquake has brought back memories of the last time that such an occurrence took place. More than 700 people were estimated killed in Kutch in 1956. Experts now recall the prophetic words of Prof R.V. Karanth of Baroda's MS University when he emphasised last year that the factors which trigger off quakes in the Himalayan region are also present in the Kutch region. Sadly, no precautionary measures were undertaken.

A Quiet Riot On the Radio