Delhi draws a curtain on slums and beggars 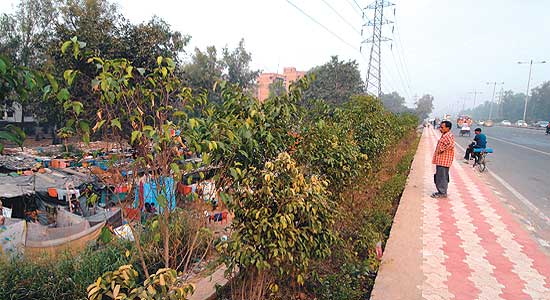 "Garibi Hatao" was Indira Gandhi's rallying cry in 1971. But as the Commonwealth Games  grow menacingly closer, the government would rather cry out "Garib Hatao, Gandagi Chhipao". Lest shanties and dirt get in the way of a picturesque setting, the Delhi government is on an overdrive to hide the dirt and chase out the poor. The Public Works Department has begun the task of planting bamboo and other fast-growing trees to cover up unpleasant sights across the city. One of the first such locations to be hidden away from a highway that will be used by visitors for the Commonwealth Games is Nehru Camp, a 20-year-old slum that is home to a few thousand people.

The government is also hiding an enormous drain along the road to the Yamuna Sports Complex, one of the games venues, with a tree cover. "We have to upgrade the city for the games but with limited time and resources there is not much we can do. A green cover unlike a wall, on the other hand, benefits everybody," says Kewal Sharma, principal secretary with the PWD.

"The government has no respect for the poor," says Rahman Khan, a resident of the slum in east Delhi and a watchman. "What the government is hiding is its failure. It can instead give us low-cost houses for which we can pay, let's say, Rs 500 each month," he adds. But most residents of this slum, never sure if their homes are going to survive another day, welcome the move to hide them. "We are always afraid of being hounded out. Being hidden is better than living for perpetuity with fear," says Dharam Raj, a tailor who lives in the slum. About two years ago, sections of Nehru Camp were broken to make room for widening the highway.

It’s not just slums and drains, even beggars, the homeless, and just about anyone bedraggled are being rounded up from across the city. Several hundreds of them have been confined to 12 beggar homes located on the city’s peripheries. Two months ago, Shobha Kale, her sister, and her niece – residents of a traffic roundabout near Pusa Road – were accused of begging and hauled off to the women’s beggar home in Tihar Jail’s Nirmal Chaya block. Recalls Shobha, “We were in pitch darkness, shut in with 25 women. Many were half-naked crazies who tore at their hair and tried to bite us.”

In January earlier this year, the Delhi government’s department of social welfare prepared a time-bound action plan with “physical targets” – in other words, number of beggars to be caught. An RTI application filed by the Housing and Land Rights Network found out that the government had devised a three-pronged approach: a media campaign cautioning citizens not to patronise beggars, putting mobile courts on patrol at tourist spots and intersections that traffic police had identified as beggars’ haunts, and beefing up these ‘anti-begging squads’ with police protection.

Many beggars, scared of being persecuted, are ending up in regions around the national capital region, such as Mathura.

The government campaign to chase beggars out of Delhi was described as a “crime against humanity” by Justice S Muralidhar of the Delhi High Court in October this year, in response to a PIL filed by activist Harsh Mander that sought to decriminalise begging. While there’s a lull in the round-ups, beggars can still be prosecuted under the Bombay Prevention of Beggary Act 1959. And people like Shobha Kale still languish in beggar’s homes, or get ejected out of this aspiring world-class city.

Sudhish Pachauri, a cultural critic and a professor of Hindi at Delhi University, blames this on the "vestiges of colonialism in us". "All what the government is doing is putting make-up on that will disappear in 24 hours. Not comfortable with our reality, we always want to appear the way they want us to see," he says. "Aren't there poor in other Commonwealth countries that the British plundered for so long?" Pachauri asks.

By Debarshi Dasgupta, Shruti Ravindran. A slightly shorter version of this appears in print.

Urbs Prima In Indus: A Paean