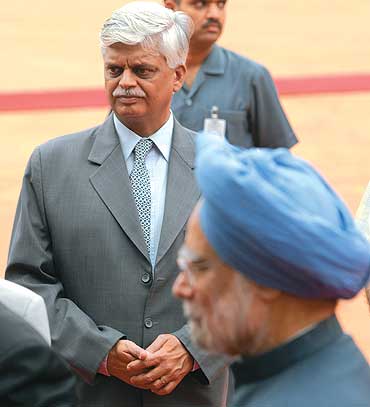 outlookindia.com
-0001-11-30T00:00:00+05:53
An academic-turned-journalist, Sanjaya Baru was not just the PM’s media advisor but also his confidant. In the four years he spent in the job, Baru had the unenviable—and often frustrating—task of projecting a man he personally admired in such a way that he didn’t overshadow Sonia Gandhi. The PM knows his limitations; Baru often crossed that line, earning the wrath of Congressmen and Left alike—the latter whenever he leaked stories to the press about differences within Left ranks on economic liberalisation.

Baru’s finest hour was perhaps when he gave Dr Singh an image makeover. In 2007, when the PM was going through some of the most difficult moments of his tenure, trying to push an obstinate Left into supporting the Indo-US deal, Baru persuaded him to go public. The result: the PM, in an interview to a Calcutta daily, dared the Left to withdraw support. They did, precipitating a crisis, but it made the PM look muscular. It was Baru again who backed the PM to rope in the Samajwadi Party, whose 39 MPs ensured the UPA government lasts its full course.