A great reporter, Nayar is also a regular flouter of objectivity, and a prime circulator of bogus, juicy gossip 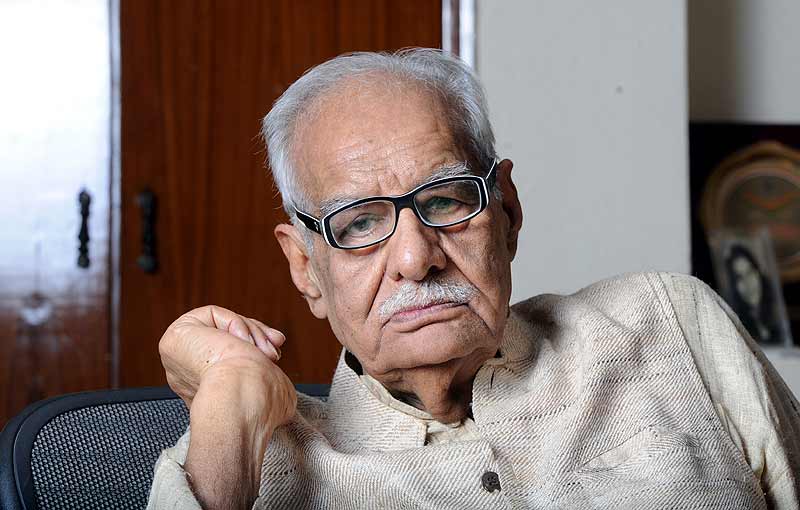 Undoubtedly, it could be granted, Kuldip Nayar is India’s most well-known journalist, and also a widely syndicated columnist. Just as the Beyond The Lines dust-jacket claims.

Equally undoubtedly, KN can be credited with two innovations. He was perhaps the first to experiment with a practice that later came to be known as “embedded journalism”. He earned his professional spurs as the government’s designated media-minder. As a PIB man, he was attached first to Govind Ballabh Pant and later to Lal Bahadur Shastri. Then, he becomes, at least in his own eyes, an intrepid journalist, though continuing to advise Shastri on image-building even after joining UNI. “Unofficially, I was still looking after his publicity,” notes Nayar. With charming innocence, he recalls how his reports helped tilt the scales in Shastri’s favour in the post-Nehru succession struggle. The thought of a conflict of interest doesn’t nag him. Later, during V.P. Singh’s short-lived innings as PM, when he is offered a diplomatic assignment, Nayar pauses for a second—“as a journalist, it would be odd to become part of the establishment”—before facilely resolving the conflict.

Beyond The Lines is a candid account of how Nayar meddled in the anti-Indira Gandhi manoeuvres throughout her prime ministerial days. Disregarding the journalist’s obligation of detachment and distance, he plunges into the Janata Party’s sordid intrigues. The dramatis personae in the Niira Radia tapes controversy have been reviled for much less.

Nayar sahib has another achievement to his credit: he fathered the genre of gossip journalism in India. He first displayed his talent for dressing up gossip as inside journalism in his book, India: The Critical years (1971). Since it was blatantly, fashionably anti-Indira Gandhi, he was never questioned for dishing out the loosest of bazaar talk as “inside information”. That style became a saleable asset. Beyond The Lines is strewn with wonderfully gossipy tit-bits. A juicy one: “Air India’s flights would carry Nehru’s daily letter, which the high commission dutifully delivered to Lady Mountbatten and daily collected her reply and forwarded it to Nehru. Nehru took officials to task whenever her letter was delayed.” A ‘love’ letter a day? Really?

Kuldip Nayar’s self-portrait buries firmly and deeply the notion of “objective journalism”. From being an admirer, advisor and confidant of Shastri, he effortlessly settled into an unthinking animus against Indira Gandhi, an antipathy later extended to her family. During the great Congress divide in 1969, Nayar becomes an unquestioning partisan of the party bosses and is embittered about Indira Gandhi outfoxing them. This bitterness sours his journalism. He becomes an anti-Indira pamphleteer. Then, during the Emergency, he is put behind bars; the prejudice against the Nehru-Gandhi family is now cast in stone.

Nayar sahib has no pretensions of being an academic or a literary buff. He acknowledges very early in his career he was “told that I did not know how to write, a stigma that has hounded me throughout my journalistic career”. Yet, there is absolutely no denying that Nayar was an exceptional reporter, with the keenest nose for news. He made up for his pedestrian penmanship by notching up scoop after scoop, an achievement any newsperson can be proud of. He is very readable, at least till the V.P. Singh innings, after which his access, reach and sources seemed to have gradually depleted.

Journalists are relied upon to provide the first draft of history. Beyond The Lines is a treasure-trove. The only thing a student of history can complain about is that many gold nuggets are thrown in without any concern for source, date or evidence. Though unschooled in the historian’s craft, Nayar is well-tutored in realpolitik’s unelevating ways. But the book loses value as a source to historians as there is no distinction between hearsay, 22-carat gossip and an insider’s authoritative observation/evidence.

Yet, by now, Nayar sahib has acquired the gravitas and the stature to feel he can rebuke younger generations of journalists for writing “one-sided versions of events”, and to admonish them that “news is meant to be objective, fair and neutral” and to remind all of us that freedom of press is “a moral precept”. Amen.

(A senior journalist, Harish Khare is a former media advisor to the PM)