Science Of The Times

IITs continue to rule. In medicine too, the top ranks are not new. The growing number of private institutes in the list is the surprise. 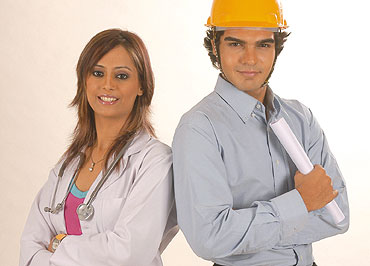 outlookindia.com
-0001-11-30T00:00:00+0553
New career options may have sprung up in the past few years, but getting a seat in an engineering or medical college is still a coveted dream for students and parents. Each year, lakhs of students passing out of school queue up to sit for entrance examinations, scramble to find out where they can get in on the basis of merit or quota, and pressure their parents to cough up the huge fees.

But selecting the best college is not easy. At present, there are 1,346 engineering colleges approved by the All India Council of Technical Education (AICTE), with a seat capacity of 4,40,000. Then there are 242 medical colleges approved by Medical Council of India (MCI) with an annual intake of 25,000 students. Moreover, not much information is available about most of them, except for the known institutes like the IITs, AIIMSs, MAMC and BITS. Most students have little idea about the quality of the plethora of private colleges that have mushroomed over the past decade or so in the southern and western states. Students and parents go by word of mouth to decide which college to join.

The final rankings were largely along expected lines. The IITs—Kanpur, Kharagpur, Bombay, Madras and Delhi—comprise the top five engineering colleges. AIIMS, CMC and AFMC are the top three among medical institutes. The good news is that several of such institutes have the potential to become world class. They have the ingredients to compete with the best in the world. More importantly, many of the private colleges figure in the Outlook-Cfore list; there are many privately-owned engineering institutes in the 50-100 ranking. 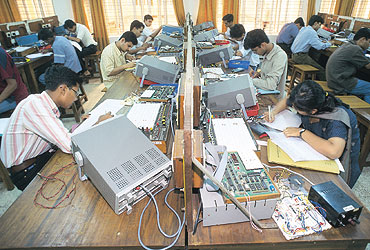 Students working at a laboratory in IIT, Kharagpur

India’s engineering colleges can be broadly segmented as either government-aided autonomous colleges, university colleges or private institutes. The latter category can be further segmented as deemed universities, university-affiliated or autonomous. All private colleges have to be managed by non-profit organisations—a trust or a society. Although the first government college was set up in 1847 in Roorkee, the modern era of high-quality technical education started with the setting up of IIT Kharagpur in 1951. A number of regional engineering colleges or RECS (now called National Institutes of Technology, or NITS) followed. At present, there are eight IITs and 18 NITS, and all of them—except NIT Silchar and NIT Srinagar—figure in our list. Set up in the late 1990s, the Indian Institutes of Information Technology (IIITS) are the latest additions to the growing number of engineering colleges catering to the ever-growing demand of quality manpower by the booming IT/ITES sector. The private sector entered the fray in the early ’50s in Karnataka—Maharashtra, Tamil Nadu and Andhra Pradesh allowed private players in the ’80s.

Low entry barriers, lack of effective regulatory mechanisms, and the growing demand for technical/professional courses led to a proliferation of private engineering colleges. Reservations for scheduled castes, scheduled tribes and other backward classes in the southern states further fuelled the growth momentum, and the trend peaked in the ’90s. Today, Tamil Nadu has the maximum number of colleges (254), followed by Andhra Pradesh (236), Maharashtra (155) and Karnataka (118). In fact, these four states account for 57 per cent of all the engineering colleges in India.

But numbers don’t logically translate into quality education. In Andhra Pradesh, for example, less than 20 institutes have good faculty or quality laboratories. Of the 80,000 seats in Tamil Nadu, over 21,000 remained vacant last year as students were not sufficiently enthused by several colleges. In other states too, few colleges in the private sector are disciplined enough to plough back the surpluses generated to improve the academic standards. The quality of education in many university colleges has also deteriorated over the years because of bureaucratic bottlenecks. Despite such obstacles, a few colleges like Anna University in Chennai, and Jadavpur University and Bengal University in the east have managed to retain their edge.

What’s worse, the research environment is rather impoverished in most of the country’s institutes. Even in prestigious colleges like the IITs, there’s a lack of research interface with the industry. Industry interface in our institutes is synonymous with summer projects that students undertake. The country’s small and medium enterprises could have benefited greatly if this interface had been nurtured. In terms of publications in reputed international journals or patents, the contribution of the current faculty members is rather meagre. No wonder, none of the IITs figure in the top 100 in global rankings. In other words, most of them continue to be teaching colleges; they only disseminate existing knowledge, they are not proactive enough to create new skill sets.

The technical institutes have also not shown much willingness to do research in pedagogic processes in order to make dissemination of knowledge more effective and generate interest in learning. Teaching is more theoretical than experiential. The pedagogic systems and processes test the ability to retain information rather than to encourage its analysis, synthesis and creative application. This is contrary to new-age expectations. With the upgradation of the computer chip, memorising facts is no longer important, and most information is accessible at the click of a button. Today, it’s the ability to use information creatively which is valued more by modern-day organisations. Instead of leading this change in mindset, the Indian institutes have responded rather slowly to the external environment. 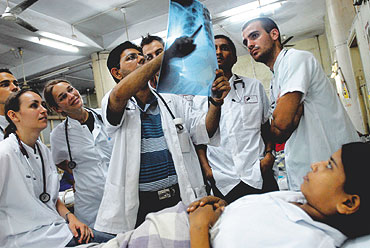 Unfortunately, the situation is the same in the case of medical colleges as far as intellectual capital, infrastructure and pedagogic processes are concerned. The first medical college, Calcutta Medical College, was set up in 1835, and the era of private ones began in 1953 with the setting up of Kasturba Medical College (Manipal). Of the 241 institutes, only 50-60 maintain minimum quality standards. The government colleges score over their private counterparts because of high clinical exposures that students get there. The reason: most government institutes have attached hospitals, which attract a number of patients seeking free treatment.

But the overall standards in government colleges are not too good either. A senior MCI officer admits that if they have to subject all the government colleges to the usual inspection drill, at least half of them will have to be shut down. Faculty shortage is acute and the MCI is able to approve only 8-10 of the 30 applications it receives every year to start a new college, because the existing ones are already unable to meet the faculty and infrastructure requirements. Recently, the regulatory body blacklisted 25 faculty members for simultaneously enrolling in more than one college.

So, the UPA government’s bid to give a hand to institutes of higher education should help. An increase in the number of seats in such colleges, including those offering professional courses, should yield results in the near future. But what’s more important is to set up an excellent regulatory mechanism, and open up the technical education segment.

(The author is director, Cfore.)