Having survived for ages, is 'the' Indian garment dying? 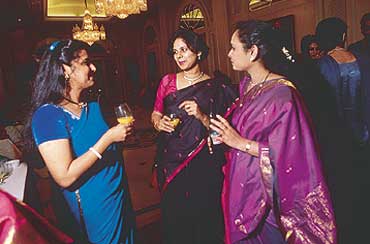 outlookindia.com
-0001-11-30T00:00:00+0553
Garry Newman, Australian consultant for the Westside chain of stores, knocked the bottom out of our last remaining cultural miracle the other day. The sari is dying, Newman declared to a gathering of fashion experts at the International Fashion Festival in Delhi last August. "It came as a shock," recalls Vinod Kaul of the Fashion Development Council of India, "as it shook our smug assumption that the sari will stay forever and never go the way of the kimono." Having survived adversaries ranging from Islamic invaders to European colonisers, gallantly fluttering in a virtual sea of westernisation sweeping across the rest of Asia, is the sari on its last six yards?

The signs, alas, are everywhere—from Calcutta to Ahmedabad, from Amritsar to Kochi, in small towns and metros but especially in what was till a few years ago its last bastion, south India. "The sari's demise is most visible in south India where women have been wearing it for so many hundreds of years," says Harmeet Bajaj of the National Institute of Fashion Technology in Delhi.

"It is not uncommon to go to any village and find the mother in a sari and the daughter in salwar kameez," says Laila Tyebji, co-founder of the handicrafts society, Dastkar. "The salwar kameez is now regarded even in south Indian villages as the dress of an educated, forward-looking woman."

"In the last few years, the demand for saris has been steadily declining," says Sameer Sharma, Andhra Pradesh Commissioner for Handloom and Textiles. The hardest hit by this sartorial revolution are the handloom weavers. Already reeling under the invasion of cheap, mill-made synthetic fabric, weavers blame the popularity of the salwar suit for wiping out their saris from the market. In a recent survey done by Hyderabad's National Institute of Fashion Technology (NIFT), for instance, 80 per cent of handloom weavers' societies wanted to stop weaving saris altogether. Hardly surprising, considering the huge stock of unsold saris lying in the godowns of the Andhra Pradesh State Handloom Weavers' Cooperative Society, better known as APCO, leading to a spate of suicides among weavers. Nalgonda district alone, famous for its Pochampally ikat saris, has an estimated Rs 20 crore worth of handloom saris languishing on the shelves of government shops and weavers' cooperatives.

Even mill-made saris are not doing too well. "Nearly half of the cloth shops in Andhra now sell salwar suits instead of saris," says V. Sreeramulu of NIFT's textile division, whose "hobby" is to stand on the streets of whatever place he happens to be in to see what people are wearing.

Similarly, in Karnataka and Tamil Nadu, more and more women are abandoning the sari they've worn unquestioningly for at least 2,000 years for the mobility and convenience of the salwar suit. Even in Kerala, where the sari is less than 100 years old, the new rage among the young is salwar suits made of the traditional, hand-woven cottons used previously as "half-saris".

In Hyderabad, while shops selling salwar suits have sprung up in nearly every neighbourhood market, sari shops are shrinking. "I want to get rid of all the saris in my shop at a discount and stock only salwar suits," says Simran Jaggi, owner of a boutique, Jagruti, in Banjara Hills. "Young people have switched over completely to western wear," she complains, "and the older ones only want salwar suits these days."

"It may not exactly be the death of the sari but it is certainly getting pushed into a niche market as a 'costume dress', more appropriate for weddings and other formal occasions than as daily wear," explains NIFT director N.V.R. Nathan."Women under 40 seldom wear a sari these days and those under 35, never."

"The switch from sari to salwar suits is not an aesthetic choice but one of mobility and function," points out textile historian Rita Kumar Chishti"Women who frequently have to use buses or other public transport cannot do so easily in saris." Agrees Konamaneni Lakshmi, 37, who works in Vysya Bank in Hyderabad. "All the women in my bank who are under 35 years of age have stopped wearing saris to work. Saris are so inconvenient to wear, especially if you drive a two-wheeler." Not that women in saris did not drive to work a few years ago on scooters; it's just that, as Lakshmi puts it, "with more women switching over from saris to salwar suits, nobody minds if you don't come to work in a sari". 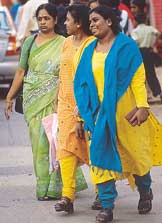 The social acceptability of the salwar suit is having an effect on older women as well. Lakshmi says she was reluctant to switch over from saris to salwar suits "because I was not accustomed to it". But her husband insisted, saying that he felt "odd" to go out with her when she wore a sari, especially when visiting friends or on trips to the cinema, club or shopping. One day, he came home with two readymade salwar suits and insisted that she wear them. Since then, Lakshmi has stopped wearing saris except to work ("I still feel shy to wear salwar kameez to work") or for a ceremonial occasion like a wedding. "For one thing," says Lakshmi, counting the many advantages of a salwar suit over a sari, "you can walk fast, take large strides, in a salwar suit." Besides, she says, "it takes less than half the time to wear it".

Cinema and TV may also be responsible for chipping away at the sari's image as a dress suitable for modern life, Chishti says. "There's a clear line between stars who wear saris and the younger lot who rarely wear saris unless it is a very formal occasion." Tyebji agrees: "Image-makers are mostly responsible for this trend. In TV ads, where most Indians pick up what's in and what's out, the only women in saris are the obedient bahu frying wafer-crisp puris, the saas demanding a Sani-fresh toilet or the plain girl with acne, BO and bad breath. The message is clear: only the dull, the dumb and the unsuccessful wear saris."

Hardly surprising then that even women who had unquestioningly embraced the six yards of fabric with their marriage vows are now flirting with the salwar suit. When Rajini Reddy married at the age of 21, it was understood that she would henceforth wear only saris. And so she did, until a couple of years ago. For Rajini, now 39, the temptation to step out of the conservative sari was neither its inconvenience nor the laundry costs (she pays her dhobi Rs 5 for ironing a sari, over double the rate he charges for a three-piece salwar suit). "It was the variety of salwar suits in the shops," she confesses. Bored by the sameness of the saris she felt obliged to wear, bombarded in every film and TV serial by images of women in salwar suits, with sari shops shrinking and with it, tailors to make the sari blouses (signs like this one in a flourishing tailor's establishment in Panjagutta, a Hyderabad locality, saying, "Due to shortage of labour, sari blouses cannot be undertaken" are not uncommon) and with salwar suit boutiques springing up almost overnight all over the city, it did not take long for Rajini to succumb to temptation. She got her chance when she went on a trip to Singapore. Rajini bought herself a new wardrobe of salwar suits on the pretext that they were easier to wash and wear and travel in than saris. When she returned from her two-week vacation, Rajini abandoned the sari—for daily wear, at any rate. 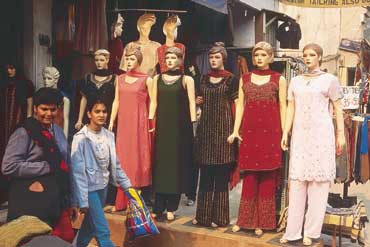 For years, we had prided ourselves on, to use Chishti's rather sentimental phrase, "the sari's capacity to reinterpret the cultural motif over and over again". But ironically, it was this very reinvention that may be leading to the sari's demise. Historians say the early sari had little resemblance to the present dress that goes by the same name.The sari of yore was little more than a cloth draped diaphanously over the lower half of the body, leaving the bosom bare. But each incursion from the North and the West added a fresh layer to the rudimentary dhoti, starting from the blouse and petticoat to the cumbersome modern sari invented in the nineteenth century to suit Victorian prudery. "A sari is the most uncomfortable dress to wear," complains paediatrician Asha Benkappa, who also teaches at the Bangalore Medical College.

One sign of the changing times is Fazal and Sons, a popular shop for saris on Commercial Street, Bangalore. But in the last few years, the shelf space for saris has shrunk to less than half a floor, the rest of the three-storeyed shop selling only salwar sets. In fact, Bangalore's jeans-clad generation, like their peers in Hyderabad and Chennai, are reinventing the concept of formal wear. "Young women like only western clothes. They wear salwar kameez for formal occasions like weddings," explains Dr Asha. "It gives them a chance to go ethnic." Since they can wear a bindi, flowers in the hair, bangles and mehndi with salwar kameez, they are saved the pain of wearing a sari even for formal occasions, she explains. Agrees Tyebji, "The post-independence woman, although she was willing to experiment with regional variations of dress, didn't want to give up her Indianness but the generation after her aspires to a different Westward-looking image."

Interestingly, in the pitched battle between western wear and traditional dress that the young are waging against their elders, the Islamic-inspired salwar suit is playing a piquant new role. "The salwar suit is providing a buffer zone against the powerful wave of westernisation," points out Chishti. This became evident a couple of years ago when Bangalore's Christ College imposed a new dress code on its students. Jeans and skirts were banned, girls were ordered to appear in college dressed only in salwar suits. But even a strict dress code may not be able to keep young women away from western wear. As Mohanjeet Grewal, a Paris-based designer, points out, "The salwar kameez is only the first step in the westernisation of our dress. It never stops with the salwar kameez, as you can see in our films."

However, die-hards like Tyebji insist that the sari will yet bounce back to life. "I think when the salwar kameez began to be sold in bulk, in markets like Lajpat Nagar, the trendy people rediscovered the sari as a fashion statement." Tyebji says the trend became perceptible in Dastkar a few years ago. "No one was buying our saris in the '90s and we had to shift to selling salwar suits. But a few years later, it resurfaced, this time as formal wear."

Fashion designers soon began to cash in on the trend, reinventing the sari as a hybrid dress with the navel-baring appeal of the ancient costume but with the silhouette and plunging necklines of western evening wear. Yves St Laurent once said that the only regret in his life was that he hadn't invented the sari. His Indian counterparts don't share his regret. For instance, Shaina N.C., a young designer from Bombay, claims not only to have invented 30 ways of draping a sari but also to give the sari a silhouette, transforming it from a boring cliche into a sexy evening dress. "I am the only designer in the world to make the sari into a formal ensemble," claims Shaina. "With my innovations of readymade blouses and even corsets, saris are again becoming the rage if you want to look elegant for two to three hours." The sari is dead. Long live the sari