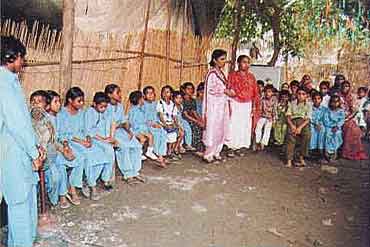 outlookindia.com
-0001-11-30T00:00:00+0553
Ten-year-old Satish Singh of Amritsar’s Pingal Wada society in Punjab has his day meticulously divided—he never misses his class in the morning and once back, Satish scavenges the garbage dumps of the holy city in search of whatever could be of interest to the local kabadiwala. He has also learnt to divide his "earnings"—a ragpicker ever since he can remember, Satish keeps aside some paper he collects from the streets of the city to do his classwork. Now, like any other child of his age, he’s preparing for his board exams. In the meantime, he can’t wait to see the books, uniform and bicycle his school has promised to buy for him.

Shanti, his classmate, however, has different priorities. She enjoys her school but is also aware of her duties—she leaves her class halfway everyday around noon to reach in time for her "second shift". She defied her parents by enrolling herself in school but only after promising that she’ll also work in about half-a-dozen local houses as housemaid. Shanti, obviously, is not happy but she’s not complaining—after all, she never even dreamt of attending a school regularly.

Shanti and Satish share their books at times, and the dreams, of about 50 other children of their age. They are all students of the Nishkam Sewa Public School, run by Sardar Singh, 50, the man who has shown these children life beyond the garbage dumps of the city. The school is Singh’s calling in life. Says this Food Corporation of India employee: "God has always been kind to me. When I started this school, everybody, including the parents, told me I am wasting my time. Earning a night’s meal for these children, they told me, could never go along with learning. But I knew that all these children needed was someone to give them encouragement, that extra push."

His search for like-minded supporters ended with the nuns from the local convent schools, and the Nishkam Sewa Public school soon became a reality in the ragpickers’ own locality. Says Singh: "You come across many who can only dictate things but when it comes to implementing them, they fall back. But my struggle has taught me never to give up simply because this world is full of people who want to do something for the less fortunate." When he started about three years ago, Singh was everything the school, and the children, could look forward to—he was the teacher, caretaker and even the sponsor of the books. Now, Singh deputes work—he’s got two teachers and 16 other committed friends with him, all of whom are helping the school grow. The first joint meeting of the school is expected to be held soon to decide on matters relating to books and the land available to the school.

There is also now a marked difference in the attitudes of the parents. The same parents who didn’t want their children "waste" their time in books initially are today equally worried about their child’s performance in the class. Even the slum where they live now looks different—it looks much cleaner and neater. Says Singh, "I started off by tempting the children with sweets and gifts in the morning assembly. We don’t need to do that anymore. All the children are so committed and enthusiastic about learning that now they come to the school on their own free will," and adds, "We celebrate all festivals and national holidays to develop the overall personality of the child. At the end of the programmes, the children want their photographs taken. Isn’t that a positive sign?"

Singh is happy that he’s no longer alone in his mission and "because there are so many who’ve come forward" to help him. The books and uniforms have now started coming more regularly from donors. In fact, Singh’s already making plans to provide the children with tea and snacks during winter. Thanks to the students’ enthusiasm, and the eagerness to learn, he does not even complain about the one-roof premises in which the school is functioning in the ragpickers’ colony. He knows that it is only a matter of time before his dreams are fulfilled. Singh can be contacted at Nishkam Sewa Public School, Adjacent to Civil Ward, Near Children Hospital, Ram Bagh, Amritsar, Ph: 0183-425607

Of Highlands and Lows