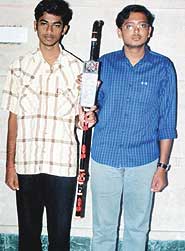 The two reticent teenagers from Karnataka’s Gulbarga had developed an electronic stick for the visually challenged a few years ago. The intelligent stick is a PVC pipe. At one end there are three light-emitting diodes (LEDs), on the left, right and one in the front, with three sensors placed above each. Infrared light from the LEDs hits the obstacle, bounces back to the sensors and converts into electrical signals that trigger the circuit placed at the stick’s handle. The circuit converts the electrical message into sound—each sensor producing a different sound—to alert the user. "The whole process takes one millionth of a second. Obstacles can be detected in the radius of five metres," say the duo.

And, an electrode-based moisture sensor at the stick’s front end is a puddle-detector!