Hair couture arrives big time in India, boosted by international brands and a will to splurge 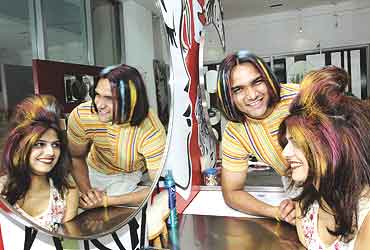 outlookindia.com
-0001-11-30T00:00:00+0553
After sitting it out in the reserve benches at Mohali, Shahid Afridi, poster boy of the Pakistan cricket team, decided to get a haircut at Sylvie's salon in Chandigarh. This as Afridi's team manager bought his hair some colour. One of those things that might have happened on earlier visits too. But the difference this time was spelt out large and clear by the reams of print that recorded Afridi's innocuous visit to a salon. To India's hair-savvy youth, this was a very important bit of news.

So then, here's news for the no-more-than-Rs 50-a-hair-cut cynic: Tress couture has arrived big time in India. The hair care industry, worth sales of Rs 1,800 crore a year, by industry estimates, is growing at a whopping 42 per cent per year. And international hair product giants like L'Oreal, Schwarzkopf, Wella and Keune are already selling highly customised hair products from hair salons across the country.

The Brylcreem generation is waning, making place for people whose hair lingo is sprinkled with hair wax, mousse, gel, frizz control, pre and post hair care products for straightening, perming and colouring that are further customised for different hair types and lifestyles. "Clients have so many options," says Monisha Naegamvala of Raih, who did the hair-makeover for Jassi. A complete contrast with most Indian salons of a decade ago where you only saw bottles of locally made evil-smelling glop while you got your hair trimmed to get rid of split ends.

Now even small towns boast of L'Oreal hair colour. The cosmetic giant has some 130 hair products, and plans to soon launch odourless hair colour this June. It has 4,000 hair salons in 70 cities and registered a 50 per cent growth last year, quite comparable to what the company is seeing in China, according to Vismay Sharma, director, L'Oreal Professional.

It's not the only company that reckons the future in India is as bright as one of its hair colour catalogues. German hair brand Schwarzkopf has 50-60 products in different categories like colouring, styling, etc, and has 50 exclusive salons.

Before Avaan Contractor (a celeb stylist formerly with Juice, a Mumbai hair salon) gave Aamir Khan the spiked look in the trendsetting film Dil Chahta Hai two years ago, India was ignorant of the fashion goldmine it was carrying on its head. The film acted as a catalyst that set off the hair reaction. "At the same time, the entry of foreign hair care products gave a much-needed impetus and we were thronged with clients who wanted to wildly experiment with their hair, no matter what it costs their wallet," says Delhi-based hair stylist Ambica Pillai who has been in the business for the last 17 years.

Undoubtedly, Bollywood has added inspiration to this trend. In their time, stars like Amitabh Bachchan, Sanjay Dutt, Sadhna, Dimple Kapadia decided the fate of a million hairstyles. Celluloid diva, the late Sadhna, was in fact immortalised with an eponymous cut that almost became the look of the nation. In the '80s, Dimple Kapadia with her crowning glory (styled by the famous hairdressers Nalini and Yasmin in Mumbai) had an entire generation of women queuing up at salons, demanding the Dimple cut.

Today, stars change their hairstyle with every movie or still faster, change it a couple of times within a movie. Actor Saif Ali Khan changed his look three times in Hum Tum (done by Savio of Waters, Mumbai) and Hrithik Roshan did it twice in Lakshya (by Adhuna Akhtar). Aamir Khan in Dil Chahta Hai, The Rising (styled by Slash Apeni, again of Waters) and Rang De Basanti dons different looks in tandem with the demand of the role.

A reason probably why more men are turning up at salons than women. Adhuna Akhtar, wife of film director Farhaan Akhtar who earlier used to be with Juice and now is going to start her new salon, B:Blunt, says, "Over the last five years, my observation is that men are more open to a change of look".

Kanta Motwani, who owns hair salons Kaya and Kromakay in Mumbai—with celebrity screen idols like Malaika Arora and actor Arjun Rampal as clients—agrees with Akhtar and adds that no one any longer has a bad hair day.

At any rate, thanks to the individualistic spirit of the times, the importance of looking different from others is at a premium. And nothing heralds a change in one's look as effectively as a new hairstyle. "There's a strong feelgood factor associated with a hair makeover," says Anniesha of Tress to Kill, Mumbai, which largely caters to a professional clientele. "I get clients who want to have a new cut because they think it's an essential part of looking presentable at work," she adds. 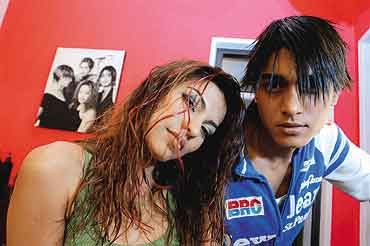 And this hair revolution is not limited to Delhi and Mumbai. Even smaller cities and towns are gelling with this trend. "The awareness of what's in is there but they lack infrastructure," say stylists at the Ravissant salon in Delhi. Be sure to run into John Abraham clones with badly bleached hair in smaller north Indian cities like Patiala or Meerut.

Interestingly, the reach of Bollywood-style hair mantras is not limited to the Hindi-speaking belt. In Chennai, girls who care to dare are getting rid of their naturally wavy hair and spending anywhere in the Rs 1,000-2,000 range to get their hair straightened in reverence of their screen idol Preity Zinta.

Although Kamalahaasan and Rajnikant remain ultimate style icons, says Wasim who works at the Habib's salon in Chennai, "The younger lot is even going for colour and red highlights."

In fact, it is interesting to see how people's hairstyle often speaks volumes about a city and its culture. In a cosmopolitan city like Mumbai, it's commonplace to see men and women in interesting and often striking hair colours and styles walking on the street. Meanwhile, most Calcuttans, barring a handful of nightclub regulars, still seem to hate the idea of tampering with their hair.

If clients are getting hair savvy, the hair stylists have to ensure that they are one step ahead. "Even small kids know exactly what they want," says Motwani. She recalls the visit of a very young client who wanted her fringe cut to just the length that she could blow away easily and look ultra cool.

Equally, the social position of a hair-dresser has risen dramatically. At upmarket salons, hair stylists come from more affluent backgrounds with a public school education. "More respect is associated with the profession," says Anniesha. They are well-groomed, well-travelled, keep updating their skills by attending seminars and workshops with international hair experts. And the change shows in how they conduct themselves.

"Before cutting hair, we ask about the client's professional/social background, his/her personal tastes apart from technical details like texture and health of hair," says Jawed Habib. Clients do expect stylists to inform them about the latest hair products, how to use them and which will suit them the most. After all, they are paying a pretty price at the end of it.

A cut or styling at any fancy hair salon costs anywhere between Rs 300 and Rs 1,000. Colouring would set you back some Rs 1,500-5,000 (the techniques and materials used vary widely). And processes like re-bonding (permanent hair straightening that's the latest craze), a four-hour process, can cost anywhere between Rs 8,000 to Rs 20,000. So, loosen those purse-strings, and let your hair loose.