Pointed criticism apart, the Congress senses support to its top panel on Kashmir. Political benefit too? 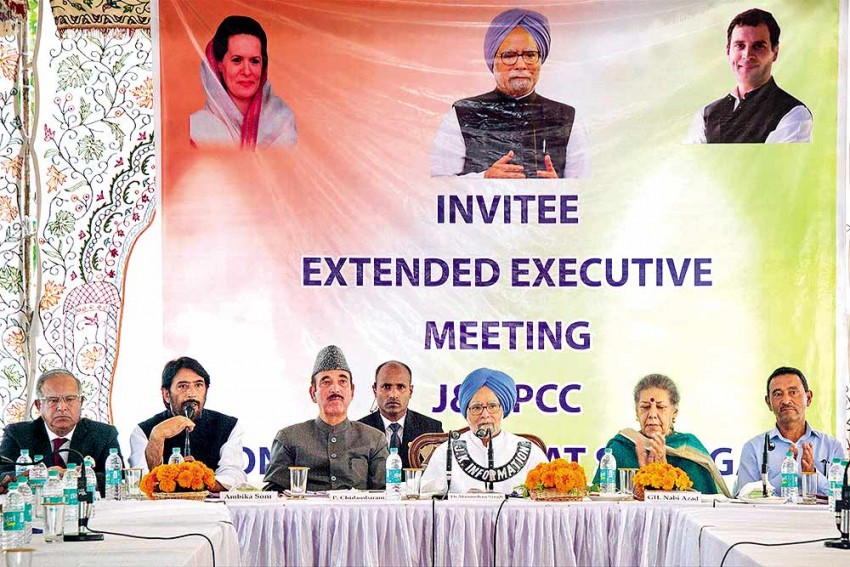 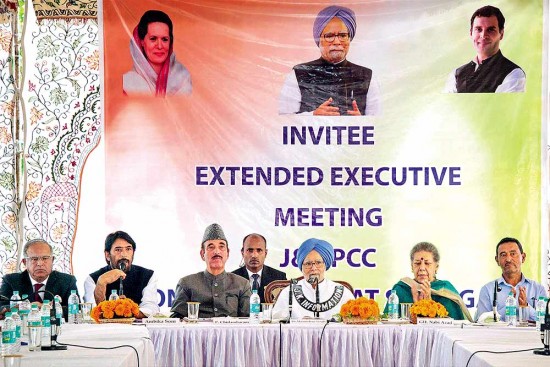 There is bright sunshine, as a delegation led by former prime minister Manmohan Singh int­eracts with members of the civil society. The location is by the sprawling Dal lake, on the lawns of the imposing Hari Niwas that had functioned as the infamous ‘torture centre’ in the 1990s soon after the outbreak of militancy in the Valley. Today, the palace outside which the Congress leaders are seated is a VIP state guesthouse on a manicured 5.6-acre plot.

The ex-PM heads a Jammu and Kash­mir Policy Planning Group, whose mem­bers are listening intently to varied requests, suggestions and observations by people from different walks of life. The varied backgrounds of the crowd have pleased the visiting team. Congress lea­ders like G.M. Saroori, G.N Monga and party state president G.A. Mir believe it signifies a huge transformation in the people’s trust in the Congress. “In my entire political career,” says Mir, “I have never seen such diverse sections meeting any political group from Delhi.”

The Manmohan-led panel, contrary to the experience of similar Congress eff­orts in the past, was called on by retired judges, bureaucrats and lawyers. It was also visited by groups and people ideologically close to Kashmiri separatists. “The Congress didn’t invite separatists or anyone else, but then the panel got suggestions from “people close to them (separatists) ,” says Mir. “The meetings were a good listening exercise; we are happy we heard everyone.”

Intelligence officers do concede that the nine-member panel, which was formed in April this year to understand the causes of the recent turbulence in Kashmir, heard unusual voices during its September 16-17 visit to the Valley. It’s another matter that most of the independent groups launched strong criticism against the Congress and the party’s role in J&K in the past seven decades. Yet, they ended up appealing to the leaders to safeguard the Constitu­tion’s Article 370 that provide special status to the state, and Article 35A.

“This is the difference between the Congress and other parties,” party leader Nawang Rigzin Jora tells Outlook, with reference to the panel that had earlier visited Jammu (September 10) when Union home minister Rajnath Singh was in the state on a four-day visit. “When we were in power, Kashmiris were demanding azadi (freedom). Today they want us to help safeguard the special status.” 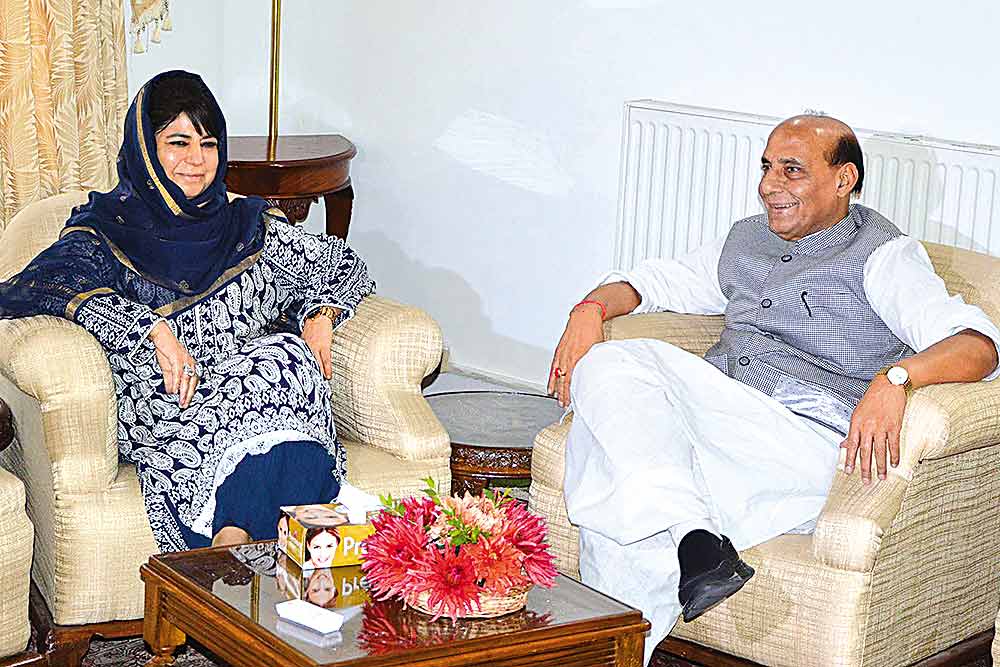 There is no word from the panel about the response from its members, comprising former union ministers P. Chidamba­ram, Ghulam Nabi Azad and Ambika Soni bes­ides state leaders including Mir. The party puts 62 as the number of delegates that interacted with the panel.

Among those who met Manmohan in Srinagar was Prof Hameeda Nayeem, who is wife of a separatist leader Nayeem Ahmad Khan. As the head the Kashmir Centre for Social and Development Studies, she accused the Congress of committing the “first murder of democracy” in Kashmir when it arrested J&K prime minister Sheikh Mohammad Abdullah in 1953. That, she notes, led the state to take a “reverse course since then”. All the same, Ham­eeda also sought help from the Congress to end alleged human rights abuses in the Valley and sought Congress party leader-­lawyers like Kapil Sibal to appear before the Supr­eme Court to defend Article 35A. The provision, which empowers the legislature to decide the state’s ‘permanent residents’ that entitles them to certain privileges, is being challenged by some NGOs, widely beli­eved to be aff­iliated to the RSS.

Others to meet the panel included former High Court judge Hasnian Masoodi, top ex-bureaucrat Shafi Pandit and former chief information commissioner G.R. Sufi. “We info­rmed the panel that the Congress has an added responsibility in resolving matters in the state, as it is in a way the architect of the Kashmir tragedy,” Masoodi tells Outlook. “Right from 1947 (independence and partition) to 1953 (removing Abdullah as the PM and imprisoning him) and subsequently, the party has only further complicated things for Kashmiris. It should initiate a result-­oriented dialogue with all stakeholders; that is the only solution.”

Among the critical years, Justice Masoodi highlighted 1965, alluding to an amendment the Congress at the Centre brought to the state’s constitution by ren­aming J&K Wazir-e-Azam (PM) as chief minister and Sadar-e-Riyasat (Pre­sident) as governor. Congress leader G.M Sadiq (1912–71) was J&K’s PM during 1964-65, when the positions were re-designated. Also, in 1984, prime minister Indira Gandhi toppled Farooq Abdullah’s government in J&K.

The Opposition National Conference visited the panel, while the ruling PDP and BJP simply ignored it. The Peoples Conference, a BJP ally, views the panel with contempt. Its leader, minister Sajjad Gani Lone, finds it “surprising that the Congress has discovered Kashmir” when the party is out of power.

Mir believes that the Congress move to send a Manmohan-led panel to visit J&K prompted the state government and the Centre to take “corrective” measures. “You saw the unscheduled visit of the home minister to J&K, and his huge reassurance (on Articles 370 and 35A). It is because of us,” he claims. The panel will visit Leh in coming weeks on a similar mission and prepare its rep­ort before the party.

One repeated request the Manmohan panel had during its Srinagar leg was to enable the J&K people to defend the Articles 370 and 35A.

Political observer Majid Hyderi also holds the Congress responsible for the current crises in Kashmir. He wants Chidam­baram, also a lawyer, to file a petition in the SC to defend the Article 35A. Mir is positive about such suggestions. Also, “everyone raised the issue of the working group recommendations and a report of the J&K interlocutors”, he says. “We have called upon the party leadership to own both the reports. We have also asked them to make this a part of the present exercise.”

In March 2006, Manmohan, had set up five working groups on J&K to start a roundtable dialogue. Separatists did not participate in the talks despite an invitation. A few working groups, including the one headed by Justice Saghir Ahmad, had recommended for an examination of the demand for autonomy in the light of the 1975 Kashmir Accord that permitted Abdullah to be the CM again. Another group, headed by the country’s former Vice President M. Hamid Ansari, had sought revocation of the Armed Forces (Special Pow­ers) Act in the state.

All the same, the Centre’s interlocutors—journalist Dileep Pad­gaonkar, academician Radha Kumar and former information commissioner M. M. Ansari—ruled out in their 2012 report a return to the pre-1953 position for J&K. But they recommended the setting up of a constitutional committee to review all Central Acts and Articles extended to the state after the 1952 agreement. No progress has been made on any of them.

Former minister Ghulam Hassan Mir, who leads the J&K Democratic Forum, says that he recommended the panel to ensure “minimum consensus” within J&K and the country at large about the Kashmir issue. “This will restore the trust between Srinagar and New Delhi forever,” he adds.

Congress party leaders say it is wrong to argue that nothing has been done. And point at various welfare schemes like Udaan, Himayat and PM’s Scholarship Scheme that are being implemented on the recommendations of the working groups and the interlocutors report. “The UPA was examining the interlocutors’ report when we lost power,” adds party leader Mir. “The Congress is deeply concerned about the deteriorating state of affairs in the Valley. We want the Centre to open channels of dialogue with all the stakeholders. The party alw­ays believes in resolving conflicts thro­ugh political means; we will press the Centre to take that line.”

Scenes From Up And Down The Stairs