Vajpayee is back with a bang. Should the party fret or fete him? 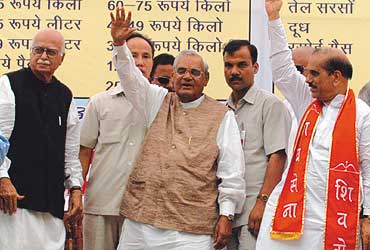 outlookindia.com
-0001-11-30T00:00:00+05:53
One of the great talents of Atal Behari Vajpayee has always been his peculiar economy with words. He speaks rarely and when he does the words are carefully chosen, designed to confuse or clarify as he deems fit. Yet, ever since the Rahul Mahajan drug scandal hit the BJP, the former PM has been very voluble. With one statement—"young people make mistakes when they fall into bad company; we will bring Rahul back on track"—Vajpayee forced the BJP to change its strategy of distancing itself from the family of the slain leader Pramod Mahajan.

A few days later he spoke again on Rahul—by now several BJP leaders had visited him in jail. And when Mahajan junior was released on bail he picked up the cue at his first press conference: "After my father's death Atalji is the father to me. The BJP is my family." L.K. Advani, meanwhile, kept entirely aloof and did not utter a word on Rahul.

Besides the utterances on l'affaire Mahajan there was other unusual activity on the Vajpayee front. Soon after the scandal broke the venerable 81-year-old leader decided to literally hit the streets. In the terrible June heat, Vajpayee took part in a BJP protest against the fuel price rise. He made a speech, participated in the dharna and courted arrest at the Parliament Street police station in Delhi. A sideshow of this protest was that over 50 BJP leaders and workers had their pockets picked and their cell phones nicked. But since Vajpayee carries neither a cell phone nor a wallet, he emerged unscathed!

Besides the physical exertions, there was considerable mental activity too. On June 20, Vajpayee, as chairman of the NDA, shot off a letter to President Kalam on the upa's Indo-US nuclear deal. The letter was of some significance for those who follow foreign policy matters. Strongly critical of the nuclear deal, it concluded—"We would like to state that such a deal cannot bind India in the future". In other words, the NDA would renege on the agreement were it ever to return to power. Apparently the handiwork of Vajpayee's former principal secretary Brajesh Mishra, the letter was drafted in impeccable language, in sharp contrast to some of the clumsily written statements by Rajnath Singh's office (particularly hilarious was Rajnath's letter to Pope Benedict XVI on conversions).

On June 21, the RSS-BJP began their first coordination meeting after Rajnath's anointment as president at Vajpayee's residence. Suddenly, it began to dawn on the faithful that, as he had once famously said, Vajpayee was "neither tired nor retired". Sources close to him gave further insights. Vajpayee's health, a matter of so much public scrutiny during his prime ministership, had improved dramatically. He was controlling his diet, had lost weight and the pain in his knees which required strong medication had got much better.

The source had this quip—"Does a politician ever retire?"—to further queries. Vajpayee has not only been visiting his constituency regularly, he had also sought information on what changes the delimitation process would bring to the Lucknow seat. He has clearly not ruled out a future battle. A former BJP president analysed Vajpayee's recent moves: "Atalji's main interest is to guard his legacy and reputation. He believes he has a place in history. If there is an opportunity he will take it. He is the only leader who can exercise the power of veto over the entire parivar."

Yet there is no escaping the fact that by the time the 2009 general elections take place, Vajpayee would be close to 85. The idea of him contesting another election must appear ridiculous to many. Besides, in December 2005 at the massive rally in Mumbai to mark the conclusion of the BJP's 25th anniversary celebrations, Vajpayee had declared that he would no longer take part in "chunavi rajniti" (electoral politics). He had then gone on to quote from the scriptures and make one of those open- ended statements about Ram-Lakshman (Advani-Pramod Mahajan?) that journalists spent days analysing. But everyone had presumed that this was indeed the final retirement speech. 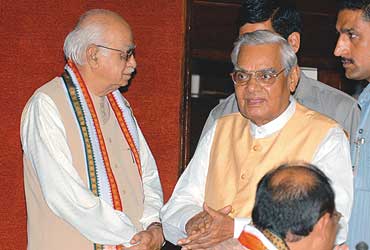 But it is perhaps a reflection on the state of affairs in the BJP that many still hark back to the glory of the Vajpayee days. With Rajnath Singh's presidentship proving lacklustre, the leadership crisis continues to torment the BJP. Vajpayee's face still dominates the media briefing room at the headquarters. And spokesman Prakash Javadekar says: "Atalji is still our most acceptable face. He is more popular than Sonia Gandhi. I don't think he has retired. He constantly guides us." Another senior BJP leader offers: "Advani may look fitter, but Atalji is more mentally alert. His responses are shrewd unlike Advani who has developed some fixations."

Consider the difference between the two. Advani has been shouting from the rooftops that he sees himself as a future prime ministerial candidate. Both the BJP and RSS have failed to push him into retirement. Vajpayee says he has retired yet gets active when he pleases, and calmly pushes the party into adopting certain postures. He still reserves the right to have the last word. He can retire when it suits him and come out of retirement when expedient!

In the midst of all this activity, Vajpayee calmly revealed to the world that he is writing his memoirs. As his six-year-long prime ministership had witnessed many dramatic events, speculation has already begun about what Vajpayee will reveal on sensitive issues. Did Advani scuttle the Agra summit? Who was responsible for the ham-handed handling of the Kandahar hijack? What did Vajpayee really think about Narendra Modi and the Gujarat riots? As a BJP leader quips, "Vajpayee can certainly embarrass Advani. But we know that he may or may not do that. We can only guess what he will write."